The Architecture of Detroit 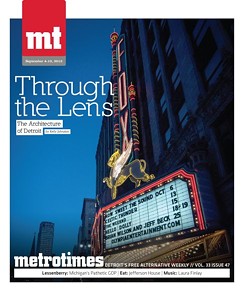 Detroit’s skyline is one of the most recognizable in the country. The architectural cityscape is notable in that Detroit boasts one of the largest intact collections of late 19th and early 20th century architecture in the country. Nearly all of the city’s skyscrapers were built in a five-year boom just before the Great Depression. Many of the buildings are listed on the National Register of Historic Places or designated National Historic Landmarks. The National Trust for Historic Preservation lists many more local buildings as some of America’s most endangered landmarks.

Many prominent architects have helped to shape the city’s landscape. The venerable Albert Kahn, known as The Architect of Detroit, designed nearly 400 buildings in the greater Detroit area during his lifetime; some well-known buildings include the Packard plant, Belle Isle Conservatory, Fisher Building and Cadillac Place.

Another well-respected architect who left his mark upon Motown, Ludwig Mies van der Rohe, was regarded as a pioneering master of Modernist architects. Lafayette Park, completed in 1960, is Mies’ only contribution to the city, but includes 26 buildings, which makes the community the largest collection of Mies buildings in the world.

As well, Minoru Yamasaki, widely considered to be a master of the New Formalism style — and who most famously designed the ill-fated New York’s World Trade Center in 1973, also designed several buildings on Wayne State University’s campus, including McGregor Memorial Conference Center and DeRoy Auditorium.

Detroit is also home to Yamasaki’s first high-rise building, One Woodward Avenue (formerly Michigan Consolidated Gas Company office). Interestingly, Yamasaki suffered from a severe fear of heights and, with that in mind, the World Trade Center was designed with narrow windows so workers didn’t get vertigo.

Some buildings have survived the test of time due to the luck of continued operations, like the Guardian and Fisher buildings. Other buildings, however, have not been as fortunate. The Book Tower, for example, has had a very tumultuous past.

The first owner defaulted on the mortgage. John Lambrecht, who had successfully renovated the Cadillac Tower, acquired the building. However, his untimely death bought renovation plans to a halt; Lambrecht’s widow tried, unsuccessfully, to gain momentum for the revitalization of Book Tower. After another exchange of owners, The Northeast Commercial Services Corporation, which was created for the management of the building, eventually defaulted on its mortgage loan, subsequently filing for bankruptcy in 2007. Two years later, the last tenant of the building moved out, leaving Book Tower to become one of the largest abandoned structures in the city.

Sadly, the Book Tower is just one of many instances where historic buildings are under threat due to foreclosure, vandalism, stripping and lack of funds for rehabilitation.

The Michigan Central Station stands as a glaring, constant reminder of architectural neglect. Other buildings under threat include Fort Wayne, Metropolitan Building, Grande Ballroom, and the State Savings Bank, whose owner wants to convert the property into yet another parking garage.

Detroit’s rich architectural history, like its citizenry, has been under siege for years because of neglect. As commercial interests continue to take advantage of affordable and prime real estate in the city’s core — and city government goes through its restructuring — perhaps the cityscape that has so captured the heart of preservationists can receive similar attention.

Adaptive reuse of a building is more cost-efficient than demolishing and building new. Reuse preserves community character— something that Detroit has in abundance.

If you would like to become active in historic preservation, seek out Preservation Detroit, preservationdetroit.org.

Kelly Johnston is a contributing photographer and writer for the Metro Times. Send comments to [email protected]

The Michigan Central Station, at the time of its construction in 1912, was the tallest rail station in the world. Designed by the same firm that designed New York’s Grand Central Station, the rail station remained in operation until 1988. The building was added to the National Register of Historic Places in 1975.

Beaux-Arts architecture was popular from 1880 through 1920. This style can be identified by the following features: A flat roof, statues and sculptures, mosaics and other artwork — all coordinated in a theme — to assert the identity of the building.

The Wayne County Building was constructed from 1897 through 1902. It has an ornate, Beaux-Arts style with elements of Baroque (the central tower) and Neo-Classical (the Greek pillars in front) architecture. The building was added to the National Register of Historic Places in 1975.

Built in 1907, the Bingley Fales House located in Indian Village is a prime example of Neo-Georgian architecture, which shares the same features of its original architectural movement. Georgian architecture gained popularity in the 1890s, lasting through the 1920s. Predominant features of this style include symmetrical windows, a heavily accented archway, and columned porches.

The Book Tower is a 38-story skyscraper built in 1916 as an addition to the original Book Building and finished a decade later. A taller Book Tower of 81 stories was to be built at the opposite end of the Book Building, but the Great Depression canceled those plans. The last tenant of the building relocated in 2009; the building has since remained vacant.

The Guardian Building might be Detroit’s textbook example of Art Deco architecture. Originally called the Union Trust Building, the building was constructed from 1928-1929. The building is part of a historic district, listed with the National Register of Historic Places and is a National Historic Landmark. Art Deco Architecture features geometric forms arranged in symmetrical patterns. The colors tend to be very bright and high-contrast. The Art Deco Style flourished from the 1920s to the end of the 1940s.