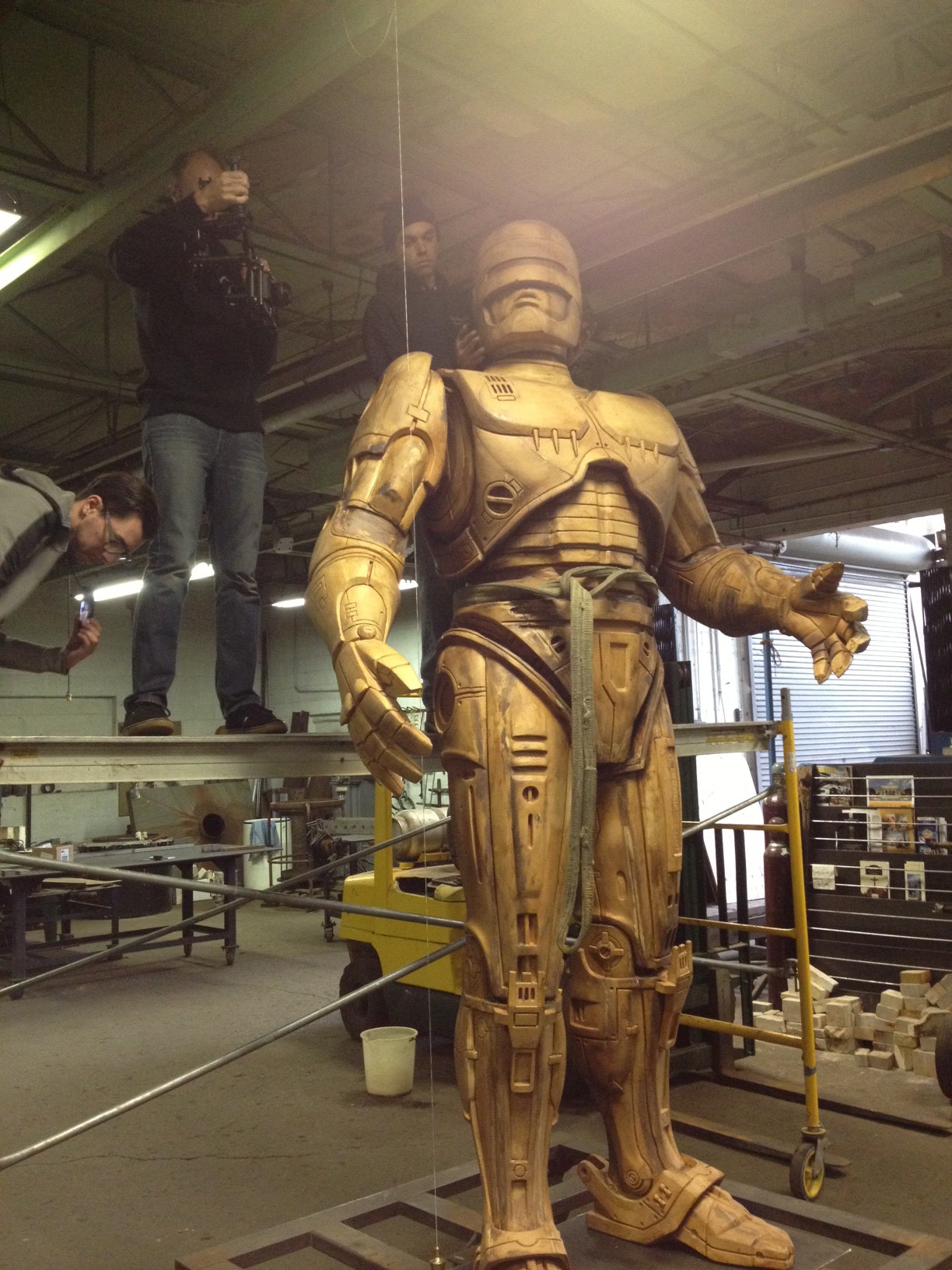 Sometimes, it seems like a work of art was just waiting to get made, its creation so seemingly effortless that it was just a matter of waiting for the stars to align and bring it to fruition.

Detroit’s RoboCop statue appears to be one of those things.

Not to discount the hard work of all involved — many have donated time, money and craftsmanship to the cause so far — but things have been moving swiftly for the planned monument celebrating the pop culture icon, with the statue on track to be completed this year.

It’s been nearly three years since it all started, when some random dude from Massachusetts (Twitter user @MT) sent then-Mayor Dave Bing a message, seemingly just for shits and giggles. “Philadelphia has a statue of Rocky,” he tweeted. “Robocop would kick Rocky’s butt. He’s a great ambassador for Detroit.”

Bing’s response was reasonable enough: “There are not any plans to erect a statue to Robocop. Thank you for the suggestion.”

Then the Internet went nuts. The next day someone had put up a Facebook page in support of the idea, and within 24 hours it had nearly 2,000 fans.

“It all happened very quickly, within a couple days,” says Brandon Walley, director of development at the nonprofit Imagination Station and creator of the Kickstarter page that raised funds for the project. “It was kind of serendipitous.”

It turned out the person who started the Facebook page was Walley’s friend, graphic designer John Leonard. “He was a big RoboCop fan, he was kind of more in touch with the cult of RoboCop,” Walley explains. “There’s this whole little subculture about RoboCop and people who really dig on that stuff.”

So Walley called up his friend. “[Leonard] said, ‘I was just about to call you, I had no idea this page would blow up. I know you guys do this sort of thing. Do you think that we should try it?’” Walley says.

Previously, Walley’s Imagination Station had tasked itself with demolishing abandoned homes in Corktown while raising funds for public arts projects like an outdoor putt-putt golf course. This was a bit more ambitious.

“We asked around a little bit, but we wanted to get the KickStarter up and strike while the iron’s hot,” Walley says. “[We figured] we could definitely find someone and get some sort of statue together for $50,000. How hard could it be?”

What followed was a whirlwind of activity, uniting fans of the campy ’80s sci-fi flick the world over. “It was literally a full-time job for a long time,” Walley says of the Kickstarter campaign. “We hit our goal on the sixth day for $50,000. We ended up getting a little shy of $60,000 by the end of the full 45 days.”

Cash in hand, the project would have gone nowhere if not for the ultimate blessing of MGM, who owns the copyrights to RoboCop. Help came from a mysterious phone call from Omni Consumer Products (yep, named after RoboCop’s evil corporation). Entrepreneur Peter Hottelet runs the real-life company that makes products based on movies — like Stay Puft Marshmallows from Ghostbusters or Sex Panther cologne from Anchorman — so naturally he was drawn to the project. He offered to match the first $25,000.

“He’s become a team member,” Walley says. “Because of what he does, he got us in touch with MGM. He’s basically been our legal team, making sure a bunch of kids in Detroit don’t screw this up. We could have been shut down if they weren’t on board.”

MGM even helped hook Walley and company up with San Francisco-based Fred Barton Productions, a licensed company that makes replicas of famous robots. “[They] had already made models, the perfect likeness,” Walley says. “We would have never known to have access to [them] if it wasn’t for MGM.”

Fred Barton Productions made the 1:1 scale model of RoboCop, which was then sent to Across the Boards Creations, which did a 3-D scan and blew it up to 10 feet. “It has a steel armature inside, but it’s covered in foam, plaster, wood, whatever they needed to get the exact detail,” Walley explains. “We had to put it together until we got the pose we wanted.”

The blown-up model arrived at Detroit’s Venus Bronze Works, where it was assembled into the final pose. It will then be cut into pieces in order for Venus Bronze Works to make the molds necessary to cast the bronze.

“We wanted to spend as much of the money in the city as possible,” says Walley. “[Owner Giorgio Gikas’] shop is world-renowned. Giorgio didn’t reach out, but when I finally hunted him down he was like, ‘Yeah, I was waiting for you to call.’”

It’s been a labor of love for everyone involved. “It was important for us that everyone gets paid for their expertise, but … we’ve been getting good rates,” Walley says. “Everyone involved wants this statue to succeed. Everyone is a huge fan of the project. ”

Walley admits there are a few variables left to sort out before the project is complete. They’re not sure what the market value of bronze will be. He’s also not sure if they’ll have to pay for an install, or to set up a fund so the statue can be cleaned and maintained every few years.

And then there’s the matter of location. The team still isn’t sure where the statue is actually going to go. “The goal is to have it obviously where anyone in the public can see it, where it’s safe, where it’s in a fun setting that makes sense within Detroit,” Walley says. “You can probably think about places downtown and around the city core where I could be talking about. It’s just kind of wait-and-see. We don’t have any written agreements with anyone.”

Walley thinks the project has already done a lot of good, showing people what’s possible with crowdfunding sites like Kickstarter. “There was a joke a few years ago that everyone in Detroit had a Kickstarter going,” Walley says. “[The project] did bring a lot of light to how you could do it. Whether it’s community gardens or something, it’s good to give people that idea.”

As far as people who think that Detroit has more pressing needs than a RoboCop statue, Walley shrugs it off. “Sure, that’s been there since day one. You know, I just counter that any city needs a lot of things for it to function, as well as the arts and community fun stuff,” he says. “This was backed by over 2,500 backers from around the world. This is a fun thing that they wanted to spend their money on. It’s entertainment.”

“This city, obviously we need so much,” he says. “But a fun pop-culture reference can’t hurt.”