The University of Michigan is celebrating the 50th anniversary of the Alternative Press with an exhibit of poetry and a talk by Ken Mikolowski, who ran the press as a husband-wife team with painter and printer Ann Mikolowski before she died from breast cancer in 1999. A piece or two on exhibit will feature the work of poet Jim Gustafson, a friend whose own papers will be joining those of the press at the Special Collections Research Library on the U-M campus.

It's not the first time Gustafson, who died in 1996, crashed a show honoring the Mikolowskis. (Full disclosure: Gustafson was the author's uncle.)

It's a meandering walk through the Detroit Institute of Arts to trace the path taken by the two guards who removed Gustafson from a 1990 poetry reading celebrating the 20th anniversary of the Alternative Press. What happened next is disputed, but what is agreed is that Gustafson, neither a small nor sober poet, did not cooperate with the pair of museum guards who escorted him out when he showed up to the event intoxicated. Outsizing the guards in stature and bravado, Gustafson reportedly struggled and sang a song in defiance. Recollections about the song vary; the museum is laid out differently now, but the route takes long enough that he would have had time to sing "Summertime" as he told Martin Gross on WEMU in a radio interview later that year, as well as "Roxanne" by the Police, which is another rumor poet Glen Armstrong heard.

Nearing the Farnsworth Street doors, Gustafson continued to fight against the guards. They got through the first set of doors, but during a tussle Gustafson's body broke through a second set of glass doors, cutting his arm, hand, and face. At the time, witnesses said the guards pushed Gustafson, but the museum disputed this account, saying Gustafson smashed the glass himself. A friend sped a bleeding Gustafson to Detroit Receiving, and the Alternative Press anniversary reading came to a halt.

"Poet's reading is 'smashing' success," a Detroit News headline read. One way or another, Gustafson's pants reportedly came off during the episode, giving the News a chance to explain the verb "mooning" to their readers. ("[A] term that denotes the dropping of one's trousers to expose the derriere as a sign of contempt," the paper reported.) Someone christened the bloody, shattered doors the "Gustafson Exit."

But few of the news articles even mentioned the Alternative Press by name; in the News report it was mentioned only in the last sentence and then only as the publisher of one of the injured poet's books, not as the subject of the exhibit and the night's honoree. The opening of the Alternative Press's retrospective show in the DIA's Ongoing Michigan Artists Program gallery had been overshadowed by photos in the newspapers of a cut-up Gustafson in a hospital bed.

Ken and Ann Mikolowski bought their press from the Detroit Artists Workshop in 1969, moved it into their own apartment, and began producing exquisite, gutsy letterpress poetry, art, and postcard series given away for free and in subscription mailers. The Alternative Press became a mailbox hothouse for poetry and artists, distributing collections of printed work. Soon the Mikolowskis moved the letterpress from Detroit to Grindstone City, a tiny coastal town in Michigan's thumb, and finally settled in Ann Arbor, taking turns being the one having to hold down a job and raising their kids Michael and Molly — all while printing work by an incredible array of American poets on postcards, broadsheet posters, bookmarks, and even bumper stickers, anything flat enough to print poetry on it.

The two became fixtures of Ann Arbor's literary scene. Ken taught at U-M, while Ann's paintings and prints were exhibited, sold, and even featured in a popular Absolut vodka campaign. When writers came to Ann Arbor for readings and events, there was a good chance they'd be staying with Ken and Ann. The Alternative Press published a few books of poetry, one of which was Jim Gustafson's 1988 book, Virtue and Annihilation. 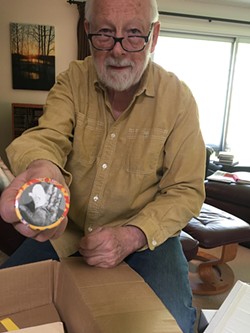 Good friends, the Mikolowskis and Gustafson all knew making a living in the arts was hard enough. It's described in the heightened wordplay in one of Gustafson's best known poems, No Money in Art, which ends: "But I gotta tell you Honey/ don't let it break your heart/ but there ain't no money, Honey!/ No Money in Art!"

But the daily struggle of being an artist responsible for more than oneself is illuminated in Mikolowski's poem "January in Detroit or Search for Tomorrow Starring Ken and Ann," from the book Big Enigmas printed by Past Tents Press in 1991. Mikolowski begins, "I think it is interesting/ though not exactly amusing/ how we go from day to day/ with no money," and ends up fantasizing about robbing a bank, but not the bank that knows them as the people who've already cashed the savings bond their kid got for Christmas.

U-M's archives contain correspondence between Gustafson and Ken Mikolowski trading feedback on each other's writing, reporting their luck at getting publications or reading gigs, and comparing the details of who might get paid what. Then, when the DIA incident was protested by a hundred or more at an event on the steps of the Kresge building across the street from the museum, the Mikolowski family was there, front and center. Ken and Jim both wore buttons made by Paul Schwarz depicting an image of Gustafson's bleeding, bandaged hand. Gustafson sued the city over the incident and won a settlement. Still no money in art, but some in damages.

So that was the 20th anniversary. The 50th should be a mellower affair, with a lecture by Ken Mikolowski and mementoes printed by Rebecca Chung on the Mikolowskis' original press, now enjoying new use in the Duderstadt Center on U-M's North Campus.

Free Poems and Functional Art: 50 Years of the Alternative Press is on view through June 2 at the Hatcher Graduate Library at University of Michigan; 913 S. University Ave., Ann Arbor; 734-764-0400; lib.umich.edu; a lecture with Ken Mikolowski will take place at 4:30 p.m. on Friday, March 15; the event is free and open to the public.