The festival, taking place May 25 through 27 at Detroit's Hart Plaza, announced on Thursday the lineups for its individual stages, which will feature the return of five stages of thumping techno, house, and hip-hop.

At the Stargate, old-school ravers can anticipate the return of Detroit favorites, Carl Craig, Octave One, Seth Troxler, Stacey Pullen, and a special b2b performance from Kevin Saunderson and his two sons, the Saunderson Brothers.

Over at the Red Bull stage, Movement fans can get their dose of hip-hop with Danny Brown and Gucci Mane, as well as "Latch" producers Disclosure, who make their return to the stage after a two-year hiatus. 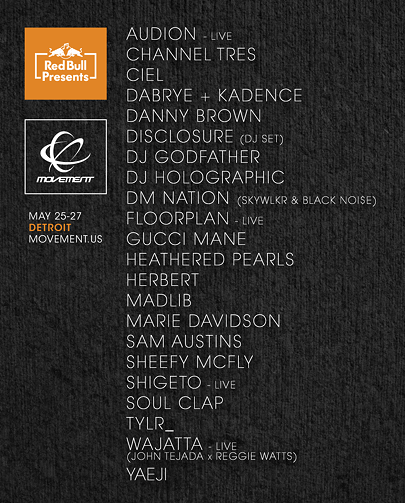 Deep underground at the Resident Advisor stage, the sounds of experimental and minimal techno will reverberate off the walls of Hart Plaza with the help of DJ Nobu, Heiko Laux, and the Movement debut of LSD, made up of DJs Luke Slater, Steve Bicknell, and Function.

And finally, the Pyramid will be packed with a party as some of the festival's most notable names stir up a crowd by the Detroit River, with popular acts like Richie Hawtin, Loco Dice, Tale of Us, and Nastia.

Get our top picks for the best events in Detroit every Thursday morning. Sign up for our events newsletter.
© 2023 Detroit Metro Times