Originally devised as a backdrop to help populate downtown Detroit during Super Bowl XL in 2005, the Winter Blast has now grown into a strong annual tradition featuring live music, a snow slide, and all the s'mores you can shake a stick at. Last year, the Winter Blast was made free and expanded to four weekends of wintry fun.

Folk yeah! For 43 years the Ann Arbor Folk Festival has showcased some of the most influential folk acts of our time, while at the same time shining a spotlight on up-and-coming strummers. In 2019, festival was headlined by baroque folk royalty Rufus Wainwright and recent Grammy winner Brandi Carlile.

The only time of year that running around in your underwear won't get you arrested. The Cupid Undie Run is both a charitable event and a cheeky one.

Got ink? The Motor City Tattoo Expo is not your typical gun show. This event draws tattoo aficionados from all over, featuring seminars, vendors, live music, and, yeah — tattoos.

Since 1952, the grit, grease, and muscle of Autorama has been known as America's greatest hot rod show. The event offers a glimpse at custom rides, celebrity guests, car tips, demonstrations, rockbilly, and pinup girls.

It's only fitting that a city as unique as Detroit would host such a devilish event. Though a relatively new tradition, the Marche du Nain Rouge is a Mardis Gras-style fête where the city rallies together to banish the dreaded "Red Dwarf" of local lore. (If you want to defend the misunderstood imp, you're welcome too.)

Calling all cinephiles! Now in its 57th year, the Ann Arbor Film Fest is the must-see event for lovers of independent and experimental film. 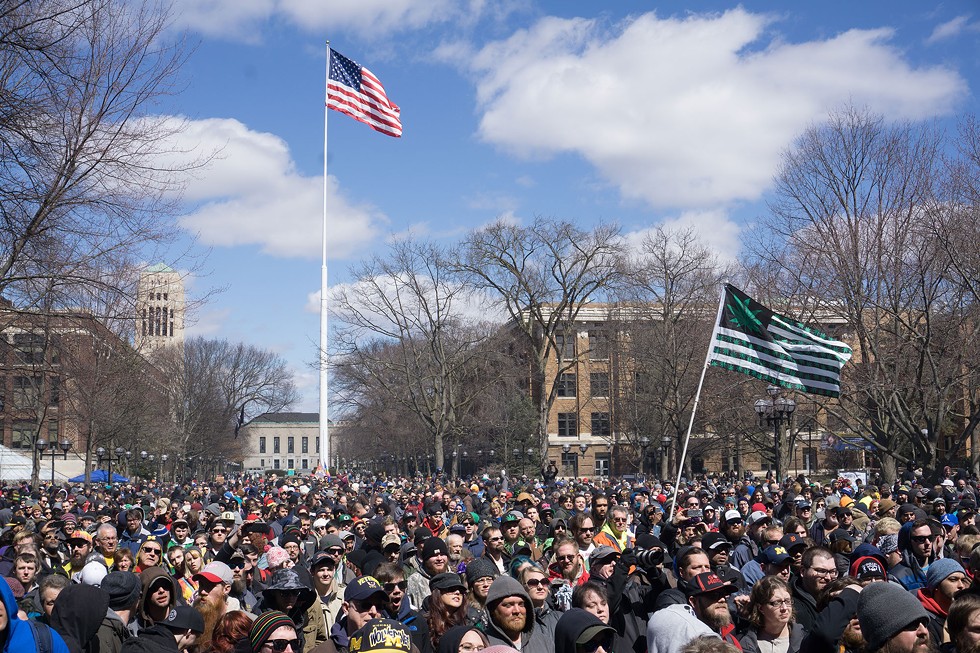 If you've never been to Detroit during the Tigers' first home game of the season, you probably don't understand what the big deal is. Head to the city and you'll encounter swarms of metro Detroiters drunkenly partying in bars, under tents, or in the streets. Oh, and there's baseball.

Celebrate weed's newfound legality in Michigan with the 48th Ann Arbor Hash Bash. Held each year on the first Saturday of April, the Ann Arbor Hash Bash is a toking good time. The herbal celebration preempts 4/20 festivities with this annual blowout of all things marijuana-related.

On FoolMoon, the streets of Ann Arbor are invaded with illuminated costumes and contraptions. On the sister event FestiFools, a "flash mob" army of papier-mache puppets takes to the streets for one kooky celebration.

OK, so it's not in Michigan but thanks to our neighbors to the North-ish for putting on dozens of plays each year with an emphasis on Shakespeare. The Stratford Festival is North America's largest repertory theater company.

It's an art thing, baby. Since its inception in 1964, the East Lansing Art Festival has morphed into a community undertaking that offers hundreds of artists, performers, and craftspeople the chance to show off their work to thousands of art-hungry visitors.

It's all the rave! Lovingly referred to by electronic music fans as "Techno Christmas," the annual Movement Electronic Music Festival draws fans and DJs from all over the world. Considering that Detroit is the undisputed capital of techno, there's only one place you should be Memorial Day weekend. Previous years' headliners include Carl Craig, Kevin Saunderson, Claude VonStroke, the Wu-Tang Clan, and deadmau5's techno alter ego, Testpilot.

Celebrating the finest acts and artists from metro Detroit — of which there are plenty — is the annual Detroit Music Awards. From blues and jazz to garage rock and folk, the Detroit Music Awards recognizes local trailblazers and music makers with a soiree worth dressing up for.

Hoist up those rainbow flags, Ferndale Pride is taking over. The event is the annual celebration of our local gay, lesbian, bisexual, transgender, and intersex communities.

Hey, y'all. Brush off your cowboy boots and brush up on your two-step; the annual Hoedown returns. Full of country-fied entertainment and vendors galore, the Hoedown ropes in thousands of country music fans.

Let your pride flag fly! As Michigan's largest pride event, Motor City Pride turns up with an average of 40,000 participants to celebrate the LGBTQ community with a blowout like no other.

The Art of Fire Festival

Are you ready to kick some serious glass?! What's a more metal way to celebrate the many artistic creations forged from fire than a fire festival? The annual Art of Fire Festival features over 100 artists working in clay, glass, and metal, and hosts live glass blowing, metal working, and workshops.

Once again, a psychedelic neon hippie commune is erected in rural Michigan featuring electronic music, jam bands, and a literal electrified forest for all of your tripping needs. The Detroit riverfront comes alive with music, special events, food, and plenty of activities for the kids. It's also a great way to see how the city's RiverWalk has transformed the waterfront over the last 15 years.

Each year, the Fourth of July gets an early introduction with a bang — lots of them. The big blowout takes place just ahead of the holiday along Detroit's scenic riverfront. Leading up the showdown in the sky, a festival takes up the boardwalk with a carnival, music, and other special events.

If you can't help falling in love with "The King," Elvisfest is for you. Celebrate the hunk of burnin' love with some of the country's best Elvis impersonators.

It's all going down — Downriver that is. The 58th annual walkable art-filled event annually enlivens the heart of Wyandotte, offering live music, greasy street fair-style food, and, of course, unique hand-crafted artwork from local vendors.

Name a more iconic duo. Go ahead, we'll wait. Pig and Whiskey offers up some of the area's best barbecue joints paired with whiskey, beer, and a music lineup that is sure to keep you roasted.

Put a clock on it. This con serves up the ultimate steampunk experience.

Stroll the streets of downtown Ann Arbor to browse a dizzying display of contemporary fine arts and crafts in one of the country's top-ranked art fairs.

Crack a cold one. (In fact, grab us one.) Escape the summer heat with a celebration Michigan's best local brews.

Huzzah! Rejoice as medieval worlds once again clash with fantasy realms for the ultimate throwback reverie. Costumes, jousting, and turkey drumsticks shall be plentiful.

The best damn traffic jam, the Woodward Dream Cruise combines classic cars and the cruisers that love them at this annual parade down metro Detroit's main drag.

Nothing can stop the 160-year-old family-friendly state tradition. The Michigan State Fair may have been canceled in 2012, but it immediately rose from the dead with all the family-friendly fun you've come to expect.

Good things come in threes. Such is true of the Arts, Beats & Eats festival. Local artists, acclaimed national music acts from past and present, and some of metro Detroit's best restaurants come together for a tasty experience.

Dally in the Alley

Celebrate the spirit of the Cass Corridor as a historic block is cordoned off to make way for multiple stages, vendors, artists, and libations. The event is a Detroit staple, running strong for more than 40 years.

For four decades, Hamtramck has put on a weekend-long Labor Day festival boasting local acts across all genres.

The city of Rochester transforms the 30-acre Rochester Park into one of the nation's top fine-art fairs with over 290 exhibiting artists from across the country.

Murals in the Market

Each year, Detroit's Eastern Market district gets redecorated with a fresh coat of paint thanks to muralists from Detroit and beyond, who are tasked with creating new artwork during the annual Murals in the Market festival held in September. You can drive or walk through the streets of Eastern Market to take in the sights yourself — making the market a feast for the eyes as well.

You can do it yourself without doing it alone thanks to the DIY Street Fair in Ferndale with live music, food, and vendor booths hawking all manner of art.

The freaks come out at night — well, technically they come out for two weekends every October as the Masonic Temple is transformed into a wicked wonderland, and the "Greatest Masquerade on Earth" commences just in time for All Hallows' Eve.

Head over to Eastern Market to sample the finest craft brews the Great Lakes State has to offer. The event boasts more than 800 craft beers from nearly 120 Michigan-based breweries, tasty food from several Detroit area restaurants, and live music from local musicians.

Detroit is home to one of the country's largest and most spectacular parades, America's Thanksgiving Day Parade, which lures hundreds of thousands of spectators along historic Woodward Avenue to take in the larger-than-life sights.

This well-established craft fair is absolutely enormous and, arguably, the best of the bunch based on its sheer size. It usually takes place at Detroit's Masonic Temple for two days in early December.

All is calm, all is bright. Welcome to Midtown Detroit's beloved Noel Night, a cherished tradition of more than 40 years. You can catch carolers, ice sculptors, horse-drawn carriages, and more, all while making your list (and checking it twice) because, yes, the shopping is out of this world.