Metro Detroit has a bunch of new brunch

Metro Detroit's already-strong brunch game has gotten even stronger, with the past year seeing the number of restaurants with brunch offerings expand. That's good news for those who need something a bit heartier and boozier than a bowl of cereal to start your weekend. Here are six new spots to make sure are in rotation. (You can catch some old favorites as well as some new ones at Metro Times' United We Brunch, which will be held from 11 a.m. to 2:30 p.m. at the Majestic Theatre Complex; 4140 Woodward Ave., Detroit; mtbrunch.com; Tickets are $40-$55, VIP tickets available for $60.)

Ferndale's psychedelically designed restaurant and music venue expanded with brunch offerings late last year. Early(ish) risers can expect the same fanciful touch applied to the dinner and decor in the brunch menu, which is served 10 a.m. to 3 p.m. on Saturdays and Sundays. Menu highlights include the Cinnamon Crunch Sourdough Pancake; a PBLT with chile-honey-glazed pork belly, greens, woodfired tomatillo, spicy cranch, and grilled sourdough; and Steel Cut Oats "Risotto," all served alongside staples like ham and cheese croissants and yogurt and granola. The ever-evolving spot also rolled out a monthly musical brunch in January called Sunday Sessions; the next one will be held on Sunday, Feb. 24 featuring music by Braxton Hicks & the Contractions.

Capitol Park burger joint Lovers Only opened this walk-up breakfast window late last year, and as they did with Lovers Only, restaurateur Eli Boyer and chefs Jennifer Jackson and Justin Tootla favor a simple, no-frills menu here. The spot serves up breakfast sandwiches with meat options including sausage, bacon, ham, vegan sausage, or turkey, and sides include yogurt and granola, hash browns, coffee, and fresh-squeezed O.J. You can catch it 8 a.m. to 11 a.m. weekdays and 9 a.m. to noon on weekends.

After a brief hiatus, Eastern Market's Gather brought back its brunch menu in June. From 9 a.m. to 2 p.m. you can catch chef Jessi Patuano's brunch menu, which features items like pastries with lavender butter and jam, flapjacks (or "flaps"), potato hash, a simple 2x2x2 (two eggs, two meat, and two slices of toast), or smoked country ham with pimento cheese. The spot is perfect for a shopping day stop.

Specializing in oysters, this spot, helmed by chef Emmele Herrold, opened late last year with a brunch menu right out of the gate. Its menu is divided into three themes that play off of its name: Hazel (familiar), Ravines (well-traveled), and downtown (trending). The first two menus contain plenty of the sorts of dishes you'd expect from brunch — flapjacks, bacon and eggs, omelets, Dutch pancake, huevos rancheros, and the like. On the Downtown column, you'll find items like the Liquid Lunch — Bloody Mary and oysters. Brunch is served from 9 a.m. to 2 p.m.

The House of Pure Vin

This downtown wine spot is launching a jazz brunch every second Sunday of the month. The first one, slated from noon to 4 p.m. on Sunday, Feb. 10, will feature a menu prepared by chef Cedric Andrews including brunchtime favorites like chicken and waffles, shrimp and grits, omelettes, asparagus salad, and more. As for the jazz, the soundtrack will be interpretations of Duke Ellington performed by the Mario Sulaksana Group. Tickets are $35 and are available for purchase at eventbrite.com.

Kiki Louya and Rohani Foulkes, the owners of the next-door Farmer's Hand market, expanded last spring to launch this all-day brunch spot. The Australian-inspired menu features items like herb-infused milks, the "Big Brekkie," gluten-free waffles with pistachio-citrus butter, and meat pies. Even better: Folk pays its workers a living wage by automatically adding an 18 percent hospitality charge, so tips are not expected. Hours are 8 a.m. to 4 p.m. on Monday, Wednesday, Thursday, and Friday and 9 a.m. to 4 p.m. on the weekend. 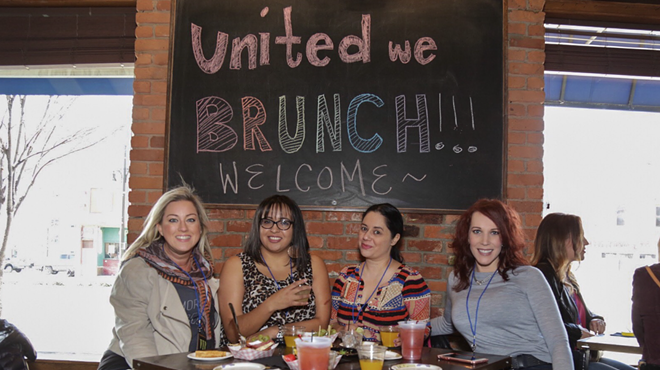