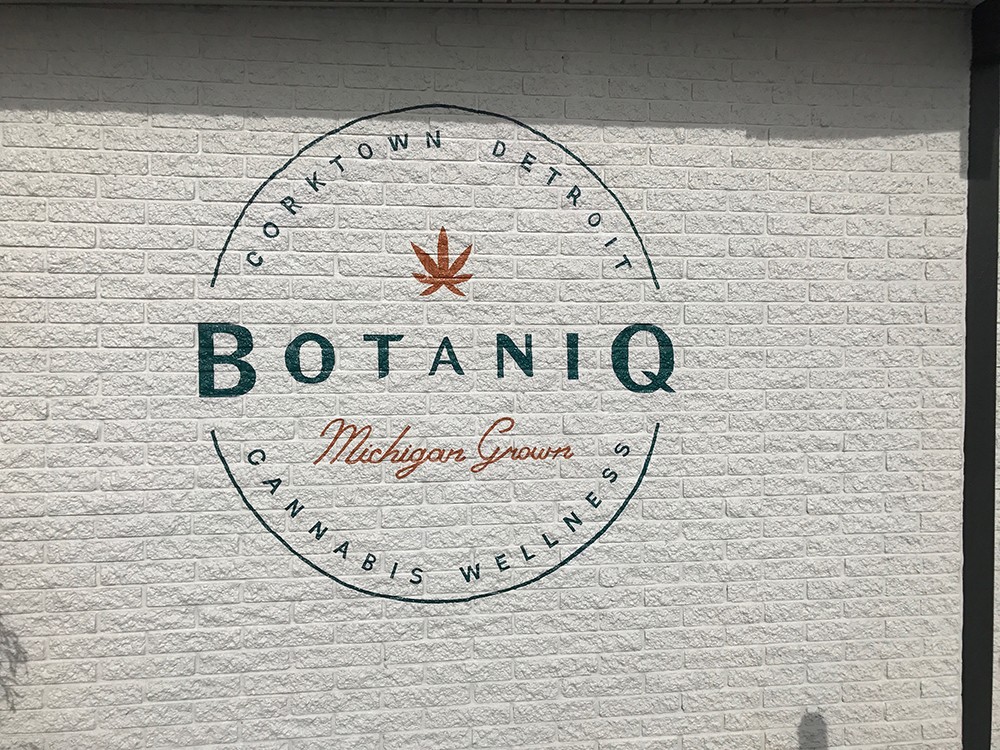 BotaniQ is the kind of name that stirs up visions of verdant vistas painted by flowers in their colorful whimsy. Planted on the corner of I-75 and Rosa Parks Boulevard in Corktown, the main vista at Detroit's BotaniQ is a stretch of interstate with lanes multiplying before it splits, with I-96 heading toward Lansing.

The only visual whimsy on the low, neat building is the unassuming signage marking the medical marijuana provisioning center.

The building and its parking lot sit behind a wooden privacy fence. There are no garish green lights festooning the facility. The owners even passed on joining Detroit's Project Green Light because the neighborhood safety program requires businesses to display a green light. Anti-marijuana activists have developed a particular dislike for the bright green lights that have adorned many provisioning centers.

"We're trying to be very subtle," says John Petropoulos, one of a group of six owners of BotaniQ and affiliated businesses.

So far so good on that point. Petropoulos presents a sober and business-like approach to a sector fraught with a lack of operational definition. Although he is from Flint, Petropoulos is most recently from Colorado where he is in the oil business. He's been watching the marijuana industry and going to conferences to figure this stuff out.

He's not making predictions, but Petropoulos does want to make sure that the company does things right and be cognizant of lessons learned. The BotaniQ location is part of a vertically integrated seed-to-sale operation with a Class C growing license (1,500 plants) and a processing license. Those facilities are housed in one building in Warren. The grow, processing, and provisioning center are all managed by 2540 RP, LLC.

This is the business associated with Richard and Anqunette Jamison-Sarfoh, who are co-owners. Anqunette is a former Fox 50 news anchor, popularly known as Q. Expect to see that capital letter on products around the place.

Rafael Blake, a co-owner of the Marble Bar nightclub, and Vincent Mazzola, a Corktown-based real estate agent, are the other owners along with Shannon Petropoulos, John's wife. They plan to grow the marijuana flowers, make the edibles, and sell it all in their own retail location — although the first of their own-grown products won't be on the shelves for a few months, as their grow operation just got going.

That was spoken by someone who has been through the gamut this past year with the state, and come out the other end with licenses. Given the heavy hand of the Michigan Medical Marihuana Licensing Board, any owner who isn't about compliance isn't going to have a license in Michigan. One of the issues for operating business owners was a gray area in which the MMMLB was coy about saying if operating an already open provisioning center would invalidate your chance for a license. The BotaniQ folks stayed clear of that.

"We waited to open and didn't open in the gray area," says Blake. "We waited the whole time, got all the proper approvals, got all our inspections done, and made sure about the tax implications [before opening.]"

Both of the properties — 3,200 square feet in Warren and 2,700 in Detroit — were gutted and renovated. The group has spent more than $2.5 million so far. The space in Warren was rebuilt as a clean room, with all the sealers, filters, humidity control, and stuff to keep molds, and fungi, bugs, and whatnot out. The space on Rosa Parks was vacant for some 15 years with all of the attendant dilapidation and trash.

Now it's all clean and neat and very unassuming. Inside everything is white and stainless steel-looking, except for some rugs adding color — and the cool marijuana leaf motif that appears around the place. It's spacious, which is a distinct contrast to the cramped quarters of most of the eight or so places around town I've been in.

As far as their supplies, BotaniQ is facing the same limitations as everybody else due to the disruptions caused by hiccups in trying to switch over to the new state licensing system. Previously, provisioning centers were supplied by caregivers.

Nobody seems to have high CBD Simpson oil. But there is a lot of CBD around in tinctures, as well as less potent oils. It's also available in a new form that I was formerly unfamiliar with. CBD isolate is a crystalline powder that is 99 percent pure CBD. Now, I'm a synergistic effect guy who believes that at least a little THC mixed in with your CBD makes it more effective. But at the price and volume of CBD available as isolate, I can do a little mixing myself.

Maybe it's just that they recently opened, but the prices at BotaniQ are lower than I've seen them at other places. Over on Eight Mile Road I saw CBD isolate at $55 for just a half gram. BotaniQ's price is less than that for a full gram. When I went there as a first-time customer I got a free gram from their $7-$8 budget buds. I also bought a gram of their top-of-the-line bud for $18 and some change. You know how the comparison test went between those two.

Their high THC Simpson oil costs substantially less than I've typically seen it elsewhere. The same thing goes for a THC distillate in a vape pen cartridge. I don't know how the pricing system works, but I do know that when a store first opens prices tend to be lower and they go up later.

So we'll see what happens here. When all of the taxes and transport fees and whatever else kick in, I expect a price uptick.

I'm sure there are other places in town with big ambitions. So far this is the only one I'm aware of that has licenses to create product from start to finish. This is a new industry in the state, and with a new adult use law passed just weeks ago it's going to get big fast. I've been waiting to see what it looks like. So far the view from BotaniQ looks good.