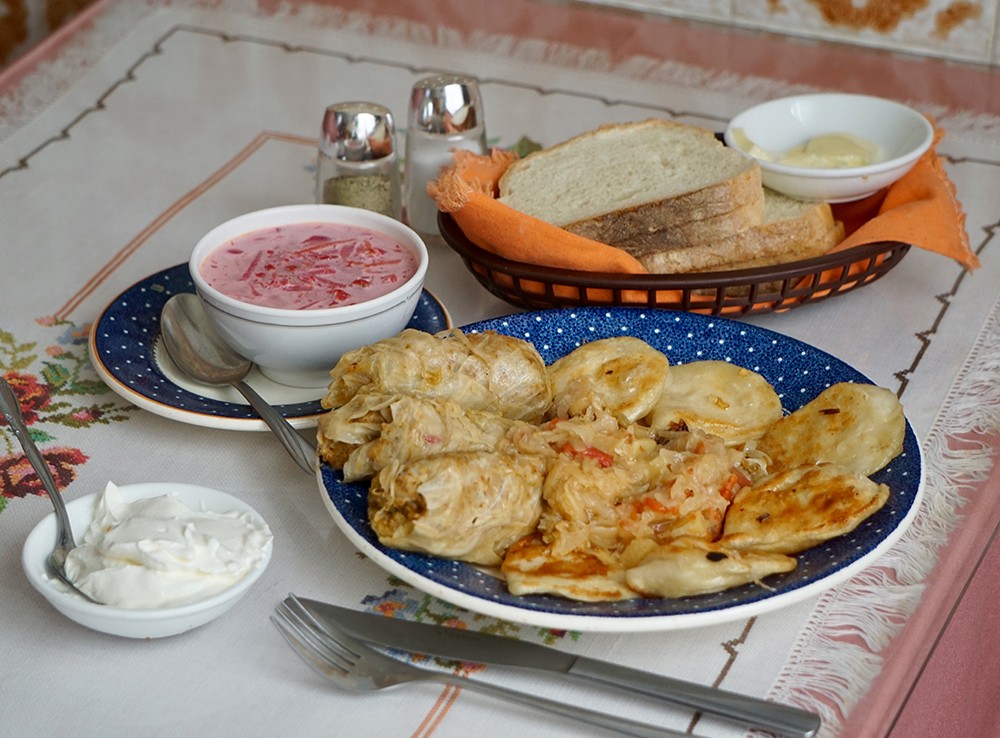 It happens every year. On one of the first days that really feel like fall, there's something in the air that triggers your cravings for a good, hearty meal. And with our Michigan September's heralding of the imminent miserable weather, the shift of one's appetite isn't so gradual. Much like a Tiger's opening day heralds hot dog season, a brisk autumn morning opens up the season of stew.

At any rate, there's a wonderful place in Windsor you should visit. They serve great stew.

Upon entering the front door, I'm quick to notice that the lights haven't been turned on yet, despite opening six hours earlier. There's no host, no servers, and no music. The pink booth seating — maybe a couple dozen seats in total — has aged well, developing a tasteful fade over the years. The walls are adorned with '60s style wallpaper and family heirlooms. Photos of the owners' grandchildren rest atop a piano fallboard, and a stationary exercise bicycle that looks like it hasn't seen action in some time rests next to a six-seat counter. The only thing that looks relatively new is a black refrigerator next to the service counter that houses beverages. The restaurant is impeccably clean, and really feels like you're in the living room of your friend's grandma's house.

The only other patrons of the restaurant are a four-top of elderly folks seemingly on a double date, one of which is going over the menu with the sole employee of the Ukrainian Restaurant, Anna Momcilovic, who opened her doors 50 years ago. She's the hostess, the server, and the cook. The kitchen itself is full of decades-old cooking equipment, and there's only a single stockpot currently in action on the range. I turn the dining room lights on as the sun is beginning to set. An elderly Canadian man gives me a thumbs up and an assuring wink. He returns to trash talking Donald Trump.

A chalkboard menu hangs on the wall next to the service window, where every menu item has the word "or" in it and the prices have aged well. The "special" reads "2 Rolls, 6 Pierogis, or Lasagne" for $4.00, the "sausage with Kraut or Ribs" comes to $9.00, and the "Roast Pork or Beef Stew" — the menu's most expensive item — tops out at $9.50. The restaurant is expectedly cash only.

Momcilovic asks, "You like borscht?" with a creaky jubilance. We order a couple combination plates, three menu items for $10. I ask about the nearest ATM and she starts telling a story about a couple from Detroit who came over some time ago and forgot to get cash. "He was gone for thirty minutes!" she says, explaining how there's no close ATM. "How much cash do you have?"

"Two combination plates is only $20! You'll be fine!" she says with slight urgency to get to work.

The borscht comes out first — it's bright pink from the sour cream mixed into the soup. No fancy garnishes, no added-value "wow" factor — just soup in a bowl. It's simple and delicious, light and hearty, with rich vegetable and dill flavors. The sour cream cuts the acidity just right and the shredded beets maintain a decent amount of crunch. I can hear a microwave beeping, which means our bread basket is ready.

Our combination plates come out soon after with six boiled potato and cheese pierogi and a generous helping of sour cream, sausage with kraut, cabbage rolls, and stuffed peppers. Again, no garnishes or anything that would trick you into thinking the food is better — just honest food on a plate.

There's something to be said about a restaurant's atmosphere, in the sense that the food can taste better if you're enjoying the dining experience. When you're dining at Ukrainian Restaurant, Anna is your grandmother and you are having dinner at her place. Nobody makes borscht like her. I kept wanting to ask if I could help clean up.

After our meal, I approach the service counter to square up. Momcilovic has fixed herself a plate for dinner. "No dessert?" she asks. I explain that we only have $24 in cash and we'd like to be able to leave her a tip. She explains that she would much rather have us try her torte than receive a tip. "You can tip me next time."

The walnut torte is a work of art. Perfectly moistened multi-layered cake and buttercream frosting that works with mocha, cherry, and vanilla flavors just right. Nothing too forward flavor-wise and just the right amount of sweetness. Served nice and cold. Fantastic.

While the food itself doesn't hold a technical candle to your typical fine-dining establishment, when you're here, you're eating so much more than food. You're eating generations of Windsor history, recipes that haven't changed in 50 years of Momcilovic's cooking. You're eating the fact that Momcilovic only goes to the market down the street and to her family's farm in Essex every once in a while. In a time when nearly every new restaurant follows some kind of social media approved formula for success, Ukrainian Restaurant reminds even the most jaded critics out there that there's nothing like a home-cooked meal at grandma's house, where dishes taste like they were perfected many years ago and never changed.