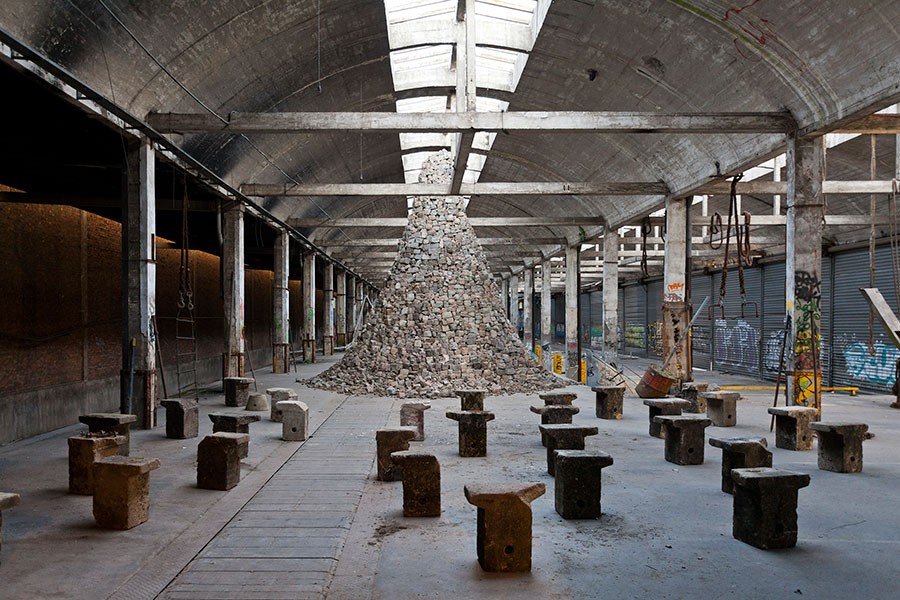 Artist Scott Hocking developed his style in Detroit when he was an undergrad at the then-Center for Creative Studies in the late '90s, creating installations in the city's abandoned spaces out of materials found there. But that doesn't mean Hocking is strictly a Detroit artist.

"What I call myself now is a site-specific artist," he says. "So I believe that with this style I work in, I can go anywhere and work this way. I can go anywhere on Earth and get ideas for a site and for materials and from history and from the people."

For his latest gallery show, Old — his first with the David Klein Gallery — Hocking hit the road. The exhibition focuses on photographs of installations created in three different sites: There's the animal bones he found in Australia in 2010, and the "Babel" tower he built out of planks and stones in an abandoned railway station in Lille, France in 2015. Closer to home is a trip to Port Austin in Michigan's thumb, in which the artist transformed an 1890s decaying barn into a surreal, vessel-like structure. Keeping with the Biblical themes, the project's formal title is "Celestial Ship (Ark)," but Hocking has taken to calling it simply "Barn Boat." ("Because it's fun," he says.)

But unlike Hocking's other installations, which are typically ephemeral and subject to destruction at the hands of nature or humans, "Barn Boat" is still viewable. "It'll take a while before it vanishes," Hocking says. "I noticed it's starting to lean. It's becoming a bit like the 'Leaning Barn Boat of Port Austin.'"

Though the David Klein show is primarily made up of photographs, Hocking says he does plan on making one site-specific installation at the gallery. "I just kept coming back to themes of time and age, my time here, and how long I've been doing this, how a lot of my projects end up dealing with time and death and rebirth and transformations," he says of inspiration for his David Klein installation, which was based on a dream he had shortly after visiting the Art Basel art fair in Miami last year.

"It was a typical artist experience there, where you might have fun at night going out, but when you're there during the day you see in full force the most grotesque aspects of the art world, the things as an artist where you kind of cringe at," he says. "Then I had a dream where I filled a gallery with bones — human skeletons. I started to interpret and read into it and my feeling was it was about this disgust I had about the art world that led to this feeling that it's all death, and bones, and people upon people, and that nobody cares. It was a very grim dream, but it led to thinking about how I could interpret that for exhibitions."

Hocking comes short of revealing whether he's planning on filling the David Klein Gallery with human bones, but does say that the overall exhibition is concerned with themes of "how we perceived humans in the past, and how we'll be perceived by humans in the future."

"I really think humans keep doing the same dumb shit on Earth and never really learn from the past," he says. "I think we think we have progressed and look back on more 'primitive' societies like we're better and they weren't as smart as we were. ... I want people to reflect on it. Are we any different? What makes you think we're any better?"