Spring is finally here, and Detroit has the daffodils to prove it 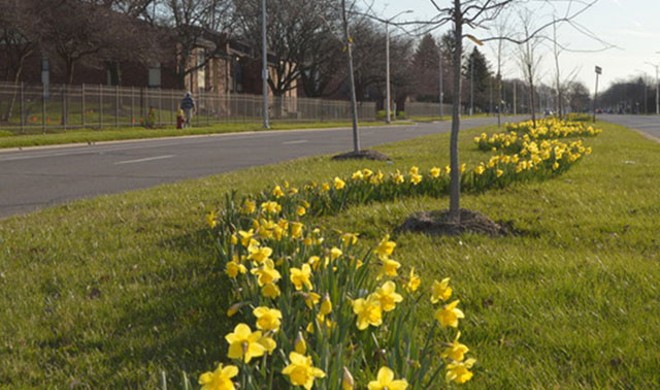 If your morning commute seemed a little prettier, it wasn't an accident. A city-wide initiative to beautify Detroit's neighborhoods is finally starting to bloom in the form of hundreds of thousands of daffodils.

Last week, some of the 265,000 bulbs that have been planted over the last few years began to emerge on medians and in parks.

Brad Dick, who runs the General Service Department for Detroit, says the city plans to have 1 million daffodil bulbs planted by 2020.

“City crews have done a lot of the basic things to remove the unattractive things Detroiters have had to deal with for years, like graffiti, illegal dumping and blighted buildings,” Dick says in a city press release. “Now we are transitioning to programs that actually beautifies our city. It all adds up to a more beautiful and attractive city for everyone.”

The program, which started in 2014 with a staff of four employees planting bulbs in Palmer Park, has become the ambitious citywide plan to beautify Detroit.

Daffodils must be planted in the fall and early winter in order to bloom in the spring. Only after the winter thaw will they begin to emerge from the ground.

If you want more information about where the bulbs have been planted, check out the city website. A map of the daffodils is below.

Jack Nissen is an editorial intern for the Metro Times and a masters student of environmental journalism at Michigan State University.