Anthony Spak
A line forms outside of UHF Records in Royal Oak during Record Store Day 2016.

Once a year, record hunters brave the early morning chill and long lines for a chance to nab exclusive vinyl releases as part of Record Store Day — the record collector's holiday.

Record Store Day began as a celebration of independent record store owners and employees in 2007. Now in its eleventh year, RSD will take place around the world on Saturday, April 21.

Here in Detroit, more than a dozen local record stores will have exclusive releases in stock, as well as discounts on their own rare used records and in-store performances to soundtrack a day of crazed music consumption. RSD 2018 releases from notable Detroit artists like Stef Chura, the MC5, J Dilla, Iggy Pop, the Stooges, Aaliyah, and Insane Clown Posse are on the list, along with hundreds of others.

Here is our own list of participating local record stores. Please note that some of the times listed are special hours for Record Store Day 2018 and do not apply to regular Saturday hours.

Dearborn Music 22501 Michigan Ave., Dearborn; 313-561-1000; Open 8 a.m.-9 p.m. Dearborn Music will offer a 20 percent off sale and will be stocked with Record Store Day 2018 releases — you can view their order list here. Dearborn Music has a strict “one of each release per customer” rule, so come prepared.

This Hamtramck shop will have getting a few orders of Record Store Day releases as well as a handful of local releases. Detroit Techno Militia will be performing throughout the day and a free barbecue sponsored by Farms is on the agenda.

If you’re closer to Flint than Detroit, Electric Crown is a possible destination for Genesee County vinyl hunters. This will be Electric Crown’s first Record Store Day event. Coffee and donuts will be available for the early birds.

Encore will be stocked with some of the more “off-the-beaten-path” RSD 2018 releases according to Michael Burbo, a clerk at the store. “We’re not offering the mainstream choices,” Burbo says, who is hoping to snag the latest volume of the Hillbillies in Hell comp.

coming to Clawson can expect a 20 percent off sale on used records and a performance from Izzy Wallace. If you’re looking for titles from local artists, check out Flipside’s excellent selection of vinyl, CD, and cassettes from nearby independent musicians. 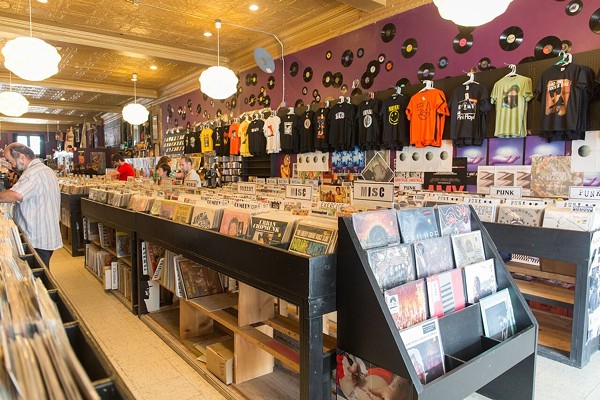 Found Sound 234 W. Nine Mile Rd., Ferndale; 248-565-8775; Open from 10 a.m. until bands end. This downtown Ferndale record store is expected to be busy. “We open the doors at 10 a.m. and the line is our primary focus,” says founder Raymond Hayosh. “The Led Zeppelin 7-inch, the Pink Floyd The Piper at the Gates of Dawn mono, and the David Bowie releases are things I know people will be losing their mind over.” Hayosh also added that he is “stoked” for the Trash Brats and Pagans RSD 2018 reissues. Five in-store performances are scheduled at Found Sound. Sister of Your Sunshine Vapor will play during the day at 1 p.m. The Stools, the Idiot Kids, Troy Gregory, and Brother Son will perform later in the evening, starting at 8 p.m.

Records will participate in the Record Store Day festivities with local DJs, food, and sales on and used stock, but will sit out on the RSD 2018 exclusives.

It’s shaping up to be quite a big day for this Eastpointe record shop. Melodies & Memories recently celebrated 30 years in business and are going big for RSD 2018. They recently had one of the rarest 7-inch records in the world purchased from Jack White. A re-press of Frank Wilson’s “Do I Love You (Indeed I Do)” will be manufactured by White’s Third Man Records and will be released exclusively at Melodies & Memories and Third Man Cass Corridor.

“This will be the largest and deepest Record Store Day inventory we’ve ever had,” says Melodies & Memories co-owner Denise Zieja.

Performances from Jimi Hendrix’s mentor Billy Davis and giveaways of White Stripes records signed by White are also on the docket.

This Hamtramck haven for old-school vinyl will focus on their stock of , ’60s, ’70s, and ’80s records and forego the RSD 2018 exclusives. Customers will enjoy a 20 percent off sale.

Solo Records Facebook
New and vintage vinyl will be in stock at Solo Records on RSD 2018.

This Oak Park shop wants to be “the early morning destination” for Record Store Day customers, according to manager Aaron Anderson. Street Corner will have cookies from Sugar Kisses Bakery and coffee on deck for early risers, plus an 8 a.m. performance from Billy Davis for the crowd waiting in line.

“We’ve ordered well over 400 releases and over 300 are Record Store Day exclusives,” Anderson says. “We do it pretty big here.”

Anderson is excited for exclusive releases from Davis, Melvin Sparks, and the MC5. He acknowledges how much Record Store Day has grown in his store, as well as around the world.

“We’ve been doing it since the first [Record Store Day] 11 years ago,” Anderson says. “The first year we only got five RSD releases.” 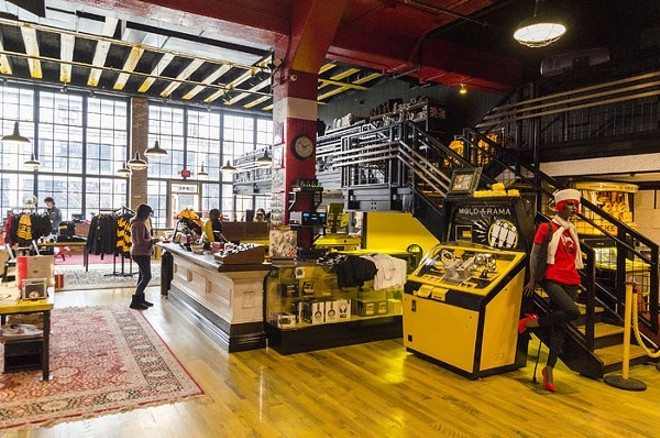 Motor City Juke Joint will be filming a live podcast from 8 a.m. to 1 p.m. at this east side vinyl spot. All used items will be 21 percent off and live performances from , , Blurred Opinions, Carrie , and Ian Bensman are scheduled. Record Store Day exclusives will also be in stock.

Last month, Two Jerks Records’ experienced a major flood in their store, forcing them to move their Record Store Day operations to a new venue. Two Jerks will now host their RSD 2018 event at Ollie’s Food and Spirits three doors down at 42 E. Cross St. in Ypsilanti. Record sales will take place from 9 a.m. to 5 p.m. with a Dogfish Head Brewery tap takeover planned afterward. 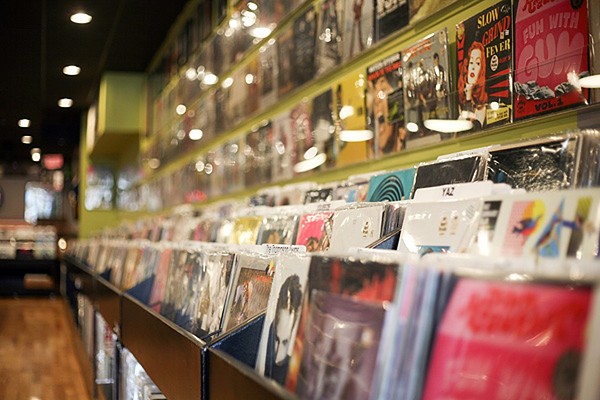 MT File
UHF Records in Royal Oak will have RSD 2018 releases in stock.

Store manager Scott Hagen is prepping for this Royal Oak record store’s biggest day of the year. They’ll be stocked up with Record Store Day exclusives, will hold contests and giveaways for customers, and will be bringing up hidden inventory from their basement storage up for purchase. "Every year for the last eight years we’ve had thousands of people,” Hagen says. “It’s absolutely our biggest day of the year... bigger than Black Friday and the holiday season." Hagen is betting on some of this year’s classic rock RSD exclusives to sell the most. “Pink Floyd’s The Piper at the Gates of Dawn in mono is going to be popular along with the David Bowie and Tom Waits reissues,” Hagen says. “Those are what people have been requesting the most.” No live entertainment is scheduled this year so the UHF staff can focus on the best possible shopping experience for customers.

Get to this Ann Arbor shop early if you’re looking for RSD exclusives — they do not offer holds on records and sales are first , first served. Exclusive releases are limited to one per person.

This newer Warren record store will celebrate their one-year anniversary in conjunction with Record Store Day. Free snacks and giveaways are planned, as well as Record Store Day exclusive releases.

Weirdsville will reward early bird customers with free coffee, donuts, and Record Store Day promo bags for the first 15 people in line. All used vinyl, CDs, cassettes, and DVDs will be marked down by 20 percent. Live performances by Those Hounds, Emily Rose, Bogart, and Friends of Dennis Wilson are scheduled throughout the day.


Anthony Spak is an editorial intern with the Metro Times and a recent graduate of Oakland University’s journalism program.

Get our top picks for the best events in Detroit every Thursday morning. Sign up for our events newsletter.
© 2022 Detroit Metro Times