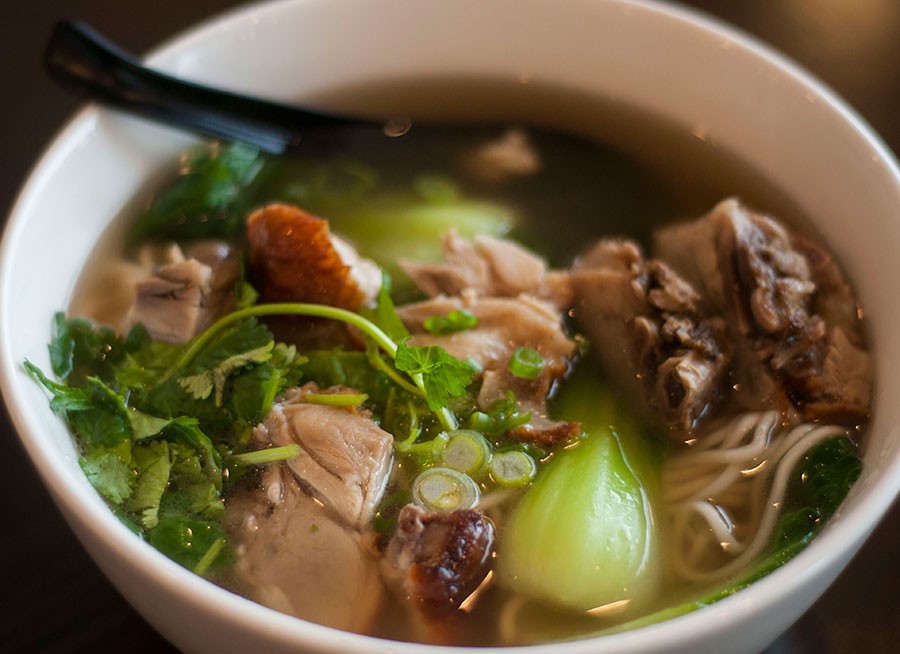 It's no secret that John R and Dequindre roads in Madison Heights are some of the best stretches for eating in metro Detroit. The sea of strip malls that comprise the suburb are stocked with excellent Vietnamese, Thai, and Chinese restaurants, where you can go for everything from bahn gio to squirrel-shaped fish.

And, man, Madison Heights just keeps getting better, even if the deserving restaurants here will never get the consistent media attention that those in downtown Detroit or hipper suburbs receive. Exhibit A includes two new Chinese noodle spots, Noodletopia — which Metro Times recently visited — and Kung Fu Noodle House. What sets apart their bowls is that they make and hand-stretch their own noodles in house, thus the fresh noodles take center stage. But it's a crowded stage, as much of what you'll eat here is busy with flavor.

The seafood noodle bowl is Kung Fu's banger, with a relatively subtle-but-deep broth flavored by ginger, soy, and garlic. It's stocked with plenty of mussels, whole shrimp, scallops, and bok choy, and is so good that I'll even give it a pass for using imitation crab meat sticks (the hot dog of the sea). Kung Fu fills the bowl with wheat flour noodles — mien — that are around 10 inches and slightly doughy.

The Taiwanese beef noodle soup and the spicy beef brisket noodle soup are solid, if not quite stand-and-point delicious. Kung Fu stocks its Taiwanese bowl with well-marbled hunks of beef and a broth spiked with chilis, garlic, chili bean sauce, ginger, bok choy, and mien. The spicy beef brisket is similar but with shredded beef and fat, and is made a little more electric with a heavy dose of Sichuan peppercorns.

For those who like Peking duck, the roast duck noodle is a good starting point. It arrives with pieces of roasted duck bobbing in a deep, salty, warm broth. Though the broth in the fried pork chop noodle bowl was a little mild and thin for my liking, the breaded pork chop that's served on the side with some barbecue sauce makes it a worthwhile dish if a Chinese schnitzel is your thing.

Kung Fu's red curry vermicelli soup is a take on a Thai dish and filled with large hunks of fried chicken, cauliflower, greens, and a generous portion of clear, chewy mung bean noodles — or cellophane noodles. The broth is also slightly thick and bites a bit, and, like most other soups here, it reached a certain threshold.

Kung Fu also offers a line of barbecue skewers that's a different game from what you'll find in some of the nearby Chinese barbecue houses. Each option arrives with the same rub, which is salty, slightly sweet, and radiates a bit of heat. It's uniformly applied to all options, which is a good or bad thing, depending on how you feel about the seasoning. We tried the beef, chicken, lamb, fish tofu, shrimp, mini sausage, and whole quail sticks. Of those, the standouts were the shrimp, which arrives with a skewer through two whole large orange crustaceans; the fish tofu, which is something like a different version of the aforementioned sea hot dogs; and the mini sausages, which will remind you of cocktail sausage. Though it was good, it would be nice to see different spices applied to the different vessels. Surely there's something in the spice rack that works better with quail than sausage, and vice versa.

Of Kung Fu's appetizers, the salted crispy chicken is a pass as it arrived with too much thick breading that hides the bird. The cold sesame seaweed salad isn't what you're expecting if you order similar dishes at local sushi restaurants — these are long, noodle-like strands of seaweed in which you can still taste the sea. The best option is the spicy cold chicken which comes submerged in a mean-looking, gravely, crunchy mix of scarlet chili oil, chili peppers, mouth numbing Sichuan peppercorns, garlic, and green onions. That mixture flavors hunks of light and dark meat roasted chicken, and it offers some of Kung Fu's best bites.

As for the ambiance, expect a straightforward, clean room with about 50 seats that nearly fills up during peak hours — and the service is always excellent. Since two restaurants trading in very similar cuisine opened around the same time just down the street from one another, the question that one hears in conversation is, "To which of Madison Heights' Chinese noodlemakers do you pledge allegiance?" It's tough to argue with Noodletopia's repertoire, noodles, and approach, but the seafood bowl at Kung Fu can hang with just about any plate in metro Detroit. Perhaps this town is big enough for the both of them, and it's likely that there's more to come.