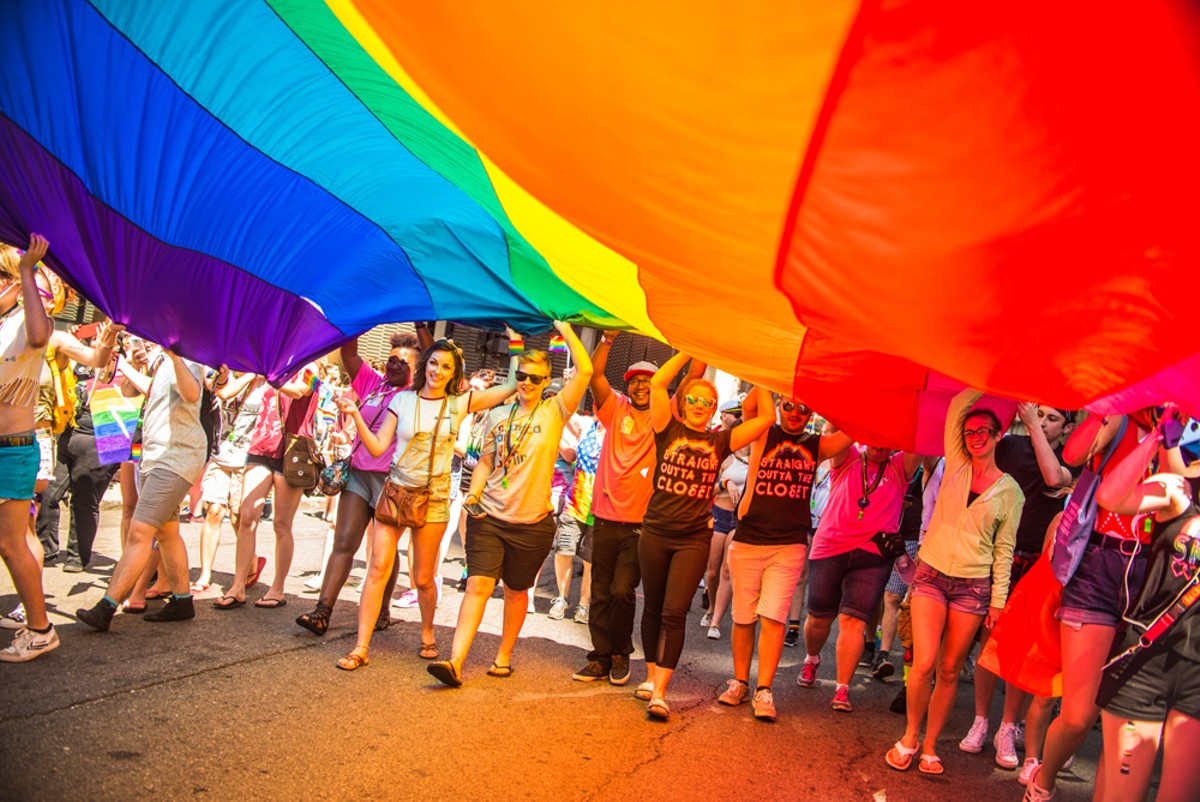 Summer in metro Detroit means one thing: festival season. More specifically, though, pride festival season, and to that we say, "Oh, hell yaaaaasssss!"

This year's pride festivities, however, happen to fall upon a very important anniversary.

On June 28, 1969, police violently raided the Stonewall Inn — a gay bar in New York City's Greenwich Village. The arrests ignited six days of national protests and from the fearless queer rebellion, an empowered movement to further equality, education, and protections for members of the LGBTQ+ community and its allies, was born.

While many of this year's pride events will pay tribute to the 50th anniversary of the Stonewall uprising, each of these prismatic street fairs, parades, dance parties, and quiet moments of reflection act as testaments to the progress we've made and all the work left to do. At its core, Pride is a movement. So, get moving! Put on your dancing shoes, throw on some leather and/or glitter and shine bright like the diamond you are.

For the ninth year in a row, fabulous Ferndale will kick off the summer season with a celebration of our LGBTQ+ brothers, sisters, and non-binary buds. Hundreds of vendors, as well as participating businesses along the main drag, will raise their rainbow flags in solidarity while the festival's thousands of expected attendees throughout the will shop, dance, and celebrate the many facets of the incredible queer journey. Per usual, a 5k Rainbow Run will get the event started bright and early at 8 a.m. followed by pride weddings, which will commence at the Rust Belt Market (formally the main stage.) This year, Las Vegas singer-songwriter Shamir will lead the music lineup, along with local queer pop performer Siena Liggins. This year will also host a youth prom for folks between the ages of 13-20 as well as a drag queen story hour, queerified version of Go Comedy's All-Star Showdown, as well as wellness planning opportunities (HIV/STI testing), which returns as a cornerstone of Ferndale Pride's ongoing activism.

Event begins at 12:30 p.m. on Saturday, June 1; downtown Ferndale; ferndalepride.com; Event is free and open to the public.

Blowouts aren't just for your hair, hunny. Motor City Pride fest is big, bold, and as gay as it gets. Thousands will gather and sashay for this two-day, family-friendly celebration along the riverfront, which kicks off on Saturday, June 8 and includes a moment of remembrance for victims of LGBTQ+ violence at 3 p.m. Over 100 vendors will be present while 50 performers are slated to take to the festival's four stages including Lipstick Jodi, Mae James and the Fort Union, DJ's TYLR_, Holographic, and Nadar, as well as headliners Greyson Chance, Flint activist and artist Tunde Olaniran, and Sabin's Drag Revue featuring RuPaul's Ongina. Sunday will see the event's annual pride parade, which launches at noon at the corner of Fort Street and Griswold Street.

Event begins at 1 p.m. on Saturday, June 8 and noon on Sunday, June 9; Hart Plaza, Detroit; motorcitypride.org. Admission is $5 and free for 12 years and under.

Let's get political, political. The Michigan Pride March returns to honor the many statewide pride events with an all-ages parade, rally, and festival. The parade steps off on Saturday, June 15 starting at noon in front of Adado Riverfront Park, followed by a rally on the lawn of the State Capitol building, and at 1 p.m. the festival begins in Old Town with entertainment, vendors offering up art, goods, health and wellness testing, as well as food and beverage tents.

What started out with just 150 attendees its first year has grown to attract thousands. Returning for its ninth year is the Flint Pride Festival, which will once again twirl through Flint's Riverbank Park for a family-friendly afternoon of music, entertainment, food, and activism aimed to increase visibility throughout the community.

June is pride month. But in Detroit, July is considered Black gay pride month, and for more than 20 years, Hotter Than July has celebrated Detroit's Black gay community. The weeklong event features a variety of programming, both free and ticketed, including a candlelight vigil, an informational summit at the Marvin Lee Social Justice Center, and a blowout picnic at Palmer Park. This year's event boasts a Kings and Queens theme and among the HTJ's newest additions, a LGBTQ Community Career Fair hosted by the Detroit Police Department in Palmer Park on Saturday, July 27.

Event begins Tuesday, July 23 and runs through Sunday, July 27 at various locations; lgbtdetroit.org/hotterthanjuly. Some events are free and open to the public; others are ticketed and/or require registration.

Originally touted as OUTfest, Ann Arbor Pride turns 25 years queer this year as AA's inclusive LGBTQ+ weekend-long event. Once again, this year's festival is hosted by Washtenaw County's Jim Toy Community Center — a longstanding resource center that provides info, education, and advocacy for the LGBTQ+ community and its allies. This year, AA Pride will expand its main stage programming, vendor blueprint, and will welcome the return of the beer and wine garden, poetry slams, yoga, a kid zone, as well as burlesque and drag performances. While we await the lineup for this year's festivities, relish in the fact that rapper and national sex-positive icon cupcakKe headlined the Necto Pride pre-party so we suggest you strap in, or on, for what's to come this year.

Event begins at 10 a.m. on Saturday, Aug. 3 through Aug. 4; Downtown Ann Arbor, annarborpride.com. Event is free and open to the public.

« Livonia now has a pet funeral home   |   Detroit City FC is going pro, whether American soccer wants it or not »