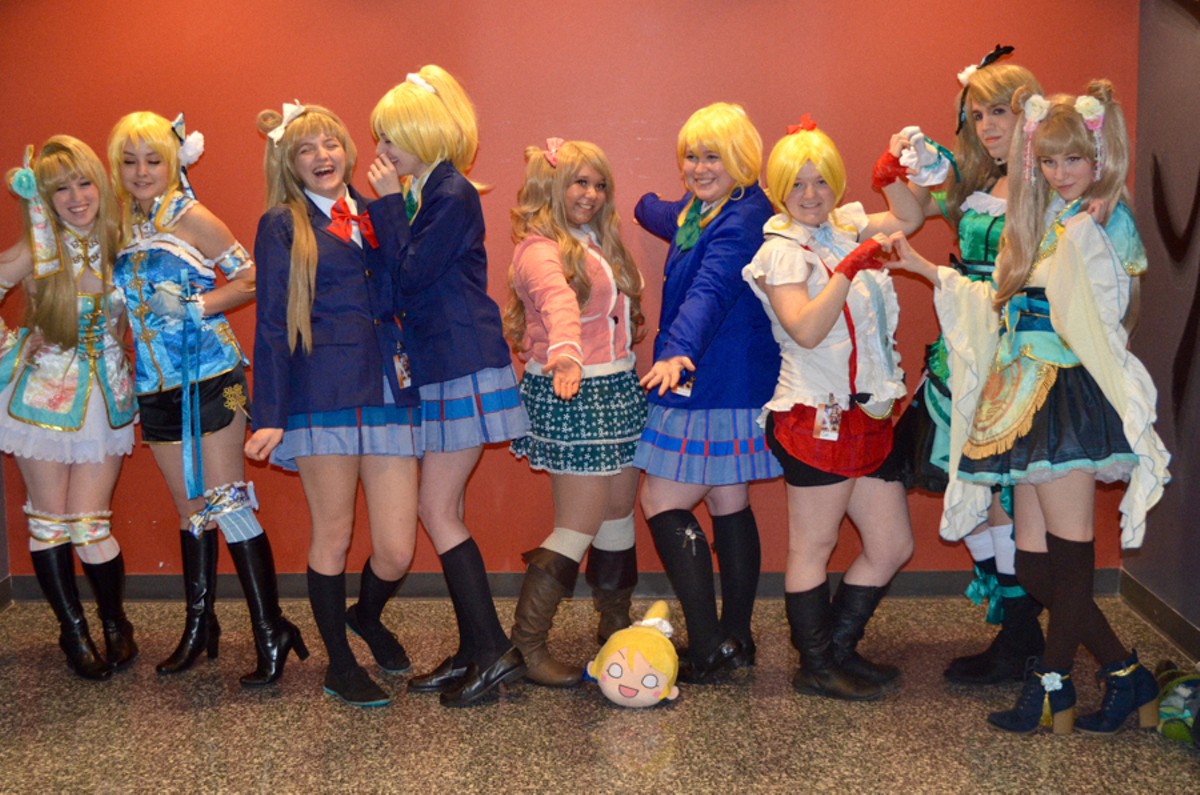 
Kinka Snow and Patricia Simpson Exhibit
@ Lawrence Street Gallery
Kinka (Karen) Snow creates from her heart. Her paintings are abstract pieces of the puzzle that is discovering your personal identity. At the Lawrence Street Gallery, Snow's work, along with the work of Patricia Simpson's, will be displayed together in an exhibit for most of November. Simpson spent three decades as a teacher, but never let her passion for art fall to the wayside. Her work is a focused blend of Asian, Australian, and African culture, and she uses a variety of mediums to create her unique pieces.
The gallery opens at noon; 22620 Woodward Ave., Ferndale; lawrencestreetgallery.com; All exhibits are free.


Youmacon
@ Cobo Center & Detroit Marriott at the Renaissance Center
Gear up in your best cosplay and get some tickets for the 12th annual Youmacon — a Comic-Con style event devoted to Japanese pop culture, especially anime and video games. Special guests will include Cristina Vee (Netflix’s Knights of Sidonia, Madoka Magica), Lisa Ortiz (Street Fighter V, Yu-Gi-Oh), Chris Rager (Dragon Ball Z, Full Metal Alchemist, and many more). It’s going to be a fantastic four days, filled with plenty of panels and workshops that’ll definitely appeal to all guests. You definitely don’t want to miss out on the “Live Action Mario Party!”
The event starts at 5 p.m. on Nov. 3.; Cobo Center is located at 1 Washington Blvd., Detroit. Detroit Marriott is located at 400 Renaissance Center, Detroit; youmacon.com; Event passes are $65.


Ray and Laura's Comedy Showcase
@ Small's
Get ready for a night of laughing your buns off. This time around the monthly comedy showcase, hosted by the very funny Laura Witowski and Ray Hollifield, will feature Los Angeles native Zachary Stein, plus Ray and Laura favorites Jeff Horste and Esther Nevarez, and newcomers Victoria Manthei Mansberger and Brennan Schoen from Kalamazoo. It'll be a night that everyone can enjoy.
Doors open at 8:30 p.m.; 10339 Conant St., Hamtramck; smallsbardetroit.com Tickets are $5.


The Crucible
@ Cranbrook Theatre
In 1953, the Rosenbergs were executed and Arthur Miller's The Crucible was the Hamilton of the year. Everyone wanted to see it. It was, and is, sensationally deep. An allegory for the United States' paranoia about communists infiltrating the U.S. disguised as just a well-written play about the Salem witch trials, this commentary on the danger that witch hunts pose to freedom sadly remains relevant. The Crucible will make you think. It is a must-see for theater lovers, history lovers, commies, and 'muricans.
The shows start at 7:30 p.m.; 550 Lone Pine Rd., Bloomfield Hills; blogs.cranbrook.edu/theatre; Tickets are $8-$10.


Morris Day & the Time
@ Soundboard at Motor City Casino
Get ready to get funky with Morris Day and the Time’s super tight brand of R&B, which is sure to make you want to put on your dancing shoes. The group, which was notoriously featured in Purple Rain and has toured with Prince, first came on the scene like a tidal wave in 1981. They have since had gold and platinum-selling albums. If you missed them when they came here in 2013, here’s your shot at redemption. Go see them now. It’s what Prince would want.
The show starts at 8 p.m.; 2901 Grand River Ave., Detroit; ticketmaster.com; tickets are $35-$45.


Tribute to Moondog
@ Trinosophes
Composer Frank Pahl has put together this set of classic pieces by the legendary composer Louis Hardin aka Moondog in honor of his birthday. The combos Scavenger Quartet will perform, as well as the Lovely and the Wretched. Blind for most of his life, Moondog was first known as a New York street person, “the Viking of 6th Ave.” New York Philharmonic conductor Artur Rodziski was an early fan of his idiosyncratic, repetitive work. That resulted in Moondog being recorded as early as 1953, making him one of the original architects of minimalist music. This will be awesome.
Doors at 8 p.m.; 1464 Gratiot Ave., Detroit; trinosophes.com; $8.


Well Done Goods Grand Opening
@ Well Done Goods
This is going to be your favorite holiday shopping stop. Well Done Goods by Cyberoptix (yes, they used to be just ties, but they’ve branched out!) will feature all sorts of handmade goods. There’s going to be plenty of women’s clothing and accessories as well as men’s. There will also be a bunch of barware and vintage oddities for you to blow your money on. Also, this grand opening is going to be a pretty rad party.
The event starts at 6 p.m.; 1440 Gratiot Ave., Detroit; facebook.com/welldonegoods; free.


Hedwig and the Angry Inch
@ The Michigan Theater
So, this isn't just your run-of-the-mill Hedwig and the Angry Inch screening, which would honestly be awesome enough. This is a special Get Out the Vote screening featuring a live commentary from John Cameron Mitchell aka the first Hedwig, and the film/musical's writer and director. The film is the story of Hedwig, the victim of a botched sex-change operation who is also genderqueer rock star. She's a German immigrant trapped in Kansas, who eventually finds love and acceptance in this film version of the Tony Award-winning punk rock musical.


DJ Butter
@ PJ’s Lager House
This early event is a free listening party for DJ Butter’s new album The Art of Rock Climbing. DJ Butter has been at the center of Detroit hip-hop for the last 20 years. He’s worked with Eminem, D12, Miz Korona, and many more. He’s an integral piece of Detroit hip-hop’s fabric, and he’s released more than 250 mixtapes in his career. Definitely one of the most talented DJs to come out of Detroit, he, Boldy James, and Kokane are going to be one hell of a group to see.
Doors at 4 p.m.; 1254 Michigan Ave., Detroit.; pjslagerhouse.com; The event is free.


Jo Serrapere
@ The Ark
There’s so many record release parties this time of year; these are always the most fun events! Jo Serrapere and the LaFawndas invite you to celebrate the release of their new album, Dollar Store Nation, on the Michigan-based Earthwork Music Label. Detroit Music Award-winner Serrapere is an independent American roots musician (Americana, garage rock, alt-country, folk, swing, blues) and clinical psychologist from Dearborn. She has performed twice on A Prairie Home Companion, so you know this is the real deal. Jo has put together a new group that includes two members of the sorely missed Stella. The new tunes are socially critical, with a lot of humor to help it go down easy.
Doors at 8 p.m.; 316 S. Main St., Ann Arbor; 734-761-181; $20.


Sheryl Underwood: Bullying is No Joke Fundraiser
@ Music Hall
Talk-show host and comedian Sheryl Underwood is bringing her award-winning stand-up to Detroit. You know her from frequent appearances on Def Comedy Jam in 1992; her radio show, The Sheryl Underwood Show (which is featured on Jamie Foxx's SiriusXM radio station); and a host on the daytime talk show, The Talk (it's a clever name). She joined The Talk in 2011, replacing Leah Remini (King of Queens). This fundraiser performance is going to be a hoot, and Underwood will be joined by fellow comedians Red Grant, Dominique Hourani, and Guy Torry. Proceeds go to Defeat the Label, an international nonprofit. Go have a laugh this week and feel good about doing it.
The show starts at 8 p.m.; 350 Madison Ave., Detroit; musichall.org; Tickets are $50-$70.


Handgrenades Tunnels Release Party
@The Loving Touch
One of Detroit’s most killer alt-rock bands since their formation in 2008, and arguably the best alternative band from Downriver since Sponge, Handgrenades has a reputation for performing great shows. The band’s highly anticipated fourth album, Tunnels, has a Nov. 4 release date, and the first single “Daily Routine” will please both ex-emo kids and alt-hipster fans alike. If you haven’t heard anything from their three previous albums (Easier, The Morning After, Three Cheers for The Wonder Years), then just imagine Arctic Monkeys, but less groovy and more dance-y. They definitely have a very indie, hi-fi feel about them, but it’s all energized, and their melodies are almost Monkees-esque thanks to the satisfyingly catchy nature of their refrains. Handgrenades can even sound, occasionally, like early R.E.M. circa Reckoning. The release party at the Loving Touch is going to be a pretty rad time, and their tour will start on Nov. 17.


An Evening with Booker T. Jones
@ El Club
He’s blues, he’s rock ‘n’ roll, he’s R&B, he’s soul. He’s Booker T. Jones, and he’s behind many of your favorite acts from the 1960s to the present. He’s worked with Bill Withers, Neil Young, Willie Nelson, and even Rancid. Since he started out as a rock in Memphis, Tennessee, at the age of 18, he’s been a darling of fans and critics alike. From his time as a solo artist and producer to his three spans with Booker T & the M.G.’s (who he is playing with presently), Jones has acquired a fervent fan base, and along his career’s strange and diverse path, he’s earned four Grammy Awards, along with a Grammy for Lifetime Achievement. A night to see this legend in action will be an indispensable chance for pretty much anyone who has ever liked music.
The show starts at 8 p.m.; 4114 W. Vernor Hwy., Detroit.; elclubdetroit.com; Tickets are $50.


Hiss Golden Messenger
@The Loving Touch
Indie folk/alternative country band Hiss Golden Messenger, led by M.C. Taylor (formerly of hardcore band Ex-Ignota and indie rock band the Court & Spark), will perform their Byrd-like tracks from their 2015 release, Heart Like a Levee. The group, which, in addition to the Byrds, cites Buffalo Springfield and the Beatles as their main influences, captivates fans with Taylor’s incredibly personal lyrics on love, self, and the open road. Hiss Golden Messenger’s multifaceted swamp-pop sure is something you’ll want to see.
The show starts at 8 p.m.; 22634 Woodward Ave., Ferndale; thelovingtouchferndale.com; Tickets are $12.


GusGus
@ The Magic Bag
Iceland may have provided the antagonists of Emilio Estevez’s finest film D2: The Mighty Ducks, but for electronica, they’ve provided some of the best groups of the genre. With that said, GusGus, legends of electronics since 1996 and natives of Iceland, will be here soon to promote their latest release, Mexico. The group also plans to release an album before 2016 expires, so there’s also the chance that you’ll hear some even newer material as well. So, come on out, trip-hop and house fans. This one is for you.
The show starts at 8 p.m.; 22920 Woodward Ave., Ferndale; themagicbag.com; Tickets are $15.