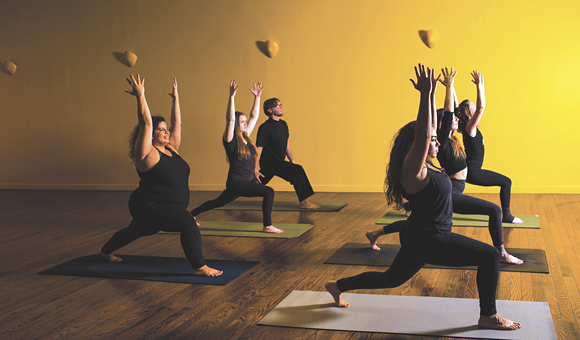 Yoga is a niche workout that never seems to go out of style. Whereas cardio drumming was cool for a season or two, yoga's remained a powerful way to exercise one's mind and body for centuries. The practice has evolved little throughout the years, yet people still feel drawn to the spiritual and physical toil that comes along with pushing our mortal being to its limits. Metro Detroit is rife with studios that practice yoga in all different manners, giving both experienced and novice yogis plenty of intriguing options.

With locations in Royal Oak, Birmingham, Grosse Pointe, Southfield, and West Bloomfield, Yoga Shelter is accessible to just about anyone who lives in a northern suburb. A membership is a tad expensive, but newbies are afforded a $29 30-day trial, plus they often run deals on Groupon. Those bargains will get you in the door, but the studio's atmosphere will keep you coming. Instructors create their own flows and construct playlists around them usings modern music. Full disclosure, we've practiced at this studio and been generally impressed, especially the time a singalong to Whitney Houston's "Your Love in My Love" erupted during pigeon pose.

Inyegar is the kind of yoga that is alignment-based and employs straps, wooden blocks, and other accessories (all of which are provided by the studio) to ensure the body can achieve the correct posture. Visitors to this Hamtramck studio welcomes all bodies, all abilities, all sizes, and those in wheelchairs. You can purchase a five-class trial membership for $30, but a month-long membership will cost you $95 plus a $100 yearly membership fee.

This studio (which also has a location in Detroit and promises to open a studio in Bloomfield Hills soon) is your basic, straightforward yoga studio. They're form-focused and they offer the usual types of classes like a slow flow for beginners and a vinyasa class for those a little better versed in their practice. Unlike other studios around here, they offer a kids yoga class ($40) as well as a free first class to all new students. Even better, they offer two free community class every Sunday, one at 4 p.m. and one at 7 p.m. Otherwise prices are a little higher here, $115 per month.

Detroit Yoga Lab provides a modern and unique experience that is as inclusive as it is unique, although it's usually not during the world's best techno festival. They offer a full schedule of classes including the usual slow flow and vinyasa as well as infrared hot yoga and a candlelit slow flow. They offer a month-long trial period of unlimited classes for $45 and an unlimited monthly auto pay program at $99 a month. Last year Detroit Yoga Lab hosted a special outdoor yoga class at Movement Electronic Music Festival in Hart Plaza and we have to say that we were particularly inspired by not only the coolness that was having a DJ provide fresh vibes for our practice on a grassy knoll in the middle of Detroit, but also by our beautiful lady instructor and her pit hair.

Bikram yoga is a fancy way of saying it’s going to be really, really hot in the room. The practice involves cranking up the furnace to ensure everyone is sweating at the maximum sweat potential and coming very close to fainting. And that sentence was only slightly hyperbolic. Anyway, this Midtown studio is the only one of its kind in Detroit proper, although you’ll find similar studios in the suburbs. We suggest bringing a couple hand towels to sop up the sweat and you might want to keep the eyeliner light — otherwise you’ll leave the studio looking like Alice Cooper. (Hey, we’re speaking from experience here.) Pricing here is similar to other studios ($99 for an auto pay contract) and they offer a $45 30-day trial.

Upon hearing the foundation of Rochester Hills’ Intentional Yoga is a one hour and 20 minute-long practice in 103 degree heat, you might look elsewhere to fulfill your yogic desires. But, you’d be remiss to let the likes of such a practice turn you away from this studio. Let us offer another solution — how about a 60-minute slow flow class or a heat-free yin yoga class that will allow you to center your mind, body, and spirit? See, there’s something for everyone here. Classes are a teensy bit cheaper here than at similar studios — a three-month package will run you $267, which breaks down to $89 a month.

Born out our Yoga Shelter, this studio is new to metro Detroit’s blossoming yoga studio scene. It’s run by a former Yoga Shelter instructor, so you can expect a somewhat similar vibe in that instructors use modern music to invigorate the practice and give it a more modern vibe. Owner and yogi Caren Paskel welcome yoga practitioners to join her tribe, and at a decent price too. New patrons get their first month for $39, a 10 class per month package is $89 and an unlimited month-long package is $99.

Funny enough, this yoga studio isn’t in Detroit. It’s in Royal Oak. Instructor Jason Schramm specializes in Ashtanga (using blocks and ropes to get into the perfect alignment) and vinyasa (moving in a sequence and focusing on the breath) yoga practices and he hopes his practices will give his students a sense of wellbeing and positive change that will carry through to the rest of their lives. That’s a noble pursuit. You can purchase a monthly membership for $99.

This downriver studio is a little bit different than the rest of this list, mostly because it’s a nonprofit that welcomes everyone to practice, despite their physical or financial limitations. All classes are drop-in only and you’re only required to pay what you can afford. They offer hot yoga, restorative yoga, slow flow, vinyasa, and a candlelit yin yoga, plus a Saturday morning class for kids. If you’re looking to break into yoga, this a great place to start — you can’t beat the price.

With a packed daily schedule and a focus on putting their patrons on a path toward peace, Sattva Yoga stands out in a crowd of yoga studios not only in Dearborn but across metro Detroit. On Monday, Wednesday, and Friday they hold an early morning self practice hour, followed by classes that welcome yogis of all levels to pose, stretch, and breathe together. New students can purchase a month’s worth of classes for $77, after the package costs $95.

New to Wyandotte’s little downtown district, this studio specializes in hot yoga and focuses on creating a fun and uplifting environment. You’ll find their schedule full of slow flow and vinyasa classes, but they also offer tai chi every Tuesday and Saturday, plus various workshops and trunk shows. The second-story studio is perched over the city’s iconic Stroh’s Ice Cream shop, so, you know, once you’ve finished you can get some strawberry cheesecake scooped into a waffle cone and not feel too bad about it. New students can sign up for a $33 30-day trial and after that monthly packages start at $88.

This one is something of an honorable mention, because Om at the Max only happens once every few months, but it’s worth noting because it’s a unique experience that you won’t find at a studio. It’s held inside the Cube at Orchestra Hall and the accompaniment is provided by an orchestral group or string quartet and the whole thing is taught by yoga pro/orchestra librarian Ethan Allen. It’s $25 a class, but they’ll pass out discount vouchers for upcoming classes at the end of your practice.

« These metro Detroit ice cream places will satisfy any craving   |   Down to get down? These five Detroit clubs are highly recommended »