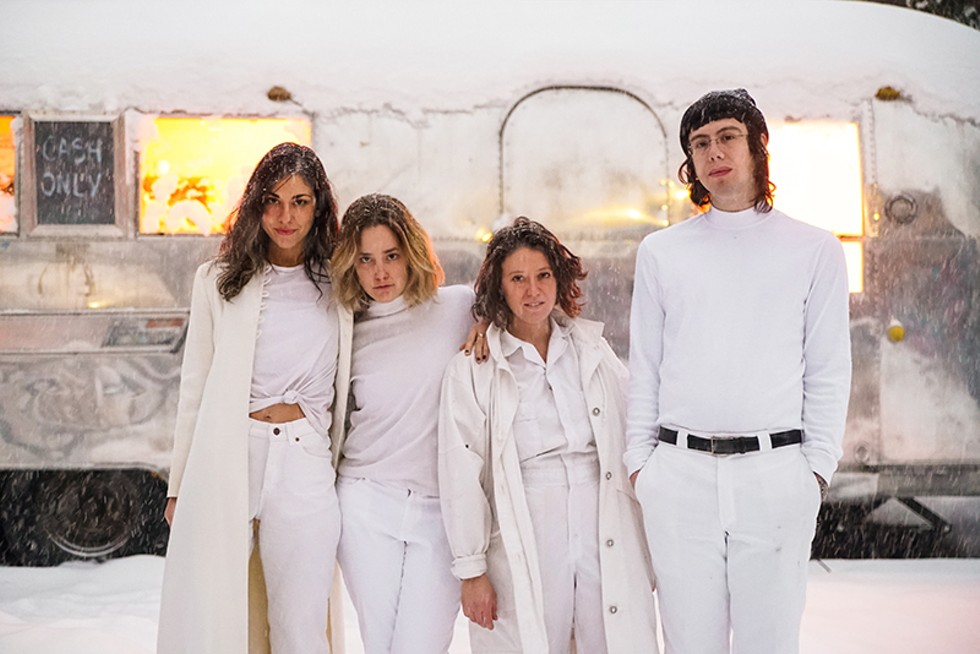 There are few band names that seem more "Detroit" than Double Winter. Appropriately, our interview was conducted in the back of El Club on the first major snowstorm of the year, with the band dressed in all white.

The four piece avant-garde rock band — made up of metro-Detroiters Holly Johnson (vocals and bass), Morgan McPeak (drums), Augusta Morrison (electric violin), and Vittorio Vettraino (guitar) — say they plan to follow their well-received 2016 EP, Watching Eye, with a two-song 7-inch and full-length record in the new year, drawing from some of their favorite genres like doo-wop, Motown, funk, and psychedelic rock.

After playing together for almost four years, the band members say they feel like they are finally finding their stride. "We're coming into our own as songwriters more," says Vettraino. "When we sit down to write new stuff, we take our time with it and every single part is there for a reason."

The 7-inch, entitled Friends With Bad Ideas, showcases the band's energetic crowd-pleasers "Fall on Your Face" and "Oxen's Eye." "When we play live, there are the songs where we notice people starting to nod along," says Johnson. While the songs are undeniably catchy, Johnson explains there's more to them than a memorable hook and reason to headbang.

"The 'Oxen's Eye' is actually a symbol for the masculine gaze that many people have to deal with on a daily basis," says Johnson. "It's having to do with dismantling that... and confronting an uncomfortable situation."

As a band containing three amazing female musicians, it's not surprising that they look to artists like Nots, the Raincoats, Patti Smith, and the Breeders for inspiration. As a frontwoman, Johnson's vocals fluctuate between haunting and apathetic, paring gracefully with the other instrumentation. The band's ability to meld each other's musical preferences and playing styles introduces a much-needed fresh perspective to the indie-sphere.