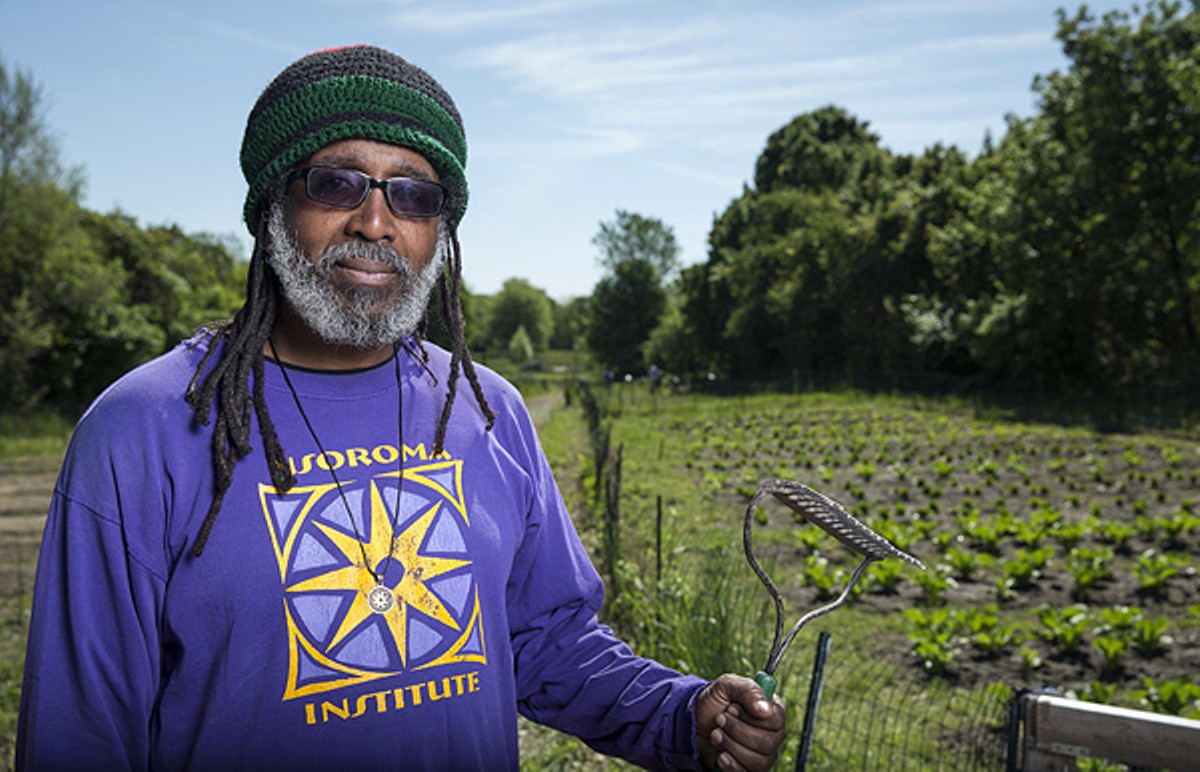 As Malik Yakini will tell you, many describe him as a "food activist," but his work as executive director and co-founder of the nonprofit Detroit Black Community Food Security Network should be viewed in a larger context.

"What motivates me first of all is a desire to see greater self-reliance and self-sufficiently in the African-American community," he says. "I'm concerned on a much larger scale of African-Americans generally. One of the places that's most logical to start is food."

The 59-year-old is a well-spoken, fluid orator. Yakini says the nonprofit's food work is situated within that larger context. "It's not isolated from the other struggles, for example, of police murders and police brutality; it's not isolated for the struggles from improved education, poverty. I definitely see it being interconnected with all of those things, which I think is significant," he says.

One example of his point is the economic potential of food production. As Yakini points out, "People say the food economy is the first economy of any society. Regardless of what anyone's economic standing is, they have to eat."

Focusing on locally grown food can allow local communities to be more self-reliant and allow it to "at least capture a certain percentage of that dollar that's spent on food," he says. In turn, that could be a "great economic driver" in Detroit and African-American communities.

"As we look into how to revive Detroit," he says, "I think food can play a great part in that."

A lifelong Detroiter — "I've lived in the same house since 1960" — Yakini has seen the twists and turns the city has endured over time. While the national dialogue on Detroit has shifted to a more optimistic, upbeat tone, Yakini says he's ultimately concerned about the continued emergence of Two Detroits.

"We have downtown, Midtown, Corktown, East English Village, which seem to be highly resourced, lots of capital being poured into them, and new mostly white residents," he says. "The rest of the city, as far as I can see, continues to languish.

"I think that some very dangerous precedents are being set with the purchasing of large tracts of land and of multiple buildings by a few wealthy white men. And so it looks like what's being set in place will define Detroit for the next 50 to 100 years, and it seems like the same disparities are based on race and income, and will continue to exist."

Elected officials in Detroit should have the foresight to redevelop the city "in a way that minimizes those disparities, that creates equity for all members, all residents of the city," he says.

Yakini, who's also an avid musician, says at his age, he's beginning to grapple with his place as an elder in the community, especially as those issue take center stage in the remaking of the city.

"One of the things that I'm realizing is part of my role is to sum up the many experiences I've had as an activist," he says, "and convey those to younger people to make meaning of those experiences."

Ryan Felton was born in 1990 and spent the majority of his childhood growing up in Livonia. In 2009, after a short stint at Eastern Michigan University, he moved to Detroit where he has remained ever since. After graduating from Wayne State University’s journalism program, he went on to work as a staff writer...
More
Scroll to read more The People Issue articles
Join the Metro Times Press Club