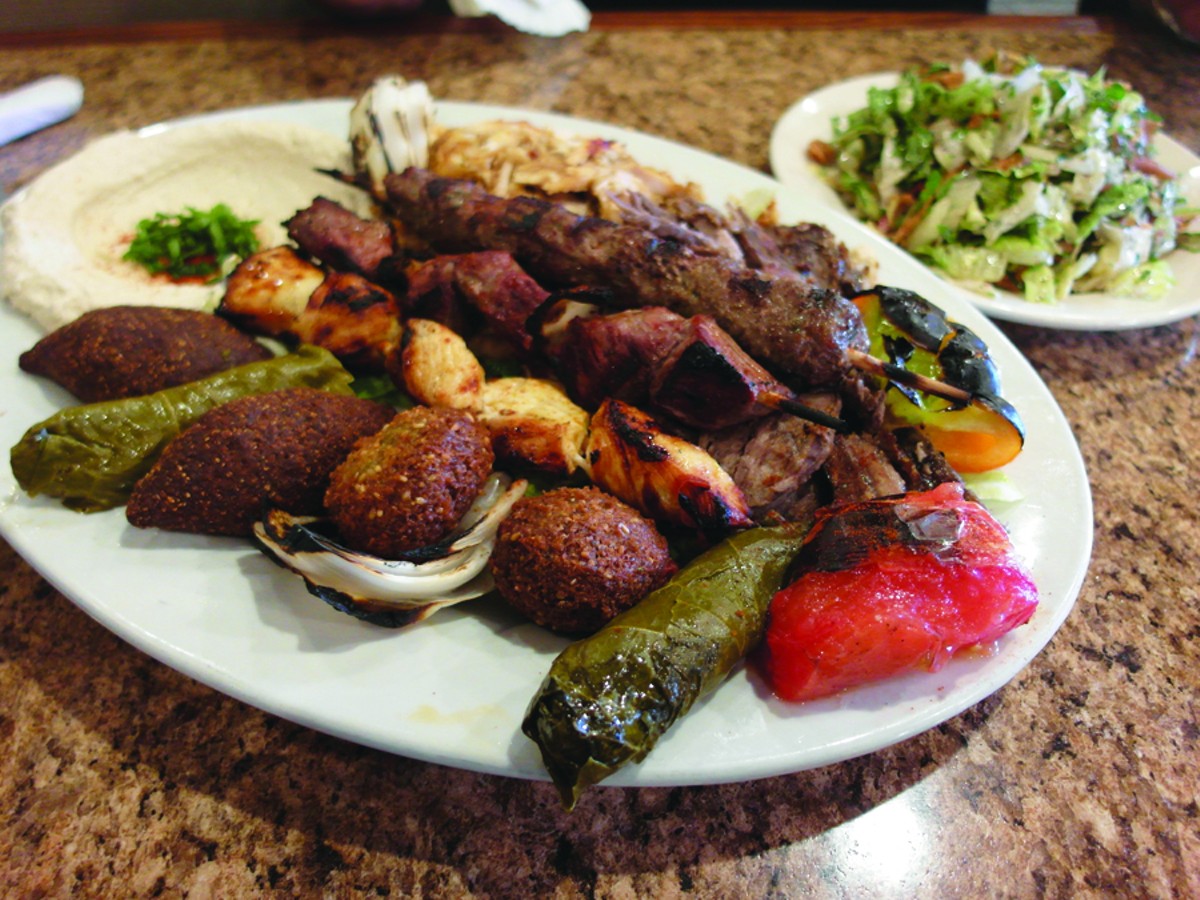 When we think about classic Michigan food, our minds tend to wander to the obvious: the Coney dog, lake fish, pasties, Faygo. Chances are good, too, that Middle Eastern cuisine is on that list ­— particularly from Dearborn. In fact, it's hard to think about the local dining scene without it.

Truth is, not quite 30 years ago, that section of metro Detroit, specifically in east Dearborn on West Warren Avenue — which abounds with imported spice and fruit markets, hookah bars, and halal butcher shops — was mostly void of Middle Eastern cuisine. That is, of course, until Al Ameer came onto the scene.

It began in 1989 when Khalil Ammar and Zaki Hashem opened Al Ameer — then a tiny, three-booth eatery, serving a brief menu of Lebanese shawarma, hummus, and fattoush salad. The idea was to be a quick go-to place for the many Arab American autoworkers employed at the nearby Ford plant.

Word got out about the restaurant and it soared in popularity in the 1990s, says Hashem's son, Hassan, who's a general manager at the flagship location (he also calls Ammar his uncle, in part, because of the founders' longtime partnership). Before long, other similar concepts began popping up, and the stage was set for Dearborn to become a premiere destination for Middle Eastern dining.

"Middle Eastern food is extremely popular. Back then, we were on it way before every other place started opening," Hassan Hashem tells us.

The prestigious culinary foundation called the restaurant back in February to break the news. Ammar picked up the phone and, completely unfamiliar with the organization (James Beard Awards are the food equivalent to the Oscars), directed the caller to contact his son, who did know its significance for the family-run operation.

"When (the foundation) called, my uncle was like, 'what are you talking about?' he didn't know what it was," Hashem tells us. "Coming from Lebanon and not knowing what anything was to receiving an award like this is unbelievable."

It wasn't until Ammar and Hashem were flown out to Chicago in May for the awards ceremony that the duo were able to take in what the recognition meant.

Each year since 1998, the foundation has awarded close to 100 restaurants around the country that serve food that reflects the character of the community while offering a timeless appeal. Of Al Ameer, judges said it's "one of the nation's most welcoming introductions to the pleasures of Lebanese cuisine" and took special note of entrees like the visually appealing sujuk sausage with paprika and cumin, and the almond- and yogurt-rich shredded lamb with rice.

If you've ever dined there, you'll see what they're raving about.

The menu has evolved over the years. While the shawarma and fattoush are still central to Al Ameer's appeal, diners are invited to flex their adventurous side with dishes like the raw kibbeh — a plate of raw ground meat made with bulgur (cracked wheat) and spices. For a more interesting take on breakfast, there's the spot's meat and eggs or the foul mudamas (mashed, boiled fava beans with garlic and lemon juice) — a dish typical in Middle Eastern cuisine.

During a recent visit, we sampled the Alameer Platter off the special house favorites menu. A meaty delight, it was loaded with stuffed grape leaves, fried kibbeh, hummus, salad, falafel, and piles of chicken and beef shawarma, chicken and beef kabobs, and kafta (skewers of ground beef with onions and parsley.) The proteins come from the family's meat market next door. This is obviously a feast for at least two, and provides ample leftovers to-go.

What stands out about the food here is the simplicity of it. Some restaurants load their meats with unique spices, which tends to take away from their natural essence. Al Ameer's fare is light on spices, instead letting the meat's full flavor shine through. Another factor is consistency. Of the service, James Beard judges say "unfailingly warm servers explain the fine points of maza," the 10-dish spread of appetizers, "and define the differences between fattoush and Lebanese salad." It's that level of steadiness that gives guests not only a tasty meal during each visit, but also a mini cultural lesson with every bite, and thus makes Al Ameer a lasting bright spot in Michigan dining.