Spot Lite teams up with Sheefy McFly for its first exhibition 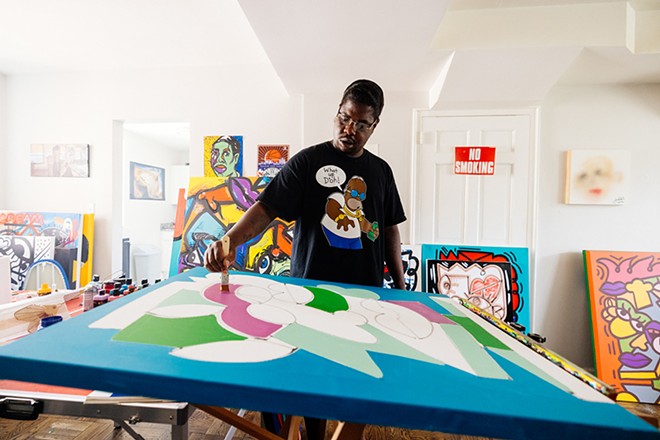 Last year was supposed to be a big one for Sheefy McFly, the Detroit visual artist and musician who mixes pop art and hip-hop influences. It wound up being bigger than he could have imagined.

Back then, Birmingham's posh Robert Kidd fine art gallery approached him about doing a solo exhibition — not bad for a College for Creative Studies dropout who left school to pursue art on his own terms, and was once arrested by Detroit police after they racially profiled him, assuming the commissioned mural he was painting was graffiti. But then the pandemic hit, and the show was canceled.

But during the lockdown, McFly, real name Tashif Turner, teamed up with fine-art print house 1xRun to create limited-edition screen prints of his work. Then, earlier this year, he was tapped by Library Street Collective to help design Monroe Street Midway, a roller rink and basketball court on the site of Dan Gilbert's stalled Monroe Block project, which featured McFly's artwork along with fellow artist Phillip Simpson.

Now, McFly will have a new exhibition at Spot Lite, the new art gallery, bar, and performance space on the east side managed by 1xRun. It's the new space's first proper art exhibition since it opened in May as part of an ad hoc, smaller-scale version of Detroit's annual Movement electronic music festival (where McFly DJ'd).

McFly says the exhibition will include more than a dozen paintings and prints, including paintings larger than five-feet-by-five-feet, as well as some more experimental works. It also includes a painting he did as a commission for the Michigan Opera Theatre production Blue, the company's first opera of the season, which draws from the writings of Ta-Nehisi Coates.

"I feel like it's the height of my style," McFly says of the work. "As of right now, it's a lot of pieces that I made during the pandemic." The show opens to the public on Saturday, with McFly performing a DJ set afterward.

The exhibition will also include sushi from Mobile Fish Pop-Up, and custom nail wraps featuring McFly's designs by Fanessnails, a nail artist who has previously collaborated with McFly. The scene at Spot Lite might be a little more McFly's speed than the Robert Kidd Gallery.

"With the pandemic happening, it just really threw it off — the pandemic was just crazy for everybody," he says. "So I wanted to do the [Robert Kidd] show, but my mind was just in so many different places. And I feel like in the midst of everything, me and 1xRun gained such a rapport, so it just feels natural to do the show now with them. It's a multimedia venue, so I'll be able to showcase not only the artwork, but the music — you know, me being a DJ and stuff like that. So I'll be able to shine in different realms."

He adds, "It feels like family when I'm working with one 1xRun. They listen to me, I listen to them, it's very organic."

The name of the exhibition is Eyes Watching You, which could be a reference to the eyeballs motif that McFly often incorporates into his images.

"In a lot of my work, since grade school, I always drew faces, portraits, you know, just messing around and everything," he says. "So the more that I got into faces, I started to abstract them. And I started really looking at other artists that I was inspired by and seeing what artists see and what we're around, and we're around the human figure more than anything else. That's something that we can always feel in touch with and in tune with. So that's why I feel like I draw a lot of faces and I draw a lot of eyes and everything."

The name could also very well be a reference to McFly's rising profile. He also has work that will be unveiled as part of Grand Rapids' annual ArtPrize festival, which kicks off Thursday and will include a large-scale mural and installation by McFly done in collaboration with the Skymint cannabis company and City Built Brewing that McFly says will be similar to the Monroe Street Midway project.

"It's really taking my artwork a little bit further," he says. "That's what I'm really hyped for as far as ArtPrize and the solo exhibition. I'm showing how far I want to go with the artwork, how much I've grown, and where I'm going."

Eyes Watching You opens with a reception at 6 p.m. on Saturday, Sept. 18 at Spot Lite, 2905 Beaufait St., Detroit; spotlitedetroit.com. Admission to the event is free and open to all ages until 10 p.m., when it is open for adults ages 21 years and older with a $10 cover.