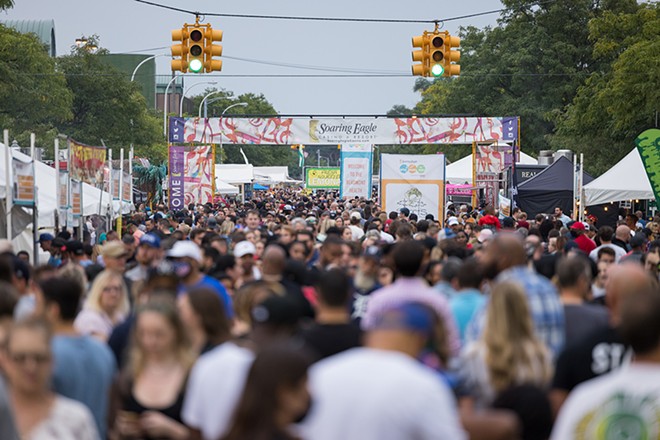 Eighteen Photography
A crowd at Arts, Beats & Eats in 2021.

“We’ve kind of stepped up our music,” says producer Jon Witz, noting that the festival has invested more into bringing national musical acts this year than at any other time during its history.

The festival was held in downtown Pontiac before moving to Royal Oak in 2010, where it has called home ever since.

“Some people aren’t necessarily hitting their stride or their best years as they get this old,” Witz adds. “We’re celebrating a pretty big birthday, and we are at the top of our game in terms of attendance, and recently fighting through the challenges of COVID, and being in a new location, and having 11 of those 12 years in Royal Oak being the best years of our history.”

Beyond the music, the festival will feature a juried fine art show, carnival rides, and food vendors. Witz says he’s also excited for two sponsors who really stepped it up investing more than six figures into on-site brand activations.

Title sponsor Soaring Eagle Casino & Resort will create a gaming area on Fifth Avenue, which includes larger-than-life casino-themed sculpture installations, an exclusive festival offer of $1,000 in free play dollars for downloading the Play Eagle App, and the new Play Eagle Lounge, where guests can dine on dishes from the Cuisine Machine, which serves food based on the offerings of the Mount Pleasant casino’s eight restaurants.

Meanwhile, cannabis company House of Dank is returning as a sponsor. Though cannabis consumption will not be allowed on the premises, the astro-turfed lounge will feature prizes, merch, games like cornhole, DJs from Detroit’s Movement Music Festival, and, new this year, a silent disco. The company will also have reps who can direct attendees to their eight House of Dank dispensaries to purchase cannabis products.

Witz says the festival attempted to get approval for cannabis consumption on-site, to no avail. He says he’s positive it’s only a matter of time before Royal Oak allows it.

“We didn’t get approval on a cannabis lounge, but having an isolated adults-only cannabis lounge is something that I think you'll see in Arts, Beats & Eats in the next couple of years,” he says.

He adds, “When sponsors activate like this, they just create attractions that make the site look better, they create more experiences,” Witz says. “When companies step up like this, it’s just a better experience, a better atmosphere, and makes the festival look better.”

Leyland "Lee" DeVito grew up in the suburbs of Detroit, where he read Metro Times religiously due to teenaged-induced boredom. He became a contributing writer for Metro Times in 2009, and Editor in Chief in 2016. In addition to writing, he also supplies occasional illustrations. His writing has been published...
More
Scroll to read more Festival Guide articles
Join the Metro Times Press Club