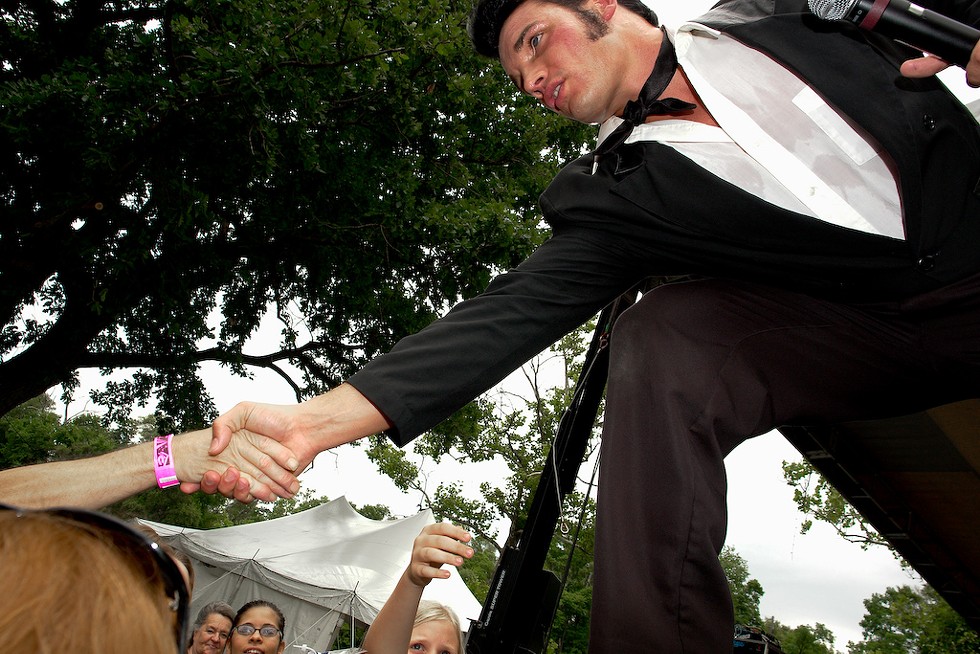 Yes, it's exactly what you might think it would be: the largest Elvis Presley tribute event in the state and, according to some sources, the country. Founded in 2000, the fun includes a classic car show, food, beer, raffles, and, of course, plenty of Elvis impersonators, ranging from pompadour-wearing preteens to people old enough to be the real-thing King. But there will be some pros on the stage, including Chris Ayottes, David Allen, Doug Church, Colin Dexter, Quentin Flagg, Robert Washington, and more — including more sequins than you can shake a stick at.

This makes sense: Since Fremont is the home of the well-known Gerber Products Company — makers of those cute little jars of, say, mashed beet or carrots — it provides a fitting setting for a four-day celebration of all things baby-related. There is, of course, a "kids' zone," a community picnic, a farmers market, athletic competitions, a bed race, and a "baby crawl." Founded in 1990, it all takes place in a rustic little burg about 40 miles north of Grand Rapids.

Every July since 1989, out in the northern reaches of St. Clair County, the city of Yale hosts one of the craziest three-day streaks of family-friendly, wacky entertainment in the state. The festival draws its inspiration from the city's bologna factory, run for decades by the Roy family, a major employer in town, but also a folksy family business where the owner often answers the phone. The local Chamber of Commerce has spun it into a festival that can attract 20,000 guests with antics that can range from the usual — art shows, auctions, derbies, sidewalk sales, clowns, fireworks, hula-hooping — to the unique — a "bologna baby" contest, eating competitions, a bike parade, a bologna ring toss, outhouse races, squirt gun battles, a goofy golf cart parade, cardboard boat races, a duck race, tours of the bologna factory, and the crowning of the festival's bologna king and bologna queen.

Inspired by the engine shows you'll find in rural areas throughout the Midwest, this annual celebration of crafts, folkways, and farming machinery can run into hundreds of registered small engine displays. In a good year, the club will field more than a half-dozen blacksmiths at work, as well as demonstrations of carving, wool dying, spinning, weaving, chair caning, broom making, and even flint knapping. It's almost like a little city, with antique cars, a museum, a sawmill and grist mill, a barber shop, an antique filling station, a farm museum, a tractor scale, and even a drive-in movie. Perhaps you'll be drawn to the flea market, which can include 150 vendors, or the 100 arts and crafts booths and demonstrations. Organizer Deb Matthew says it's a celebration of all things antique, right down to the machinery. "These are old tractors," she says. "These are not souped up." In fact, Matthew's machine is an 86-year-old doodlebug adapted from an old Ford roadster during the Great Depression. "We restored it from nothing to go." In fact, a few years ago, they put out a "doodlebug challenge" and drew about 80 of the homemade tractors. Now there's something you won't find at the Dream Cruise!

Far up in the U.P., less than seven miles from the Wisconsin border, in the late 1980s, naturalists discovered the world's largest, contiguous organism: an Armillaria bulbosa comprising a giant, subterranean mushroom network covering more than 37 acres. Researchers estimate it to be more than 1,500 years old and weighing about 10 tons. Every autumn, it sends up edible mushrooms all over the Crystal Springs area. In gratitude, the village throws one heck of a party every fall. It's called the Humongous Fungus Fest. Activities include a toadstool-themed softball tournament, a strongman competition, a bacon pie-eating contest, a men's "Beardy Pageant," and a vendor village. The mushrooms that sprout all over town are gathered for a cook-off and added to the 10-foot-wide Humongous Pizza. And toadstools aren't the only thing that appear in Crystal Falls that week: Look for a fresh crop of citywide rummage sales during the fungal fiesta. 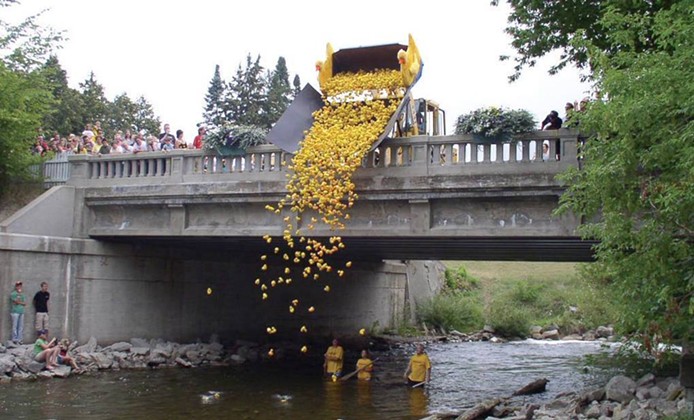 This festival's weeklong schedule of events seems nothing but legit: fun runs, live music, a picnic, and a car show, all vaguely themed to the cute and yellow little fellow. But the climax of the event is a bit of over-the-top weirdness: More than 2,000 rubber ducks get dumped into the Intermediate River at the North Bridge Street Bridge, winding their way toward Lake Bellaire. The duckies are numbered, and after they release the quackers, the winner will be the first to pass the finish line at the Riverside Marina. A $5 entry fee gets you one of the little buddies, and the first 27 to make it through win a prize: win is $500, place is $300, show $100. Tell everybody that you simply have to see the race, then act all surprised to see that Short's Brewery is just down the street.

Wellington Farm proprietor Howard Taylor has always been a collector with a fondness for fading heartland Americana. In 1997, he took his significant and growing collection of post-1900 farm machinery, corralled it on a 60-acre hunk of property, and christened it Wellington Farm, a living history museum depicting life in the rural Midwest during the Great Depression. He'd recently increased his holdings to two dozen buildings, including the Stittsville Church (built 1882, moved to Wellington 2005), an 1870s Grayling sawmill, and a working gristmill, a Civilian Conservation Corps-built structure. Taylor says the tough times have lessons still worth teaching. He says, "They made do with everything that they could. Nothing was thrown away. You never know when you might need that thing or part of it to make something else." Given our wobbly economy and the possibility of another downturn, a trip to see Taylor's monument to thrift and grit might be just the thing to inspire. 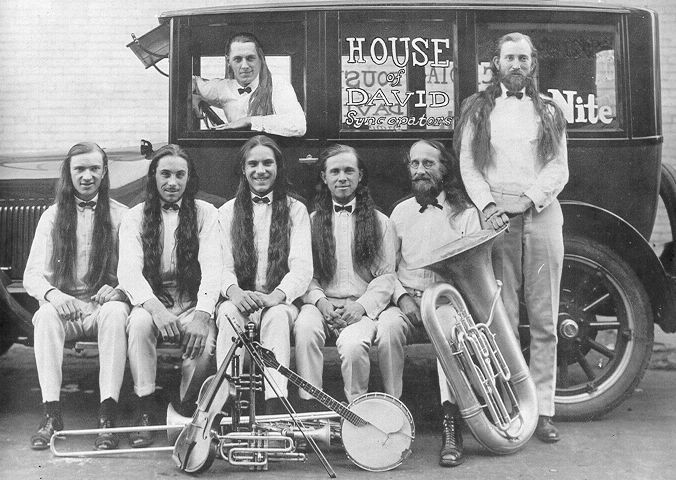 The House of David is one of those remarkable only-in-Michigan stories. A new religion that eschewed haircuts and hedonism as much as it embraced baseball, the House of David established a religious colony on the shores of Lake Michigan about 100 years ago. Their long hair set them apart: In a photo of the House of David band from 1915, they look more like a music group from 1975. Now there's a museum in downtown St. Joseph dedicated to them. It actually has a wealth of material relating to southwest Michigan, but dwells lovingly on the House of David. That's likely because founder-director Chris Siriano once founded another House of David Museum. A post on the Facebook page warns, "Visitors by Appointment Only," so call ahead.

About 60 miles northwest of the Mackinac Bridge, deep in the heart of the Newberry State Forest Area, Dean Oswald cares for a few dozen rescued bears. Many were brought to him by the state DNR, injured or orphaned. Some were even kept illegally as pets. With no state financing, Oswald has to rely on the kindness of visitors, and they'll pay $20 a carload to enter his bear sanctuary, where they can stroll through an area adjoining bear habitats separated by electric fence. Oswald says they're all black bears, which have a reputation for being tamer than most. You can snag a selfie with your family up on some viewing platforms, or, for an extra $10, have your family picture taken petting some gentle bear cubs. Is it safe? Oswald jokes with us, "We haven't lost anybody in a couple of years."

It was only natural that Voss Guntzviller should start a museum dedicated to taxidermy and woods lore. His grandfather George Guntzviller started collecting wildlife and outdoors curios more than a century ago, and Voss' father started practicing the craft of taxidermy in 1928. The son took after the father, and after three generations of Guntzvillers had assembled a massive collection of ever more exotic animals, as well as arrowheads and other native treasures, Voss decided a quarter century ago to turn it into a museum. The work on display isn't for sale — though there is a gift shop where you might get everything from jewelry to moccasins. But one thing you can easily come away with is a selfie with a lion. Even Dean Oswald can't get you that!

Born in 1969 at Mount Carmel hospital in Detroit, Jackman grew up just 100 yards from the Detroit city line in east Dearborn. Jackman has attended New York University, the School of Visual Arts, Northwestern University and Wayne State University, though he never got a degree. He has worked as a bar back, busboy,...
More
Scroll to read more Summer Guide articles
Join the Metro Times Press Club