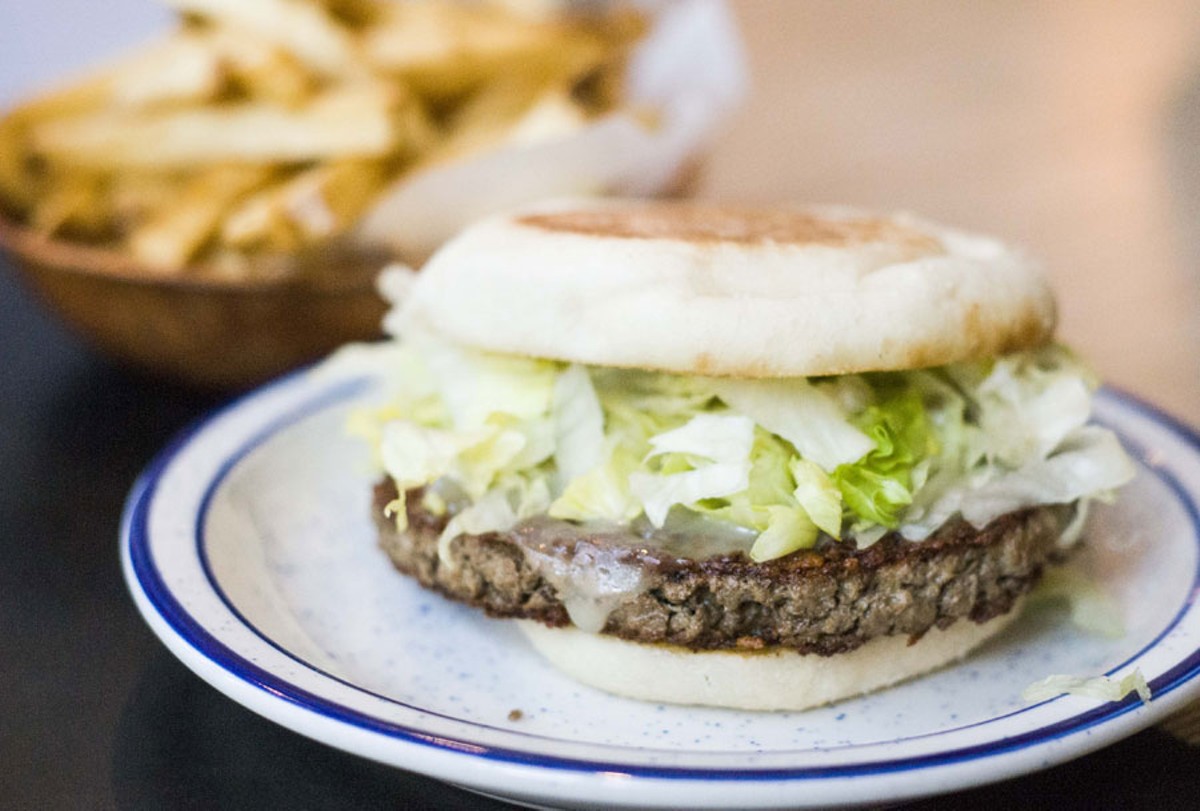 The Green Street from Lovers Only. Tom Perkins

It bleeds like meat! This is one of the big selling points for the Impossible Burger — or, specifically, the Impossible "meat," the veggie-based product that has recently been introduced as another alternative to eating animal.

The crux of Impossible Foods' mission was to create something that re-created the experience of eating meat as closely as possible — something that looks like meat, tastes like meat, and has the textural consistency of meat — including the "bleeding," which is, of course, not blood, not even when you are eating actual meat. That pooling pink liquid you see on your plate when you eat a hamburger is just the "juices" of the burger, but obviously that's not something you're going to get from your typical veggie patty. Impossible Foods wanted that to be different, though — hence the "blood," which, yeah, is kind of weird. But perhaps the market is there.

What is certainly a market that exists is former meat eaters who miss that meat-eating experience. If you're not down with black bean burgers or various other veggie offerings, maybe the Impossible Burger, or another vehicle for the Impossible meat product, could be the meatless savior you are looking for.

Impossible's "meat" is built around wheat and potato proteins. The fat comes from coconut oil and soy. The kicker, the special ingredient that Impossible Foods likes to throw around, is heme, a molecule found in high amounts in meat, and evidently it is what gives meat that "meaty" taste. Impossible Foods has a two-minute YouTube video if you want more information. There are a bunch of scientists dropping knowledge and also some goofy little animations — all of it designed to let you know what heme is all about, and also that it's totally safe to eat. With the cutesy cartoon element, it recalls the expository film in Jurassic Park, although this particular act of playing god is unlikely to end with anybody getting eaten off a toilet. They've taken a protein from soy plants (soy leghemoglobin), extracted some DNA, put it into genetically engineered yeast, and then watched that yeast pump out heme due to a fermentation process. The heme looks like blood.

That may be a little too mad scientist-y for you, but like it or not, Impossible meat is making its way across the country, including metro Detroit. Fortunately for those who want to try it, the company makes it extremely easy to find out where you can get it. They have a nationwide map on their website (impossiblefoods.com) where you can search for Impossible offerings near you.

One of the first places we spotted an Impossible Burger on the menu was at Rosie O'Grady's (279 W. Nine Mile Rd., Ferndale; 248-591-9163; rosieogradysirishpub.com). The burger they serve is super basic, which is the way a lot of the other places in the area serve it: bun, lettuce, tomatoes, and onion. It's the most generic way to eat a burger, but also the perfect way to try the Impossible for the first time. It truly looks like a hamburger. It has the texture of a hamburger. Yes, it even kind of tastes like a hamburger. Some folks complain that the Impossible Burger falls into a sort of culinary uncanny valley — it's not exactly meat, but since it gets so close it causes a disconcerting sensation — but unlike with late-'90s CGI movie effects, we did not get that uncanny feeling. Rosie's also serves an Impossible Burger with their vegan patty melt. The Impossible patty is adorned with onions, swiss cheese, and Dijon mustard on sourdough bread.

You can also find Impossible burgers at Honest John's (488 Selden St., Detroit; 313-832-5646; honestjohnsdetroit.com), the Detroit diner that is generally known for its brunch outings. They also have three separate Impossible offerings. One is a basic burger, but they also have an Impossible Reuben and an Impossible Eastsider. The two sandwiches are roughly the same, except the Reuben has sauerkraut and the Eastsider has coleslaw. A note on the corned beef: They do not have slices of Impossible meat. The patty is not altered in any way, and was just placed on a sandwich with Thousand Island and sauerkraut. That being said, Honest John's also lets you get Impossible meat in a quesadilla or on nachos.

Downtown Detroit's Lovers Only (34 E. Grand River Ave., Detroit; 313-986-1174; loversonlydetroit.com) serves up the Green Street, which is an Impossible Burger, white cheddar, lettuce, and a parsley and shallot yogurt on an English muffin. On top of that, for a dollar you can substitute an Impossible patty onto any of their burgers.

Ale Mary's is a beer hall in Royal Oak (316 S. Main St., Royal Oak; 248-268-1939; alemarysbeer), where they don't so much ask what you want to drink, but what kind of beer they can get you. However, they also have a lengthy vegan menu (and vegan cocktail menu), including Impossible chorizo tacos. Here, they cut up a patty and put it in three small tacos, combining it with diced tomato, carrots, and also some avocado, served along with rice. If you aren't in the mood for tacos, Ale Mary's also offers three different Impossible Burgers. Right next door to Ale Mary's is Tom's Oyster Bar (318 S. Main St., Royal Oak; 248-541-1186; tomsoysterbar.com). Though primarily known as a seafood place, they do have an Impossible Burger. The main thing that sets it apart from others is that they offer a "vegannaise," and also a side of vegan fries.

Lastly, Punch Bowl Social (1331 Broadway St., Detroit; 313-749-9738; punchbowlsocial.com) in Detroit has a burger that features pickles, tomato, an onion jam, and a sesame seed bun. But things can, and likely will, change. The Impossible Burger seems like it's gotten trendy — or perhaps it's even beyond trendy, given that it's now at White Castle.