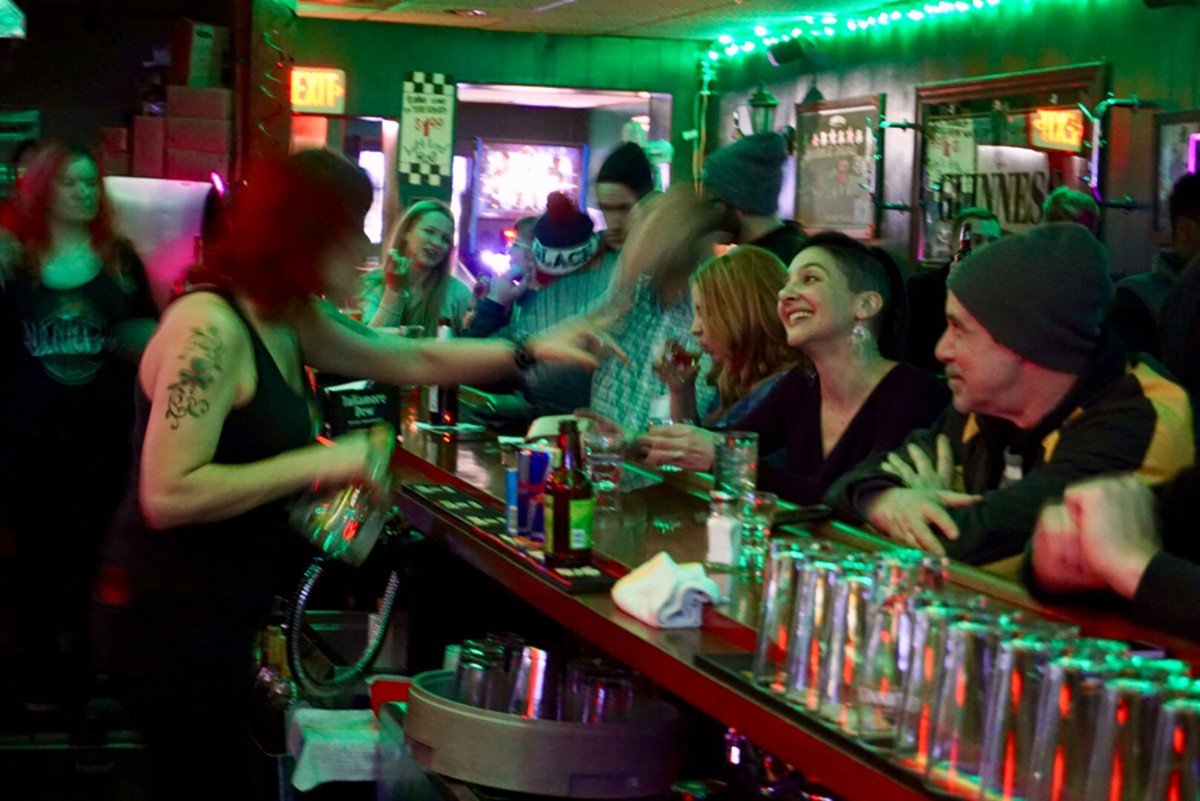 There's something about a good Irish pub that appeals to any practiced bar-goer. The dark paneled walls, just like your granddad's house, the hint of fug that brings back the ghosts of cigars long past, the green beer and car bombs...

Oh, wait. Not those last two. Listen, if your idea of celebrating St. Patrick's Day involves electric emerald Bud Light, blinking plastic trinkets flung into the street, or locking arms and yodeling out "Danny Boy" at the top of your lungs, stay at home this weekend, please. Detroit's beleaguered Irish bartenders have enough to put up with and will not welcome another fake Lucky Charms accent. And truly, skip the car bomb — they're offensive and take forever to make and clean up. Just order a whiskey already; it was perfected in Ireland, after all.

A great Irish pub, especially in Detroit, is a surprisingly rare find. In fact, if the whole bar was assembled in a factory in Rathmines and then shipped over via freight, it's far less likely to be appealing to the actual Irish-American drinker than the cinder block building that's been in a strip mall for 30 years, with a questionable mural painted outside by someone's niece. There's no true formula for the magic of a good pub. There are, however a few signs that you've found the right place. Here are a few pointers (from someone who has spent far too much time in pubs) for finding your perfect new spot.

Is there a snug? A snug is a throwback to those antiquated days 25 years ago when women (supposedly) didn't frequent pubs. Of course they always have, though, so old pubs have a semi-private booth tucked next to the bar with direct access to the bartender so the ladies could get their drink on. Or so rowdy groups could pile on top of each other. In Detroit, snugs are pretty much nonexistant, since our women have long given zero craps about who sees them drinking.

It's 3 o'clock in the afternoon. Are there at least two old men nodding over pints or arguing loudly about politics or sports? Good. Those are the men that have been holding down those bar stools for decades. They know everything about everything, and by longstanding tradition they form a secret society whose rules you will never understand. If one of them nods at you on two separate occasions, though, consider yourself initiated. You can also apply for membership at the Gaelic League or the Ancient Order of Hibernians; all but two days out of the year, there's plenty of opportunities to hear stories of the old country.

What's the food situation? Artisanal scallops and $20 shepherd's pie do not a traditional Irish dinner make. If they have a full menu, a good stew or fish and chips are much more traditionally Irish than corned beef and cabbage. Honestly, the Irish are not known for their fine cuisine, so potatoes of any kind should be predominant on the menu and a weekly Friday fish fry should be standard. Or you could just grab some of Nemo's stellar burgers. A perfectly acceptable dinner choice are the year-old imported crisps with funny flavors stapled up behind the bar, washed down with a Guinness or Smithwick's.

Does the bar sponsor a local sports team? This is crucial. It can be a 4-year-old's soccer team or the local drunks' kickball league, doesn't really matter. Good pubs know they're a community gathering spot. They also know that the parents or the kickballers will bring everyone back to the bar for a pint. That's smart business. Danny's Irish Pub in Ferndale usually has at least one rowdy softball team on the roster.

What's the smoking section look like? Yes, yes, smoking is illegal in Michigan. That doesn't mean the diehard Irish quit altogether, so any pub worth its salt will make its outdoor smoking section conducive to enjoying a pint in the process. Kudos to Dunleavy's in Allen Park for having not only spacious, but also heated, outdoor smoking.

What's playing on the TV? At the barest minimum, it should be Premier League soccer. Much better if it's Galway United or Gaelic football or hurling, the rules to which can only be revealed if you grew up in Ireland or you've been initiated by one of the grumpy old men at the corner stool — preferably after you've bought them several pints. Thomas Magee's in Eastern Market opens early to show all the Liverpool FC games.

What's playing on the jukebox or from the band? If it's "Sweet Home Alabama" or even "Whiskey in the Jar," please understand that every bartender wants to puke when they hear those songs. And "Danny Boy" is a damn funeral song, so that's right out. Considering that it's Detroit, all things Flogging Molly are fine, but spare us Dropkick Murphys' "Shipping Off to Boston" unless you are in fact imminently departing for Beantown. The Pogues are always a good bet with the exception of Spider vocals-era Pogues. That's never OK. If there's a live band playing, they should be sufficiently scruffy and at least one band member should be named Pat, Paul, or Michael and have very crooked teeth. Local band Stone Clover brings their "Detroit Paddy Slag" to the Old Shillelagh on Saint Patrick's Day.

What's the whiskey selection? The old "Jameson is Catholic and Bushmills is Protestant" saw is as Irish as corned beef, which is to say not at all. Any Irish pub has both in several varieties, and it doesn't matter a bit which you drink. Look beyond those two, though, and a solid pub will also have a range of Powers and everything from the obscenely delicious Midleton Very Rare to the insanely cheap but surprisingly good Paddy. Check out McShane's or, if you're up north, Sullivan's Public House for a good sampler.

The best pubs, of course, are the ones you feel comfortable in. Your bartender should be friendly without being overly intrusive, and should have a generous hand with the whiskey. The Irish have created a legacy from exporting hospitality, after all.

Where to celebrate Saint Patrick’s Day in Detroit

Mickey Lyons pretty much grew up at Nemo's, which compelled her to get a masters degree in Irish Studies in Boston. Now she's back in Detroit and tells stories for a living.