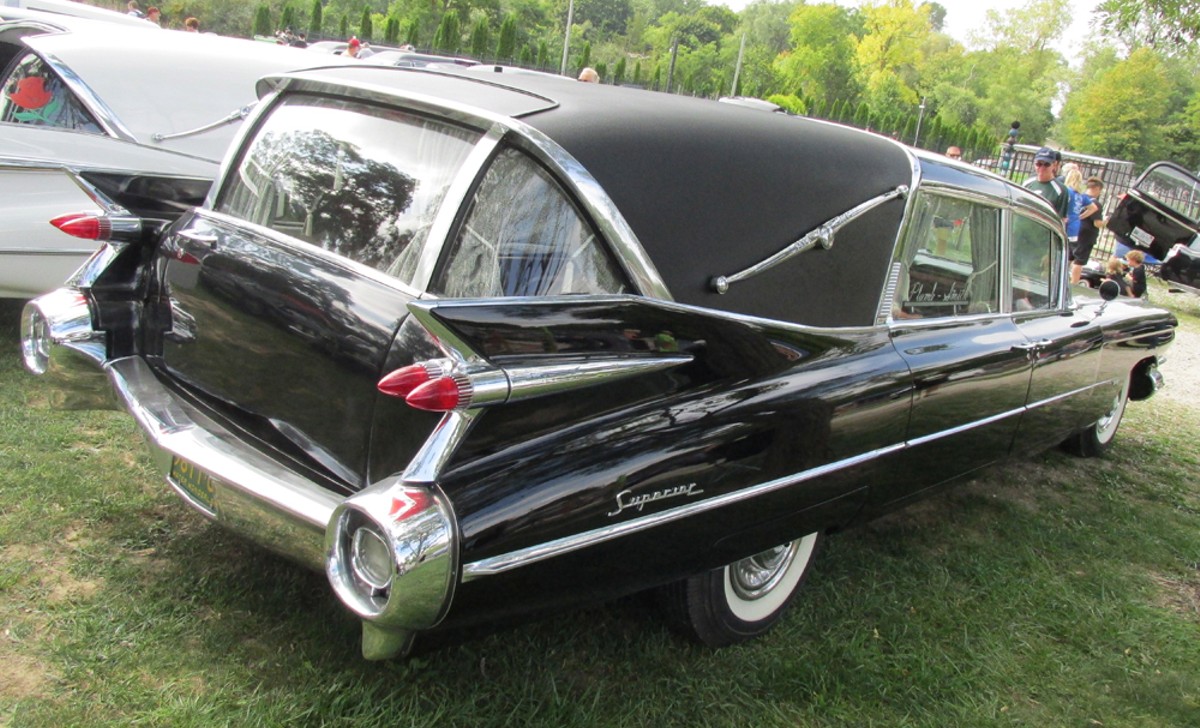 Ronnie Duke fell in love with hearses when he was just a boy.

"I really can't explain where the fascination came from," says Duke. "I can remember as a small child walking into a hobby shop and there was a model — just a plain model of a hearse, you know, a glued-together kind of thing. And I just had to have it. Well, Mom said no."

"The car was sitting in some guy's front yard," he says. "I drove past it every day, literally for two years. Finally I just decided to stop and talk to the guy about it and he's like, you know, 'I bought this thing in Minnesota, drove it home, parked it there.' He planned on making a camper for hunting and just never did anything with it. So he's like, 'You know, I paid $800 for the car. You give me my $800 back, you can have it.'"

Beauty, of course, is in the eye of the beholder.

"It was very rusty and ugly, but it was awesome," he adds.

The thing is, Duke is not alone. He now owns two, and his wife owns one. He's also the president of the locally based hearse car club Just Hearsin' Around, which has hosted a hearse enthusiasts meet-up, fittingly held in the small town of Hell since 2000. But there are so many hearse heads that the group had to move the this year's event, which is on Saturday, about a 30-minute drive north to Fowlerville.

The move to the Fowlerville Fairgrounds will allow for more cars, as well as added security. Duke says they needed it, as the fest has drawn fans from all over the world.

"We had a couple actually fly in from Austria to Chicago and rented a car just to come to the show last year because it has become that popular that they have heard of it all the way over there," Duke says. "We have a handful of members that come in from Canada. We got people coming in from as far south as Texas. They're coming in from everywhere. ... We've got a group that comes up from South Carolina picking up more hearses and people along the way, just making a large convoy on their way up here. They make a whole week out of it. They make a week-long adventure out of the trip."

As in past years, the fest will show off all sorts of carriages originally designed to give the dead their last ride — "everything from completely stock from the carriage manufacturer to restored museum-quality pieces to 'I'm just having fun with it and this thing barely runs, but it's here,'" Duke says.

The move from Hell means there is no on-site restaurant or ice cream parlor, but Duke says they'll bring in food trucks. The move also allows for an expanded number of vendors hawking hearse-related goodies and other spooky Halloween-themed wares. As in past years, there will also be live entertainment, a costume contest, and a pine box derby. And Butch Patrick, better known as child werewolf Eddie Munster from The Munsters, will be on hand for autographs and photos, along with the Munster Koach and Dragula cars from the show.

This year will also feature a hearse parade at 6 p.m., in which the club will try and regain the Guinness World Record for the longest parade of hearses that they last held in 2011.

The relocation means the fest has to charge a paltry cover: $2 spectators above the age of 16.

"We say if you're under 16, you could be an aspiring hearse owner and we just want to encourage that," Duke says. "There's nothing strange about it."

Hearse Fest starts at 10 a.m. on Saturday, Sept. 21 at the Fowlerville Fairgrounds; 8800 W. Grand River Ave., Fowlerville; justhearsenaround.com. Admission is $2 for spectators over the age of 16.