Giving by the book: A rundown of Detroit tomes for the literates in your life

Reliving Detroit's "Golden Age" — Over the last decade, Chris Edwards and Elaine Weeks have churned out five books about the Windsor area. This year brings readers 5,000 Ways You Know You're From Detroit, the duo's first book about our fair city, and it's a doozy. The handsome coffee table volume has been released in a "collector's first edition" that's almost 500 pages, and big and heavy enough to beat Dick the Bruiser to death. It's absolutely packed with Motown memories that will appeal to most readers north of 50. Contributors include Lowell Boileau, Carl Lundgren, Leni Sinclair, and S. Kay Young. The century-long story of the city's rise, fall, and tentative rebirth is told with archival photos, down-to-the-details lists, and biographies, all with an appealing design style. Pretty much all of Detroit's golden age is jammed in here: auto companies, historic buildings, theaters, bands, amusement centers, newspapers, entertainers, athletes, riots and rebellions, shopping, diners, and, of course, the ruins. It would make a great gift for parents, grandparents, and even young people curious about that brief moment when Detroit was a top 10 U.S. city. (Walkerville Publishing; $49.95, detroit5000.com)

Motown as seen across the pond — One book coming out in paperback just in time for the holidays is British Northern soul fan Stuart Cosgrove's Detroit 67: The Year That Changed Soul. We've heard some fans of Detroit history and Detroit music call it "a weird book" because of its efforts to meld the two into a narrative that includes such far-flung threads as the Vietnam War, Florence Ballard, Muhammad Ali, and the MC5. It seems the book would have benefited from peer review, or at least better editing might have caught the misspellings and rookie errors many locals have complained of, but, hey — at paperback prices, it might make that thoughtful gift for a music fan, a political history maven, or a Tamla collector. Take your pick. (Birlinn Ltd., $15) 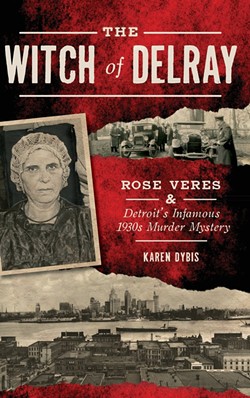 Detroit's 1930s "witch hunt" — Readers may remember Karen Dybis as the author of 2015's Better Made in Michigan, the last word on the iconic Detroit potato chip company. This year saw publication of her book The Witch of Delray: Rose Veres & Detroit's Infamous 1930s Murder Mystery. In August 1931, police arrived at the boardinghouse of Hungarian immigrant Rose Veres to investigate the death of Steve Mak, who'd apparently fallen to his death from the top floor. This was in the "bad old days" of yellow journalism, and Veres and her family were quickly convicted in the press, with Rose being called "The Witch of Delray," portrayed as a woman whose boarders left in pine boxes while she kept the insurance payouts. She and her son were sent to prison for life, until they were finally granted new trials more than a decade later. Along the way, readers get a look at the freewheeling, wide-open town Detroit was in the 1930s, and get to meet a colorful cast of characters that includes a relative rarity, a female attorney in 1940s Detroit. (The History Press, $21.99).

Giving some Herb — Another new book on black Detroit this year comes from journalist, academic, music lover, and former MT contributing editor Herb Boyd. Readers may recall his contributions to our radical's oral history of the summer of 1967. Boyd's book is called Black Detroit: A People's History of Self-Determination, whose deep history of black Detroit stretches back into the 19th century, when the city was a beacon for black Americans long before the Great Migration. Boyd mines the century and comes up with pure gold, recounting not just the riot of 1863 but the lesser-known disturbance of 1833. But what gives Boyd's book special value is that there are few people like him left to comment on Detroit in the 20th century as lived history. And when you consider that he's a talented writer capable of expressing himself, you know you're in for more than a stroll down memory lane. (Amistad, $21)

Detroit's checkered race record — In September, New York Times readers got a look at the scholarship of historian Tiya Miles in an op-ed offering many examples of slavery that happened up North, and included plenty of examples from early Michigan and even Detroit history. Sure, the city was the last U.S. stop on the Underground Railroad, but its history is also sullied with slavery and mistreatment of both blacks and Native Americans. Miles tells that story in her new book, The Dawn of Detroit: A Chronicle of Slavery and Freedom in the City of the Straits, which came out in October. (The New Press, $22) 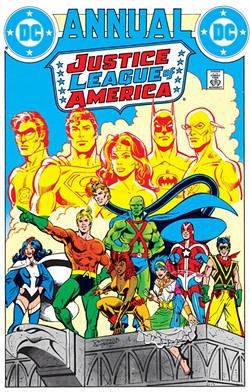 Hey, comics geeks — If you're a real DC fan, you already know that, in the mid-'80s, Aquaman cleaned house at the Justice League of America. He fired the big-named stars and replaced them with such lesser-known heroes as Vibe, Vixen, and Elongated Man, housing his all-new team in an abandoned warehouse in downtown Detroit owned by one of his new recruit's grandfathers. The iteration became known as the "Justice League Detroit," and now its stories have been collected into Justice League: The Detroit Era Omnibus, a hardcover oversize edition featuring the group's entire timeline edited by Gerry Conway. It comes out Dec. 12, just in time for that superfan out there who's been waiting for this for years. (DC Comics, $125)

Get woke — Southfield native Erik Love is a professor of sociology at Pennsylvania's Dickinson College, and his new book brought him to speak in Birmingham a few weeks ago. It's called Islamophobia and Racism in America, and, as you might expect, it centers on Islamophobia as a form of racism, and how it's used by politicians, and how the fight against it doesn't fall into any prepared civil rights category. When Islam embraces people from all over the world, the fight against Islamophobia isn't really a fight against "racism" per se. Or is it? Certainly bigoted attitudes toward Middle Eastern peoples are a part of the phenomenon, but then not all of them are Muslim either. Love presents an interesting topic that needs clarification and discussion so the fight against hate can gain better traction. (New York University Press, $28) 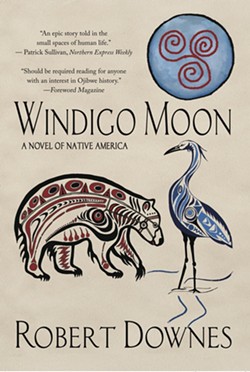 A monster of a tale — Robert Downes is a Michigan writer and the former editor and co-publisher of a Traverse City alt-weekly. Since 2013, he's written a string of nonfiction books, but this year brings his first work of historical fiction, Windigo Moon. The book is based on actual Ojibwe history, set in the upper Great Lakes over a 25-year period beginning in 1588. The narrative features warfare, vengeances, supernatural creatures, a love triange, warring tribes, and even a mini-ice age. Even history mavens seem to have learned a thing or two from Downes' work. (Blank Slate Press, $18)

Everybody's island — Arcadia Publishing continues to churn out attractive "postcard histories" of Detroit, and this year saw the release of one called Belle Isle. As with other Arcadia titles, this isn't a scholarly, rigorously researched book, but it does collect hundreds of postcard images that show the island park's development over the years and some of its key attractions, many now long gone. Given the way Belle Isle has been a touchstone for generations of Detroiters, it would seem to have wide appeal. (Arcadia Publishing, $21.99)

An automotive maverick — Mavens of automotive history may enjoy the latest from History Press, Michigan's C. Harold Wills, a biography of the engineer who helped Henry Ford get his early cars off the drafting table and onto the road. Wills parted ways with Ford in the 1910s and built his own factory for his short-lived auto company, Wills Sainte Claire, now memorialized in a museum in Marysville. (The History Press, $21.99)

Really saying something — Readers may recall that last year's Gift Guide featured a story about Dave Krieger's book Things I Do in Detroit: A Guide Book to the Coolest Places by the Nain Rouge. That coffee table book had reimagined Detroit's mythological mascot as a suave and debonair man about town, featuring scores of photos of him socializing as if nothing were abnormal. This year, Krieger gives us a thick little book with hundreds of quotes from Detroiters over the last three centuries, hence the jokey title: Things People Say About Detroit: A Collection of Quotes as Told to the Nain Rouge. It's the perfect stocking stuffer for that history buff, destined to occupy a spot atop their toilet tank in the new year and beyond. (KMW Studio Publishing, $17.95) Good enough to eat — We hear that when Paul Saginaw and Ari Weinzweig first asked bankers for a business loan to start a deli, the bankers flatly denied it, saying a deli would never fly in that part of town. Look who has the last laugh! The Zingerman's empire now encompasses a deli, bakery, two restaurants, a bakehouse, and the output now even includes cookbooks. Zingerman's Bakehouse offers scads of recipes compiled by Amy Emberling and Frank Carollo, accompanied by hunger-inducing photos from Antonis Achilleos. (Chronicle Books, $21)

A clutch of Dutch — For the really serious fan of Elmore Leonard comes this "box set" of sorts of the late author's greatest crime stories. Naturally, it's called Elmore Leonard: The Classic Crime Novels, and it presents several handsome hardcover editions of the Detroit-based writer's yarns, more than 2,700 pages of them. (Library of America, $80) 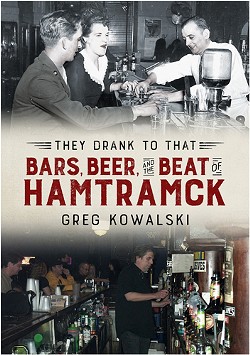 The best damn drinking town in the U.S.A. — One-man Hamtramck history factory Greg Kowalski has brewed up another book just in time for Christmas. It's called They Drank to That: Bars, Beer, and the Beat of Hamtramck, and it's a look back at the city that was rumored to have the most liquor sales licenses for a town of its size. (Even a few years ago, it was up around 30 per square mile.) Kowalski zooms in on the history of drinking, the music people drank to, from polka to punk, and does it all with the care of a doting historian. It's scheduled to come out Dec. 11, and signed copies can be pre-ordered at hamtramckhistory.org. (America Through Time, $23)

Born in 1969 at Mount Carmel hospital in Detroit, Jackman grew up just 100 yards from the Detroit city line in east Dearborn. Jackman has attended New York University, the School of Visual Arts, Northwestern University and Wayne State University, though he never got a degree. He has worked as a bar back, busboy,...
More
Scroll to read more Gift Guide articles
Join the Metro Times Press Club