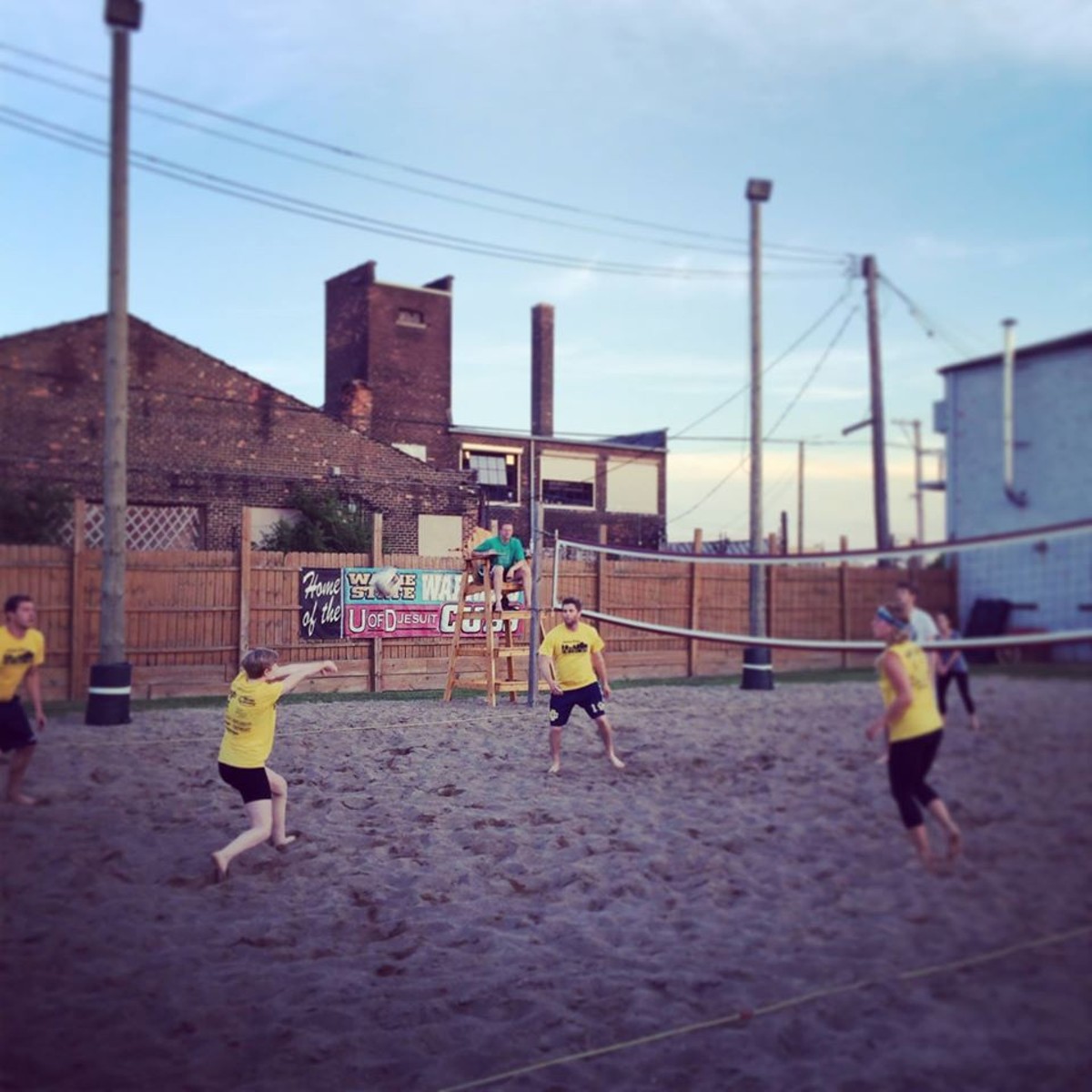 We're going to go out on a limb and declare Z's Villa is Detroit's best bar where you can play sand court volleyball, a game of horseshoes, and cornhole. If there's another bar that offers all of the above somewhere in city limits that we haven't yet encountered, Z's is almost certain to be the only one that also hosts "trash can football," a game of its owners' invention that is exactly what it sounds like (like basketball, but with trash cans. And a football.) A volleyball league has dibs on the volleyball court 6 p.m. Mondays through Fridays, but the it's available for the public any other time. There's no cost to play games, but be sure to buy a beer or two, or treat your team to one of Z's deep dish pizzas afterward.

We love our dogs. We want to take them everywhere we go. Especially when we're drinking. Locally owned doggy day care Canine to Five has made the dreams of all dog and drinking lovers come true. Their summer series, Drinking with Dogs, is a special happy hour that allows you to bring your pooch, sip some sweet cocktails on the patio, and generally enjoy the company of other dogs and dog lovers. Each installment is held at a different bar in Detroit or Ferndale. In July, Northern Lights Lounge, Como's, and Pronto will all host. Cover is free, but you'll have to pay for your drinks.

More often than not, networking is a painful thing. Thankfully there is Drinks X Design. Every month the networking (and drinking) event is held at a different location, whether it's a historic structure like the Guardian Building or a space like the Sit on it Detroit's warehouse. It's always free to get in, plus beer, cocktails, and snacks are complimentary too. Full disclosure, Metro Times sponsors the events, but they're run in partnership with the Detroit Creative Corridor.

Drifter is Detroit's newest (and possibly cutest) coffee shop on wheels. Local barista Alleah Webb bought a beat-up silver and Tiffany blue Serro Scotty Guacho camper and enlisted the help of family and friends to not only get it ready for the road, but for serving up steaming cups of Joe. She uses Rochester-based grounds from Dessert Oasis Coffee Roasters as well as Plymouth-based Espresso Elevado. She also serves tea and pastries. You can spot around town at local farmers markets like Eastern Market, Wayne State University Farmers Market, and Western Fruit and Meat Market.

Expect an extra-special party at New Center Park's amphitheater celebrating 20 years for the Detroit brewery that was instrumental in such important movements as local art, seminal music, and craft beer. The party marks the release of the brewery's Ghettoblaster beer in cans with a total tap takeover at the amphitheater's bar. The bar's longtime weekly art series will be referenced with a new 15-pack of cans with a box featuring all-new artwork by local artist Glenn Barr. The bar will also be releasing a third volume of local music. Then there's the bill of bands, still to be announced, which, in the mellow setting of New Center Park, should provide the perfect accompaniment for a cold one.

Amphitheater opens at 6 p.m., Aug. 1; performances 7-9 p.m., at the southwest corner of Second Avenue and West Grand Boulevard, across from the Fisher Building, Detroit; newcenterpark.com

Who likes to drink and doesn't enjoy an affordable drink in an enjoyable atmosphere? Any night of the week at Nancy Whiskey's will surely present a pleasant, relaxing evening. If you're looking for a place to escape the heat and revel in decent company, it's a sound place to start. Beyond that, drinks here are easy on the wallet; you can snag a beer for $1 and a pour of whiskey for $3, straight-up, neat, on the rocks, or whatever. In a shrinking era of dive bars situated in friendly neighborhoods, it's a treat for the city to still have such establishments around like Nancy's.

The Whiskey in the Jar is a dimly lit, cozy little tavern. There are about seven stools at the bar, and enough low tops to leave just enough space to squeeze by them when they're full. The jukebox is usually blaring, people are always talking, and there seems to be a continuous game of billiards. But the things that make this a cool summertime getaway have little to do with music. First, there's the ice-cold beer, next there's the patio screened off with privacy fence from the alley, and then there's that air conditioning. The bar is so small and the air is so powerful that you might walk in for a cold drink on a 90-degree day only to find yourself shivering in your shorts and wanting a blackberry brandy to warm you up. The only colder place in Hamtramck is the meat locker at Bozek's. Now if only that had a bar.