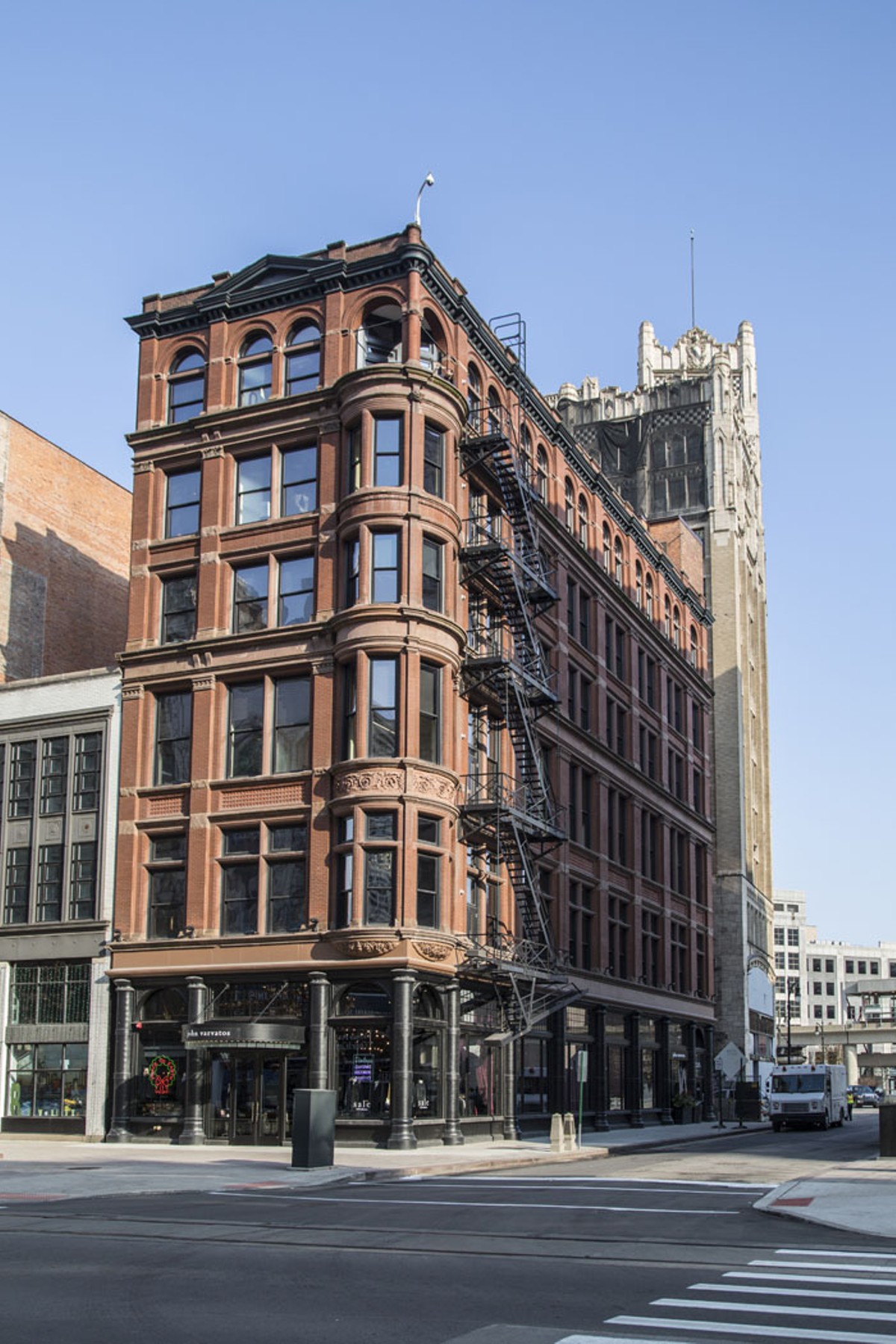 There's a similar storyline playing out in major U.S. cities. From downtown Los Angeles to New York City to Seattle, younger people whose parents left for the burbs are moving back and breathing new life into urban centers that suffered neglect and the troubles that come with depopulation.

In that sense, Detroit's narrative isn't totally unique. But, perhaps because it fell further than most, perhaps because of its cultural importance, the lightning-quick regeneration of its downtown, the rate at which developers have blown the dust off dozens of old skyscrapers, and the dizzying pace at which mid-rises, homes, offices, and factories that sat un- or underused are repurposed or redeveloped is especially exciting.

It wasn't too long ago that Detroit felt more like a vast, surreal museum than a city. One could lie down in the middle of Woodward Avenue on Friday night and not worry about having to be scraped of the pavement. Now, it's the subject of countless "Phoenix rising" pieces and, importantly, the data supports that recent years have seen a dramatic change in the city's decades-old storyline, and also point to some interesting situations.

Most notably, Detroit's population of around 680,000 may increase next year for the first time in decades, largely because people are moving to its downtown districts. Around a third of its commercial property sat vacant in 2010, while in 2014 that figure had dropped to 14 percent. In that time, the number of people working in the downtown jumped by 18,000 from 67,812 to around 85,000.

Notably, the number of people living downtown — 5,302 in 2014 — hasn't increased much because the area's occupancy rate is at 99 percent. The housing shortage is a result of the roughly 40-year exodus to the burbs. Hardly anyone wanted to live there during that time, so there was no need for new housing.

Bob Rossbach, the Detroit Economic Growth Corp.'s press czar, has a favorite anecdote about life in downtown Detroit. Around 10 years ago, two Grosse Pointe empty nesters left their home and started renting in downtown's Kales Building. But demand for downtown living spiked, and their monthly rent followed suit, so they recently moved back to Grosse Pointe to save some money.

Those occupancy numbers, by the way, come from the 7.2 SQ MI project (the 7.2 square miles referring to the area taken up by downtown districts), which is a partnership that includes the Hudson-Webber Foundation, Detroit Economic Growth Corp., Downtown Detroit Partnership, Midtown Detroit, Inc., Invest Detroit, and Data Driven Detroit.

But which developments drove the trends?

It would be wrong to answer that question and not start with the man receiving the credit for spurring downtown's rapid makeover, Quicken Loans founder Dan Gilbert, who brought 6,000 young people with him when he moved his businesses to Detroit a few years ago.

Gilbert's Bedrock Real Estate Services acquires, leases, finances, develops, and manages commercial and residential space. Since its founding in 2011, it has invested $2.2 billion in acquiring more than 85 downtown properties — mostly mid- and high-rises — that it filled with around 150 new tenants. The company's downtown holdings total 14 million square feet, according to its spokesperson, Natalie Gray.

It's difficult to choose just a few of the Gilbert fiefdom standouts, but among those that Gray highlighted is the first downtown Bedrock investment — the five-story [email protected] Building at 1555 Broadway Ave.

When built in 1917, the historic mid-rise was one of the first grandiose movie theaters in Detroit and sat at the edge of the city's new theater district. Now, the [email protected], whose tenants include Twitter and Microsoft Ventures, is the first in what Bedrock bills Detroit's burgeoning tech district. Gray highlights that the building is outfitted with SMART building technology allowing for remote control operating, is energy efficient, holds open floor designs with collaborative work areas, offers open meeting rooms, includes a 135-seat auditorium, and boasts rooftop event space that overlooks Comerica Park and Ford Field.

Among the largest Gilbert rehab projects in terms of volume was the neoclassical, Albert Kahn-designed First National Building. The 26-story, 822,000-square-foot building's occupancy rate sat at 50 percent when Bedrock acquired it and, with tenants like Honigman, Detroit's largest law firm, its occupancy is now near 100 percent.

The new tenants in Gilbert's buildings are going to need to park their cars, so building a parking garage isn't a bad idea. The 1,287-space Z Garage is the only parking tower with personality in town. Vertical lights in different-sized rectangle windows provide a unique facade for the 10-story, 535,000-square-foot garage, which also functions as sort of a revolving street art museum. Each floor is decorated with a different, colorful, one-of-a-kind theme and murals from 27 different artists.

As of 2012, the 103-year-old, 23-story Dime Building at 719 Griswold St., became the Chrysler House. The U-shaped, neoclassical high-rise is home to Chrysler's first ever Detroit office space. Like the First National, occupancy at the Dime never broke the 50 percent threshold in recent decades until it received the Gilbert treatment. The Chrysler also houses the headquarters for the design firm dPOP!, which turned the building's old bank vaults into office space, and Quicken Loans. Its ground-floor retailers include local mom-and-pop food faves like Bon Bon Bon and DROUGHT Juice.

It takes more than office space and retail to make a city hum. Perhaps the most important downtown residential renovations were the 34-story Broderick Tower, revived in 2012, and its Grand Circus Park neighbor, the 19-floor David Whitney Building that was brought back online with apartments and a hotel in 2015. The buildings offer a combined 232 apartments, and both hung "No Vacancy" signs quickly after accepting lease applications, demonstrating the need for new housing downtown. The tabs for renovations at the opulent, neo-renaissance Whitney and neoclassical Broderick totaled $94 million and $53 million, respectively.

Just as the Broderick began moving in its tenants, the Cass Corridor's Auburn did the same. It's notable not for its size — it holds 58 apartments — but for being the type of mixed-use, modern, high-end development that are all the rage in super hip and thriving neighborhoods like Chicago's Lincoln Park. It also introduced off-the-charts rents to the Cass Corridor at $1,000 for a one bedroom in 2012, which could've covered two apartments in the neighborhood just a year or two earlier.

Right around the corner from the Auburn is the 400 block of Canfield Street, which blossomed into Midtown's retail epicenter and is providing perhaps the first look at next-level gentrification. The new kid on the block is Jack White's Third Man Records, but recent years have seen the opening of Shinola, where one buys bikes or watches for $1,000, and the Canfield Lofts, where one goes to spend $540,000 on a 1,600-square-foot loft. Fifty-dollar shaves can be had at Fellow Barber's, and City Bird offers artisanal housewares and gifts. If you feel bad that you can't afford any of that, drink away the blues at the well-loved Jolly Pumpkin, which is the block's third brewery. It joins longtime favorites Motor City Brewing Works and the Traffic Jam and Snug. And, of course, the area's first dog park, a definite sign of the times, recently opened on the block.

All the previous developments came in what could be described as the "New Detroit" era. Who were the trailblazers who saw the promise when downtown received regular comparisons to Chernobyl?

Thinking a little outside of the box, Slows Bar-B-Q, the restaurant that convinced suburbanites that Corktown is safe and funky, has to be on that list. It opened in 2005, and its wild success sparked a chain reaction of new restaurants along Michigan Avenue that continues today. Moreover, Slows' owner, former male model and all-around decent guy Phil Cooley, was among the first in town to extensively use repurposed wood pulled from derelict buildings.

But going back even further, one can't talk about moving earth in downtown Detroit without mentioning the work of developer, entertainment mogul, parking lot desert manager, and corporate welfare artist Mike Ilitch. He built Comerica Park for the Tigers in 2000, and that at least got people remembering that downtown Detroit existed. That paved the way for Ford Field, and suddenly there are over 105,000 seats available for watching the Tigers, Lions, concerts, and other huge public events. The projects cost a combined $750 million and needed around $300 million in public funds to be built.

Also among the major league redevelopments is that of the Westin Book Cadillac hotel, at 1114 Washington Blvd. The luxury hotel also offers downtown's most prestigious apartments, and is the development that demonstrated luxury living can exist in Detroit's high rises. The 29-floor neorenaissance castle was the world's tallest hotel when it opened in 1924. But it fell on hard times in the 1970s along with the rest of the city, closed in 1984, and it took $200 million to fix it up and reopen in 2008.

And the Book Cadillac has been white-hot real estate since. The sale price for a 4,500-sqaure-foot, three-story penthouse? $1.2 million. Can't afford to buy? Then lease for $3,000 per month.

The Book Cadillac is also notable for housing Roast, a "meat-centric" restaurant on its ground floor opened by Michael Symon. He would be the first of many celebrity chefs to start cooking in Detroit.

Gilbert wasn't alone in shepherding his workers across Eight Mile. Blue Cross Blue Shield maintained a large downtown presence, with around 3,000 employees in its two buildings, but in 2011 and 2012 brought an additional 3,400 to Detroit.

Though it's not a specific development, the 2005 Super Bowl is remembered as a major marker in downtown's comeback for several reasons. First, prep work included the short-order clearing of dozens of abandoned downtown buildings, for better or worse. Second, people who normally wouldn't come downtown, who thought it was a bit of a pit, came to see it in a different light.