Back to Au Sable: Freshwater traveling among the salts of the earth 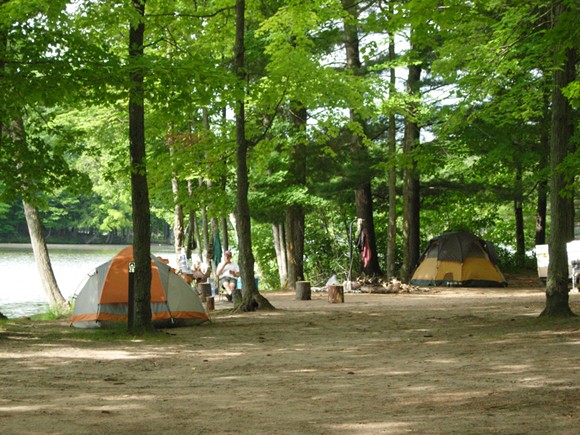 For the second year in a row, my Hamtramck friends and I went on an early-season canoe trip in the Huron National Forest. Up around Mio, a 23-mile segment of the Au Sable (oddly, pronounced ah-SOB-bow) River is a designated  "scenic river" with campsites for canoers. Last year, I went with my friends Steve Cherry and Jeff Fournier, but this year we managed to convince Andy Dow, owner of the Painted Lady Lounge in Hamtramck, to come along.

So Andy and I drove up together on a Tuesday afternoon before Memorial Day weekend and got to Mio early. So early, in fact, that we went to a local bar, where a few grizzled old-timers sat sucking on longneck bottles of beer and eyeing us warily. Finally, one of them asked where we were from.

"Jesus Christ," one of them said. "I'm from Hamtramck."

Another one laughed and piped up, "Me too!"

They regaled us with stories about old Hamtramck. The guy sitting across from us said his parents owned a few bars in the Polish area, one on Chene in Poletown. The other guy in the baseball cap went into a drunken reminiscence of his family house there.

But then he scowled and declared, "You still live there? I thought no white people lived there. Those black people ruined it."

Except he didn't say black people.

In fact, for the next few sentences, he absolutely napalmed us with N-bombs. They ruined this. They ruined that. Obviously, he was one of those Detroit expatriates for whom north of Hall Road wasn't far away enough. He finished the rant with, "It's a goddamn shame."

"Please, no swearing," the bartender promptly said, and made him put money in the jar for saying, "Goddamn." This was a real family-friendly bar, after all.

But only the drunk guy was pestering us. The other people there were friendlier, trying to change the subject to the past, to avoid troublesome topics. Yet, the old drunk interrupted again.

"And those Muslims!" he cried. "You know," he said, getting close to me, conspiratorially, "they want to take over the world!"

"You might not realize, mister," I told him, "but me and my friend left our turbans out in the car."

He drew back in disbelief, then, realizing the other patrons were laughing, mostly at him, settled back in on his barstool.

"Well, where do you work down there?" he asked.

"Nobody works in Hamtramck," Andy Dow joked, giggling as he added, "We're all living on your taxes. They gave us so much welfare, we get to go on vacation!"

"What?" he cried, again distracted by the laughter.

"How about it, Pops?" I asked. "They're taxing your pension so we can live it up on the river!"

Another patron teased him about his government pensions.

"I earned that goddamn money!" he cried.

Before the bartender could say anything, he thrust a dollar at him for the swear jar. "I'm gonna need to pay in advance at this rate!" he shouted.

Aside from the drunk, though, the people were cool as hell in that lazy Oscoda County way, with plenty of time to shoot the breeze and drain some cold beers on a Tuesday night. One of them urged us to say hello when we passed his house on the river, telling us where it was.

Oddly, before we left, Pops urged us to join him on a late-night jaunt to a place called Mr. T's Roadhouse. But with the sun setting, we decided it was best to head to Mio and set up camp.

Our other friends, Steve Cherry and Jeff Fournier, arrived late to our camp just outside town. In the morning, we packed up and headed to the livery in Mio and they dropped us in the river.

I'm a little ambivalent about canoeing. On one hand, it's a wonderful way to slip silently through the wilderness, spying wildlife and using your wits to pilot a small craft — as well as one hell of a core workout. But on the other hand, it takes a lot of effort. It's like, no sooner have I lit a cigarette and cracked a beer than I have to start paddling again. Luckily, the conditions were excellent, warm temperatures with almost full sun, and very few bugs.

We brought everything: not just sleeping bags and tents and cookware but chairs, several coolers, bags of food, several changes of clothing, lots of firewood, even a cast iron Dutch oven. Surprisingly, it's not really a hardship to pack a lot of gear into a canoe. You have to make sure that you have some stuff where you can get at it, but all your things can be waterproofed in case you spill, and it can all be tied under the thwarts, and it gives you enough ballast to sit comfortably up on your seat. That's a must when you're paddling in shallow water, and the levels on the Au Sable this year were definitely lower than last year.

Our first day on the river, we paddled about 10 miles downstream in moderate wind. That wind didn't cooperate much, blowing us from side to side. But I learned how to fight it better than I had in the past. Thanks to all that ballast, I was confident enough in my balance to shift the angle of my canoe against the wind by lowering a leg to one side, all while powering through broad, wide paddle stokes on the other side to fight it. You don't always win. Sometimes you give up fighting and backpaddle on the wind side to keep faced downstream, although you lose time and momentum. Heck, sometimes you can't win and have to let the wind swoop your canoe down the river backwards until you can find an eddy and turn around again. After all, the river is the boss.

Interestingly, we did canoe by the home of the old-timer from the bar. He had been watching for us, and rushed out onto his property to wave. That was nice.

Finally, all four of us unloaded at Cathedral Pines, a beat-up campsite up a rugged slope. We had to huff our stuff up and across a field, and, after a day of canoeing, we were whipped. We ate and didn't talk much, drank beer, conserved our firewood, and stomped on june bugs until we passed out.

Dow left in his canoe to get back to running the bar before we took off on our longest canoe leg of the trip: 13 miles. The wind was almost entirely at our backs. A few times, it was so straight and strong to my back I secured my paddle and just spread my jacket open for a push. It was unreal.

It was a daylong trip, and we passed quite a few guys fly-fishing in shallow water at high noon. Now I wonder: Are they insane? They do realize that they're fishing at the wrong time of day, don't they? Unfazed by that, they just stand there in the shallows and throw hooks at canoeists, vacant smiles on their faces. The river rules say you're supposed to respect them, but how do you respect a man who's fishing at the wrong hour? That's like trying to fly a kite when there's no wind.

And then some party kids took "our" campsite. The campsites nearest the river are supposed to be reserved for canoe campers, but these folks were already there when we clambered up the hill, and started lying to us about there being no other campsites, or not enough fire rings for the eight people they wanted to bring. We asked one of them where he was from and he said, "Nowhere." What dicks. They quickly set up a tent to hold the spot and drove off to pick up the rest of their friends. We briefly discussed peeing on the tent, or perhaps taking a dump in it.

If that sounds juvenile, remember, this was around 5 p.m. Friday on Memorial Day weekend. The livery would want to close early and maybe couldn't pick us up if we hit the end of the line, and there was no camping allowed there. We decided to chance it on one last campsite being available at the last camping stop left before the end. Cherry chugged ahead and found the place. A convocation of eagles soared above us, auguring well. Cherry humped a cooler up to the nearest campsite and set it atop a picnic table, claiming the spot. About five minutes later, a steady stream of cars started probing the road. We had just narrowly got our camp.

Plus we were running low on wood. As luck would have it, we saw a truck drive by with wooden sides on the bed hand-painted with "Firewood for Sale." We gave a shout, and the truck driver backed in and started chucking off the biggest pile of wood for just $10. His name was Raymond, and he'd just bought the truck for $150. Now he was making some money selling wood to campers.

That evening, we ate well and had a large fire. Raymond's wood burned very well. Unfortunately, we were running out of water. Cherry had a filter pump, so we pumped cooler water into gallon jugs for drinking. Even with the filter, though, I thought the cooler water tasted faintly of meat, so we added some orange Tang. For good measure, not wanting to get sick on meat water, we added a generous measure of vodka. We began to call this drink "the Astrotini." But as even this water ran low, we kicked ourselves, wishing we had asked good old Raymond to come back and take us to the store for more supplies.

The next day, we were delighted when we saw his $150 truck pull up again.

"I thought you guys might want a ride to the store. I'm just dropping off my daughter, but I'll come back and give you a ride if you want."

We said we'd love a lift to the store, and high-fived after he drove away. Fournier said he'd go and, after much feverish discussion, I think our shopping list was: more ice, water, beer, liquor, smokes, chips and baby wipes.

You know, just the essentials — when basking in nature.

Born in 1969 at Mount Carmel hospital in Detroit, Jackman grew up just 100 yards from the Detroit city line in east Dearborn. Jackman has attended New York University, the School of Visual Arts, Northwestern University and Wayne State University, though he never got a degree. He has worked as a bar back, busboy,...
Read More about Michael Jackman
Scroll to read more Summer Guide articles