Advice from an Upperclassman

Life is a backpack my incoming freshman friends. Don't let others fill it up for you. 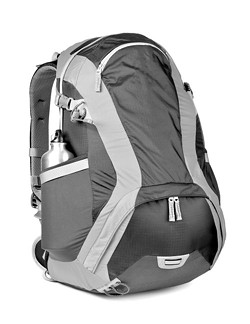 Close your eyes and imagine a backpack. Yes, that one you lugged around for years in high school, digging deep into your shoulders as you added another book because you weren’t sure if there’d be time to stop by your locker between Spanish III and Calc II.

Now, imagine it empty. All the pockets displayed in their vivid barrenness, a state you’d not known your backpack to exist in since its purchase. Appreciate that image, because shortly your backpack will again be filled; only now it’s with expectations and not books.

Expectations that will dig into your shoulders in a way that’s distinct from what you’ve grown accustomed to throughout high school as you cross the threshold into college life; expectations that aren’t yours.

There are a lot of things people will tell you to expect from college. They’ll try to fill that empty backpack with rules, guidelines, “how to’s” and then zip it up before you’ve even had a chance to think about what you might want in the bag.

It’ll come from everywhere too: Your parents, grandparents, siblings, aunts, uncles, friends and foes. They’ll tell you how to live, what to do, what to be, and so on. It happened to me, to my friends and most likely it’ll happen to you too.

Some of it will be heartfelt and worthwhile, like when my father told me not to be a stranger; a lot of it will seem nonsensical, because, well … a lot of it is.

My grandmother told me — in as serious a tone as I’ve ever heard the woman emit— not to believe everything “they” say. “They” was a reference to professors, whom she thought to be one step below maniacal evildoers, hell-bent on filling my guileless mind with wild conspiracy theories and other general madness.

It was good advice; still is. I would caution all you soon-to-be freshman to consider it. To take it even further, don’t believe anything anyone says. Listen, but don’t take their words as gospel. Remember: No matter how much anyone else believes they know what should go into your backpack, it is still your backpack. You have the choice of what goes into it.

Once that backpack of yours has been filled, bursting with all the things other people tell you, set it back on your bed. Look at it one more time — the seams prepared to split at any moment. Then open and empty it. In other words, politely take in all the advice and then discard.

You don’t want to walk into your first college class with a backpack already digging into your shoulders so don’t burden yourself with expectations. There are many things college will burden you with in the next four years — and you’re just getting started. Then again, who goes to class with an empty backpack? Shouldn’t you at least have a pencil in there? You should.

There were many things people told me before I left the rolling hills of Oakland County for the flatlands of Lansing. None was what I wish I had already packed in my backpack going into college. So, take it from me, a kid who’s been there before and knows a thing or two about what would be helpful.

The first is to not be overly punctual — unless it’s for class, in which case “being on time” almost certainly means you’re 20 minutes early. This will lead to awkward wandering around the area you were supposed to meet up with friends and craning your neck like a turtle toward the door to see if anyone you know is walking in.

Even if no one can tell what you’re doing, inside you will likely feel like a moron. Leave a few minutes later than you normally would, and make sure all your electronics are charged and ready to entertain you if need be. For all you chronic “lates” out there: Stop being such a douche and making your friends feel like morons.

The second is that you will most likely have a doppelganger on campus. Your friends will confuse you for them and vice versa — multiple times. The trick is to dispose of this person or, if you’re peaceful, simply avoid them.

Why? Depending on how close the likeness is, there is a possibility that that is not a doppelganger, but in fact a version of you from a different dimension. If you two were to meet there very well could be a hole torn in the space-time continuum. Don’t be the asshole that tears a hole in the universe.

You will likely be a different person even one month into college. In most cases, it’s a good thing. You will be more mature and truly shocked once you return home and feel light years beyond the friends you left in high school — even though you remain only a few years apart. It comes with the territory. You’ll be on your own and you’ll learn more about who you are as a person than you ever did before.

The final item, and perhaps most important, is that it’s okay to be scared. There are a lot of things that will scare you in college. You’ll have a panic attack because you have to pitch a story idea the next day and you’re just not sure it’s good enough.

You’ll have multiple panic attacks. You’ll question what you’re doing with your studies, if you’re headed in the right direction, if you even know what you want to do with your life. Unless you’re Captain Awesome and have been sure you want to be a doctor since your parents gave you a plastic stethoscope, chances are you will have doubts and you will be scared.

(That last one is courtesy of a particular author — do you know who?)

Eric Walters was an editorial intern at the Metro Times this past summer. This was his final assignment. Send comments to [email protected]