Rolling Stone magazine's No. 1 greatest album of all time is getting a hometown celebration in honor of its 50th anniversary.

Marvin Gaye's 1971 Motown-recorded masterpiece What's Going On will celebrate its 50th anniversary on Friday, May 21, and will be honored with special Motown Museum tours, a street-naming ceremony, and exclusive commemorative merchandise.

On Friday, the Motown Museum will host 90-minute VIP Marvin Gaye-focused tours every hour from 11 a.m.-5 p.m. Tours will have limited capacity (there are only a few time slots left, by the way) and, according to a press release, will “feature special guest appearances from Motown alumni” who will share with visitors behind-the-scenes stories about how the album came to life, as well as memories and stories about the late icon, who died in 1984 after being fatally shot by his own father in Los Angeles.

Tickets are $50 and will support Hitsville U.S.A.'s preservation efforts and the cost of admission will include a limited-edition item from the museum's "What's Going On" retail collection.
click to enlarge 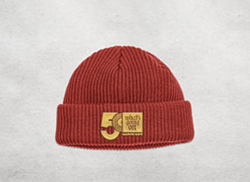 Speaking of merch, starting Friday at 8 a.m., the museum will release a beanie, much like the one Gaye frequently wore, as well as a commemorative lapel pin. Other items are expected to be released throughout the year.


The celebration will continue well past the album's landmark anniversary. On June 19, the City of Detroit's Councilman Roy McCalister Jr. has teamed with the Motown Museum to rename a stretch of West Outer Drive at Monica Street, near the singer's home where the record was largely conceptualized, as “Marvin Gaye Drive.” The street naming event will feature dignitaries and remarks about Gaye's legacy and the record's impact.

The event also coincides with Juneteenth, which will be honored with a city-supported Jubilee Stroll down Detroit's historic Avenue of Fashion.

"We are proud to share with the world that Marvin will have a street named after him right where his genius and creativity was thriving in Detroit,” Motown Museum Chairwoman and CEO Robin Terry said in a statement.

“With Councilman McCalister’s vision and enthusiastic support from the neighboring community, this moment is now a reality that will live on for future generations. We are thankful for his leadership, the continued support of Gov. Gretchen Whitmer, and those who want to tell the world about this incredible legacy born in Detroit. The enthusiasm for the celebration continues to illustrate that our work in inspiring the future in the spirit of Motown is alive and well in a meaningful way.”

For more information on tours, merchandise, and other events, visit MotownMuseum.org.