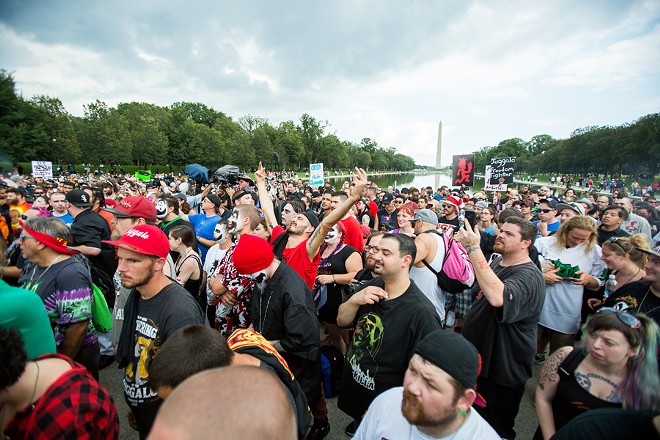 Detroit hip-hop duo Insane Clown Posse is not down with the clown at The Atlantic who wrote a story comparing the supporters of Donald Trump to their fans, the Juggalos.

On Tuesday, The Atlantic's published a story by journalist Graeme Wood "What to Do With Trumpists." In the piece, Wood wrote, "At noon tomorrow, our four-year experiment in being governed by the political equivalent of the Insane Clown Posse will finally end. It is ending in Juggalo style (some have called it 'Trumpalo'), violently and pointlessly, with a handful of deaths, the smearing of various bodily fluids, and a riot on the way out."

But ICP's Shaggy 2 Dope told Huffington Post that he found the comparison to be unfair. A decade ago, the FBI labeled Juggalos as a "hybrid gang." The duo teamed up with the ACLU to contest the designation, but the move was ultimately unsuccessful.

"I can’t believe TheAtlantic.com would hire a writer, presumably for his expertise in journalism who’s that off the mark, as well as an editor for his or her fact checking abilities who obviously lives within a reality separate from our own when it comes to defining who Juggalos truly are and what they’re about," he told HuffPo.

For one, ICP are way better leaders than the Trump administration. For example, they were quick to cancel the group's annual festival, the Gathering of the Juggalos, at a time when Trump was still downplaying the virus.

“With tens of thousands of deaths due to the COVID-19 outbreak, we can't possibly in good conscience even consider trying to put on a gathering during these difficult times,” ICP's cancellation statement at the time read. “The bottom line is simply that we refuse to risk even ONE Juggalo life by hosting a Gathering during these troubling times. In closing, we want everyone to heed the words of Fred Fury and Flip the Rat: Be Safe: Watch your step and take it easy. You can't replace what you mean to our team. Without you, tell me where the fuck we'd be?”

That was a better and more coherent message about the pandemic than Trump's office ever put out.

Furthermore, ICP held a "March of the Juggalos," a peaceful protest in Washington, D.C. that drew more than 1,500 fans to challenge the FBI designation. Meanwhile, a gathering of Trump supporters on Jan. 6 to contest the results of the 2020 election resulted in hundreds of Trump supporters storming the Capitol, and violent clashes with police that left at least five dead and led to the FBI rounding up dozens.

It was enough to give even Shaggy 2 Dope the creeps.

"The truth is it fuckin’ hurts and [it’s] scary seeing professional adults acting like savage bullies," he told Huffington Post of the Trump supporters, adding “sad little bullshit like this makes me question the media in general and [lose] a little faith in just about [everything] I fuckin read!”

Maybe Trump supporters need to be considered a "hybrid gang," instead.