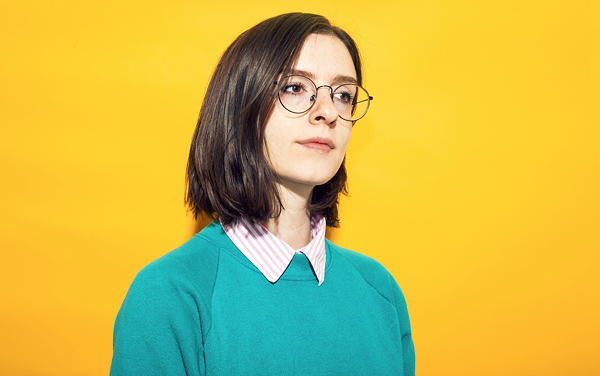 Detroit's Stef Chura has announced a new seven-inch for Record Store Day. The record features two tracks, "Degrees" and "Sour Honey," which were cut from her 2017 debut, Messes.

The songs were produced by Will Toledo of Seattle-based indie darlings Car Seat Headrest, who also plays guitar and bass on the record. As Chura recounted in our 2017 Bands to Watch feature, she and Toledo met after Toledo read a Pitchfork review comparing their two bands. Chura details how that turned into a collaboration in a press release:

"I met Will Toledo in 2016 when we did some touring together with Car Seat Headrest. We chatted at the Empty Bottle in Chicago at our first show and he told me that he found my music on Tumblr via an article that compared us to each other. He invited us on a couple of tours that year before Messes was out and before we had a label or booking agent or release plans or any 'stuff.' In May of 2017 we ran into each other again at the Empty Bottle. Will was mixing Twin Fantasy and came out to our gig there with the engineer he’d been working with. He invited us to the studio to check out the record the next day. When we stopped by Will had finished mixing early and asked us if we had anything going on recording-wise. I said I have a couple of songs that got cut from Messes I want to record for a 7-inch and he was like 'Cool, wanna record them right now? I'll play bass.'


A limited edition 7-inch (1000 copies) will be available at select stores on Record Store Day, April 21, 2018. According to the press release, Chura and Toledo are collaborating on Chura's sophomore record.

You can listen to "Degrees" below: