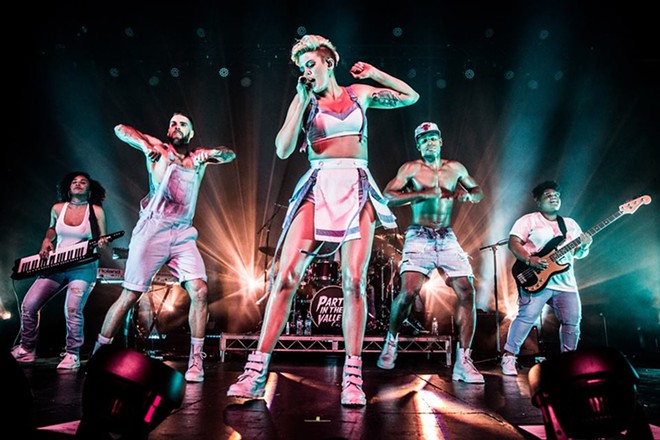 No, she's not a character from a Dr. Seuss book living in the town of Whoville hanging out with Cindy Lou Who. Betty Who happens to be your next favorite pop star, and she happens to be playing here in Detroit.

The first time we heard about the Australian-born pop singer was when her early hit "Somebody Loves You" was used for a surprise flash mob engagement video of a man proposing to his boyfriend in a Home Depot. The video went viral, the guys appeared on Ellen, we all cried, and Betty Who had herself a recognizable hit (plus she played the song at their wedding).


So in case you have nothing going on tonight, or maybe you watched that YouTube video four years ago and want to find out more about Betty Who, here are five stellar reasons that you should go tonight.

1. Here infectious pop music that is straight out of the 1980s.
Betty Who's first album, Take Me When You Go, sounds like it could be the soundtrack to a never-before-seen John Hughes film. Bright and shiny synths mix with electric bass lines all while supporting Who's breathy vocals.

On her second album that she released this year, The Valley, Who sticks with the synth-heavy keys and drum machines, but a touch of R&B seems to be present, almost as if the 1990s wanted in on the fun. Who told us about her experience writing the new music. "I really wanted to make music on this new record that I could dance to and would make me feel happy when I performed them live." she says. "I learned a lot from touring that it's not fun to perform songs that don't make you feel good."

2. She's added backup dancers to the live show.
Obviously if you're making pop music with a great beat and a catchy hook like Betty Who does, you're going to want to dance. Betty Who shows are normally dance parties anyway, but now she's brought some of that energy in the crowd onto the stage with her. "I did add dancers to the show," she tells us. "I have two dancers on the tour and it's so fun."

Who tells us that she surprisingly didn't grow up dancing, so it's a new talent that she has recently discovered, but had always wanted to try growing up. "I was never really encouraged to dance because I was always told I was too tall so people literally told me not to dance, which is crazy when you think about that now," she says. She adds that it was discouraging growing up, but now that she's a grown-up she can "do whatever the fuck I want!"


3. She's one of the most body-positive pop singers making music today.
Betty Who describes herself as an "in-between girl," something that she hopes to bring more awareness to when people think how society looks at women's bodies. "Growing up I was never a sample size, but I was never really overweight either. I've been bigger than I am now, but at the end of the day I'm never going to be a size 6 and I'm never going to be a size 16," she tells us.

"I'm fine being a plus-size model, but most of the plus-size models who are getting work are bigger than me. They are incredibly much more beautiful and more fabulous than I am, understandably, but I feel that I don't get booked or get a brand partnership because I'm either not big enough or small enough."

Betty Who's love for her body and its strength come through from her live performances and music where she can create a welcoming and positive space. "I just want my fans to feel happy when they come and see me," she adds.

4. She's a major, major advocate for the LGBTQ community.
Who has a core fanbase in the LGBTQ community, something that Who says sort of happened organically when she booked to play a bunch of Pride festivals a few years back. "I was asked to play a Pride festival and it just happened from there," she says. "I played my first show in New York a few years ago and I thought nobody was going to show up and then all of a sudden 100 gay men show up."

While she embraced the gay men that first started coming to her shows, the rest of the community has been swept away with Who's music. "It's just this huge group of diverse people that love you and I will forever be grateful to them," she says. "Playing Pride festivals every summer is my favorite time of the year."

5. Michigan is her second home.
While Betty Who was born in Australia, she moved to northern Michigan when she was a teenager to attend the Interlochen School for teens who excelled at the performing arts.

Who got accepted into Interlochen because she excelled at playing the cello. From there, she began to sing and was highly encouraged from the staff at the school.

"My parents have a house in Traverse City and still live there full-time, so when I go and visit home I'm going to see them there," she says. "So Michigan was my first official home in America so every time I go and visit it just makes me so happy. I love it there so much."

Betty Who performs tonight at the Magic Stick with special guests Geographer, who has a new song out. Doors are at 7 p.m. and tickets are $18. You can get them here.