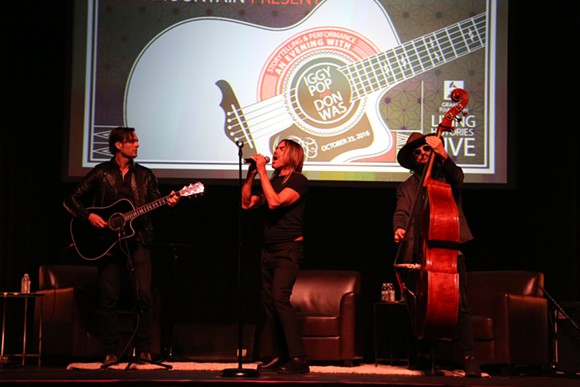 Iggy Pop gave a unique, four-song acoustic performance Sunday and mused on the formation of The Stooges and his inveterate connection to Detroit in the first of three appearances in the city this week.

Pop and Rolling Stones producer Don Was were at the Majestic Theatre for a GRAMMY Foundation event, “Living Histories Live.”


“There was an industrialism about it,” Pop, 69, said of The Stooges’ self-titled debut album. “A handmade industrialism. It was just in there.”


He compared The Stooges’ style of composition with William Burroughs’ “cut-up” method of writing during a conversation with GRAMMY Foundation Vice President Scott Goldman. “Ron [Asheton] would just start making loud noises and listen to the amp.”


A multi-hour interview with Pop was recorded at the Townsend Hotel in Birmingham on Saturday for the Foundation’s archive.


“We’re here in many ways to celebrate the diverse musical history of Detroit,” Goldman said. When a list of famous Detroit artists was read at the beginning of the event, all were met with cheers and applause — with the exception of Ted Nugent, whose name was booed by the crowd.


Pop appears again at the Detroit Institute of Arts at 7 p.m. Tuesday with filmmaker Jim Jarmusch for an advance screening of the documentary Gimme Danger: The Story of the Stooges. On Sunday, Pop described the film as the culmination of his “finishing the job” with The Stooges.


At 9:30 p.m. Tuesday, Pop appears at Third Man Records Cass Corridor with Jeff Gold, the author of Total Chaos: The Story of The Stooges/As Told by Iggy Pop, which goes on sale Nov. 16.


Was, 64 — an Oak Park native, founder of the band Was Not Was, top-drawer producer, and president of Blue Note Records — said Sunday’s GRAMMY event, and the fact it was staged in Detroit, was meaningful to him.


“I got really choked up driving over here, to tell you the truth, man,” Was said before going onstage.


At Was’ school, Motown records were played in the cafeteria at lunch, and he said it was the music that defused possible racial tension.


“It was dancing to Motown records that really thawed everything out.”


Pop gave insight into his songwriting approach Sunday in conversation with Goldman.


When Pop was asked about his collaboration with David Bowie and move to Berlin in the 1970s — the period in which he recorded The Idiot and Lust for Life — he contrasted the city with his hometown.


“If you could render Detroit today entirely safe and peaceful, and building a big wall around it, and subsidize it with federal dollars, you’d have Berlin in the ‘70s,” he said. Berlin was a “key bone of contention” among Cold War Powers, Pop said — but “an accessible city with a working-class base.”


Pop and Was played “Butt Town,” “Nazi Girlfriend,” “Little Doll,” and “Candy” at the Majestic, with Pop singing (and adding percussion on “Little Doll”),
Fertita on acoustic guitar, and Was playing upright bass. When Pop hit a long, powerful high note in “Candy,” it was a reminder of what a special opportunity Sunday’s performance was for those who came.


Fertita’s appearance Sunday was his first show with Pop since the Post Pop Depression tour, which stopped at the Fox Theatre April 7. The Queens of the Stone Age and Dead Weather member is a Royal Oak native.


With the exception of The Stooges' "Little Doll" — which Pop said was inspired by a strikingly beautiful woman who walked by him in the lobby of the Chelsea Hotel — the songs were drawn from the two Pop solo albums produced by Was: Brick by Brick and Avenue B.


Pop, who's in the midst of revisiting his career on film and in print, speaks fondly of The Stooges. He is the only surviving member of the band’s original lineup.


“They were my first love,” he said. “And you never forget your first love.”