With Axl at the helm, AC/DC brings rock 'n' roll thunder to the Palace 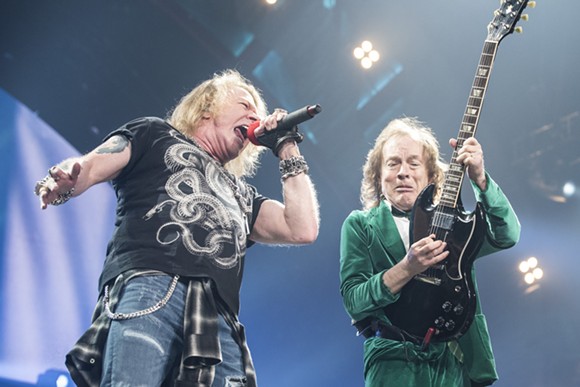 It seemed like three different singers took the stage for AC/DC Friday night at the Palace of Auburn Hills.

And no, that’s not an Axl Rose fat joke.

Rose, who joined the band after Brian Johnson’s hearing issues forced him to stop performing or face permanent deafness, sounded like himself at times. At others, he seemed to channel original AC/DC lead singer Bon Scott. And still other times, he sounded like Johnson.

Paired with the always-impressive talent of guitarist Angus Young and a backing band that remains a strong foundation for the group, AC/DC rocked the Palace at extreme decibels during a 24-song, two-and-a-half-hour set that focused almost exclusively on the band’s biggest hits and fan favorites.

The show — the sixth U.S. date to feature Rose as frontman — is part of the Rock or Bust tour, so, naturally, the show kicked off with the title track to the 2014 album.

After that, Rose greeted the crowd with a “good evening” before diving into “Shoot to Thrill” from the band’s classic Back in Black album.

To watch Rose shimmy around the stage as Young does his classic duck walk toward the center of the stadium floor is an odd sight at first, but both men were their signature selves throughout the show. It took a few songs for AC/DC to really hit their stride, but the fourth song of the evening — “Back in Black” — proved to be an early highlight of the set.

Rose was at his best during the band’s biggest hits, hitting all the right notes and seeming quite comfortable. “Dirty Deeds Done Dirt Cheap,” “Hells Bells” (complete with a huge bell swinging over the band) and “Sin City” were high points. He did stumble a few times along the way, the most notable of which occurred during “Rock 'n' Roll Train,” when he missed a line and had to hustle to a TelePrompTer to catch up with the lyrics.

Through it all, it was clear that Young was the main star of the show, with Rose often standing near the band, watching him along with the rest of his bandmates, seemingly content with just being another dude in the band.

That star shined brightest at the end of the band’s main set, as “Let There Be Rock” featured a lengthy Young guitar solo that saw him head down the runway toward the center of the floor before being raised up toward the rafters as confetti shot throughout the arena. He then ran back toward the main stage, was propelled on top of a walkway above the drum set, and continued the solo before eventually being lowered beneath the structure. A few moments later, he rose up from beneath the stage, devil horns attached and fire behind him, as the band began its encore with "Highway to Hell." 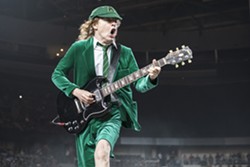 “Riff Raff" led to the final song of the night, “For Those About To Rock (We Salute You)”, with canons firing and all — a fitting tribute if Friday was the last Detroit will ever see of AC/DC.

Rose has now played 18 shows with the band, following a nearly-identical setlist each night, according to Setlist.fm. The tour is scheduled to travel to Buffalo, New York City, and Washington D.C. before wrapping up Sept. 20 in Philadelphia.

Hell Ain’t a Bad Place to Be

Got Some Rock & Roll Thunder

Givin the Dog a Bone

If You Want Blood (You’ve Got It)

You Shook Me All Night Long

Shot Down in Flames

Have a Drink on Me

Let There Be Rock

For Those About to Rock (We Salute You)