I will not miss Swans. The group I play in had a show that night at another venue. So I showed up late to my own show. So be it. There's a price to be paid with everything and I refuse to miss this band.

I’m not one for grandiose statements but here it is: Swans is the best live band in the country.

So if you missed it, you blew it. Now if you’re the type of person that wants to check out the Avett Brothers on the Red Bull Stage at Bonnaroo, then this was probably not a show for you anyways. Those spectacles are all about the viewer, or the event itself, the music is secondary. Swans demand your attention. 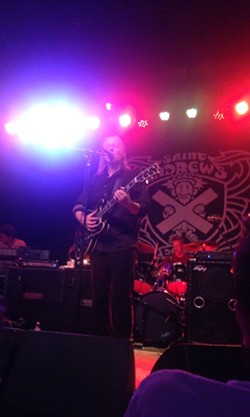 Okkyung Lee opened with her incredible improvised solo cello pieces. They were moving, dramatic and beautiful. She could not contain her displeasure for some of the crowd talking. There was also an issue with her getting feedback from the monitors, but she put those frustrations aside and focused on her pieces and those who watched received it gratefully and she had a long ovation after she was finished.

I cannot believe how many amps they had on stage. They had a wall of amps. I don’t even think there are that many Mesa Boogie cabs at fucking Guitar Center. They infect the whole stage. They intimidate the listener.

Swans wasted no time coming on stage. There was near silence when they came on stage. A few people clapped. It was weird, it was as if people didn’t know how to react.

Swans conversations usually dominate along a single narrative; they are LOUD. Yes, they are loud. Incredibly loud. There is nothing to even compare the intensity of hearing Swans to because there isn’t an example that could explain it justifiably. That is because their strength is the texture of that amassed sound and formulating it into a clear presence. They are not loud just for the sake of being loud (well, maybe a little). The sound is there to create an attentive presence, it's part of the display that Michael Gira and company are trying to create, it is not noise. And what I mean by noise (not trip metal) is that the sound isn’t there to repel you it is there to commit yourself to it. It is one word: DYNAMIC.

Gira, who is the face of Swans, conducted the group like a maestro. He uses his hands, his guitar, like a baton asking the rest of the group to rise and fall. Each movement is equally powerful just by the sheer force of the sound it carries. Gira always looked frustrated by their creation, shaking his head as if the product didn't correlate with his vision. This type of creative atmosphere could be difficult but every member has such a fiery musical presence. Christoph Hahn who plays lap steel sat stage right and moved between chewing gum, bearing his teeth at his instrument like an animal, and combing his hair. He built the tension with each strained second gathering texture as it climbed and climbed. If that wasn't enough guitarist Norman Westburg who was at the opposite side of the stage doubles down on each sound of music being made. He too chews gum nonchalantly, occasionally playing with his goatee that rests somewhere near the middle of his chest. These three men, Westburg, Hahn, and Gira, look to be in their sixties and remind me of men who would stab you at a bar if you looked at them too long. 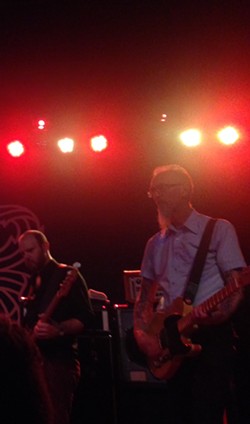 Gira spent most of his time looking at the drummer Phil Puleo, who never stopped beating the drums as hard as he could. The veins in his neck protruded as he gathered himself continuing to move faster and harder with each Gira direction.

It is Gira who gathers this group and just sonically pummels each participant. When not facing the group he would raise his arms like a saint and just allow you to take in this assault that moves between aggression, passivity, violence, and cinema. Often Gira would close his eyes and open them as if he was waking to a dream.

This could be the last Swans tour. Gira made comments about The Glowing Man, their recent album, being their last. And if it is I'm sorry you missed them. Sucker.