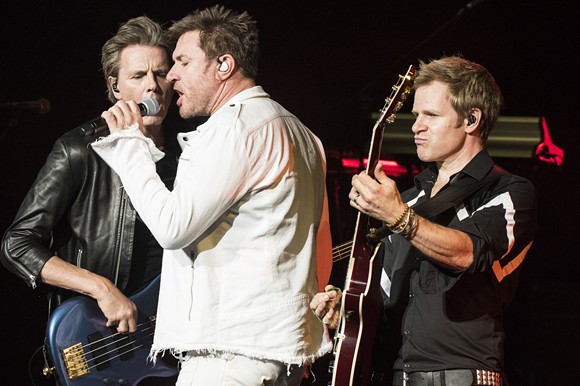 Duran Duran filled the house at DTE Energy Music Theatre on a Monday, and the reason why was evident when the 1980s new wavers came onstage with apropos rolls of thunder and blasts from the fog machine.

Frontman Simon Le Bon, 57, is in incredibly good voice, and the group, coming off the success of last year’s Paper Gods album, puts on a dynamic show. They opened with the title track from that most recent album, with an energetic Le Bon hitting the stage dressed entirely in white.


“This is amazing. This is the most — and noisiest — people I’ve come across in this place,” Le Bon said at one point to the Clarkston crowd, which stayed on its feet throughout the show.


The Paper Gods stage is a simple, but eye-catching affair: bassist John Taylor often played on an elevated platform between the drum kit and keyboards, and the band had light sets and colorful visuals behind them on every track.


“A View to a Kill” came early in the set on the heels of "Hungry Like the Wolf," and the title song to the James Bond film of the same name was introduced with “The 007 Theme” and paired with visuals playing off the iconic Bond gunsight-and-dancing-nude-women theme.


The sultry “Come Undone” saw Le Bon hitting and carrying high, long notes unlike anyone we’ve seen sing live in recent memory, and he did it again and again throughout the night.


Opening act Nile Rodgers returned to the stage to play his smash 1986 collaboration with Duran Duran, “Notorious,” as well as “Pressure Off.”


Taylor’s driving bass was prominent in the loud, clear mix all night, popping wickedly during “Girls on Film.” At the end of the night, Taylor said the group first played the former Pine Knob in 1982: “Thank you for taking that journey with us.”


The late David Bowie was paid tribute twice Monday, with opener Rodgers playing one of the Bowie blockbusters he wrote — “Let’s Dance” — and again with a unique New Wave interpretation of “Space Oddity” from Duran Duran.


Founding keyboardist Nick Rhodes was absent from Monday’s show after returning to London for an “urgent family matter,” according to a statement from the band.


Le Bon asked the audience at DTE to pray for Rhodes — replaced for the time being by MDNR — before “Save a Prayer.” The audience sang along while waving cell phone flashlights at Le Bon’s urging. The show then closed near to the venue’s 11 p.m. curfew with “Rio.”


Duran Duran has enjoyed a career resurgence with new material since their early 2000s reunion and publicity from bassist Taylor’s 2012 autobiography. This summer tour shows a group indelibly connected to a point in the past — the 1980s — that’s continuing to pick up new fans and make themselves relevant in 2016.


Rodgers and Chic, meanwhile, were more co-headliner than opening act, running through disco classics “Everybody Dance,” “I Want Your Love,” “Good Times,” and “Le Freak."


The bassist, producer, and composer also performed songs he’s famous for writing: Diana Ross’ “I’m Coming Out” and “Upside Down,” Bowie’s “Let’s Dance,” Sister Sledge’s “We Are Family,” and Daft Punk’s “Get Lucky.”


Rodgers, 63, who said he feels “like the luckiest man in the world” after surviving cancer, was a pleasure to see and hear — and his pairing on the bill with sometime musical partners Duran Duran was a live testament to his impact on the music business.