Live Review: I saw God last night and his name is Bruce Springsteen 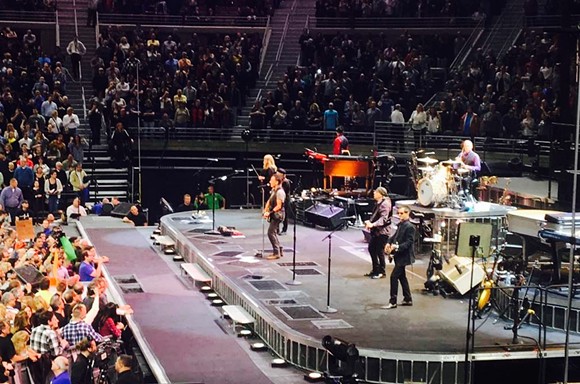 Bruce Springsteen’s coming of age album The River was released in 1980 - long before my existence as a human being was even considered - but the songs and themes of the album still feel relevant and relatable, they don't age — kind of like The Boss himself.

And seeing this legendary artist (and his equally legendary band) perform for the first time, this millennial got a taste of what's been keeping fans coming for more year after year.

2016 marked the 25th anniversary of timeless album, and while it didn’t spawn hits like some of his more popular albums, it seemingly holds a special place in the artist's memory.

When describing it to a packed crowd last night at The Palace, Springsteen said, “This is my coming of age album. I wanted to make an album that was as big as life.”

The first two hours of the three-and-a-half hour show was completely dedicated to The River. Die-hard fans jumped with joy when Springsteen and the band hurled into songs like “Two Hearts,” “The Ties That Bind,” and “Hungry Heart.” Things even got emotional when he played the deep-cut “Independence Day.” The average Springsteen fan may not have known every song - myself included - but that didn’t stop them from dancing and swaying to what the legend had to say.

Not to throw shade, but it was kind of incredible to see how in shape and lively Springsteen and his band was for THE. ENTIRE. NIGHT. That's three hours! Most people my age can't keep in continuous motion, let along perform a medley of timeless tunes, for that amount of time.

This would have been me if I would have played for almost 4 hours to some 14,000 fans.

Drummer Max Weinberg kept the beat steady all night and guitarists Nils Lofgren and crowd favorite Stevie Van Zandt proved why their induction to the Rock n' Roll Hall of Fame in 2014 was deservingly so. There was even a small tribute to the late members of the E Street band, pianist Danny Federici and The Big Man Clarence Clemons (Clemons’ nephew Jake Clemons replaced him when his uncle passed).  From sharing guitar solos and sharing microphones, the E Street band is a family for Bruce, and the crowd was a part of that family, too. (Notably absent was Springsteen’s wife, Patti Scialfa, who normally plays acoustic guitar in the band.)

The real magic happened once The River portion of the show ended. From then on out it was hit after hit. The crowd erupted when they broke into “Badlands” and a fantastic cover of Patti Smith’s “Because The Night” (which Springsteen co-wrote).

Before the encore began, Springsteen addressed the crowd about his recent cancellation of a recent North Carolina show because of law that is regulating transgender people using bathrooms. Bruce caught wind of a similar bill that may be going through Michigan legislation and warned the crowd just how truly awful it is, “because we love playing in Michigan.” He then went into a very fueled and angsty version of “Born in the USA" that reminded me that this country really is great.

That was followed by classics “Born to Run,” “Dancing in the Dark” (where Bruce brought up two excited fans ala Courteney Cox), “Rosalita,” and the song that brought up Detroit rocker Bob Seger to play the tambourine on stage “Tenth Avenue Freeze-Out.” According to another concert-goer, Springsteen started the original “The River Tour” in Ann Arbor in the early 80’s and Seger joined The Boss on stage then as well. Full circle, indeed.

The house lights came back on during the encore, and it was a truly magical moment. Springsteen’s music is so cemented into American rock n’ roll. He is so influential - both musically and politically - that the entire night felt like everyone was seeing Springsteen for the first time.