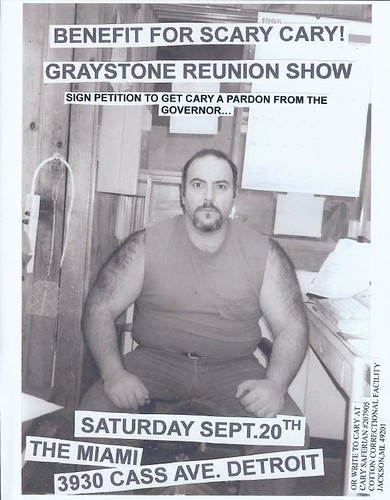 Back in the day, “Scary” Cary Safarian was the tough-talking promoter who took over Graystone Hall after former Necros bassist Corey Rusk and wife left the club to concentrate on his Touch & Go/Quarterstick label. Safarian's run as that venue's manager was rocky and brief, and, by 1988, the Graystone’s days as a music venue were clearly over.

On Feb. 11, 1989, Safarian apparently went off the deep end. Apprehended after an armed robbery, Safarian was hit with two felony firearms charges, one count of armed robbery and one count of assault with intent to commit murder. Now, instead of being known as “Scary Cary,” he’s better known to the Michigan Department of Corrections as Offender Number 207905, with an earliest release date of 2018.

But instead of crushing his spirit, the hard time has brought out Safarian’s creative side. Since being sent to the slammer, the burly former punk has devoted his energies to painting, becoming an accomplished prison artist. And he’s continued to correspond with the outside world over the years.

Now, some local yokels are organizing to ask the governor to grant Safarian, now 52, clemency. Former Graystone punk and Safarian friend Gregory Schmitt, 46, has been making the rounds of Detroit bars, including Jumbo’s and the Old Miami, trying to get people to sign his petition. And the Old Miami’s owners have pitched in to help by hosting a fund-raiser, petition drive and Graystone Hall reunion this Saturday night. Schmitt says he’ll bring some old videos and fanzines, and he hopes to find lots of the old punks who still remember “Scary” in attendance, ready to drink some beer, share stories and watch some old videos from the Graystone.