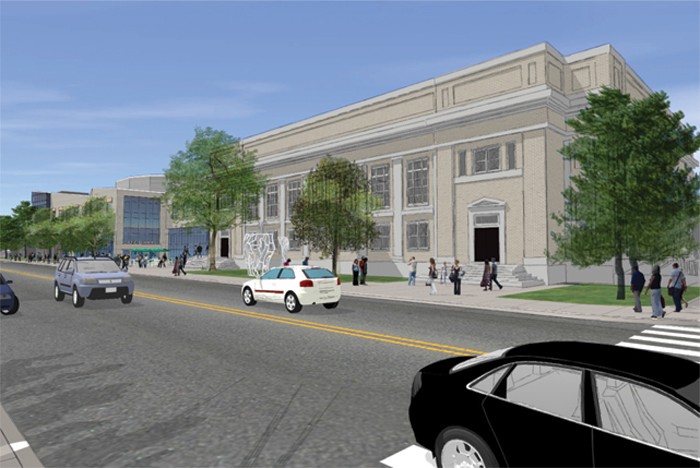 Opened in 1963 as the nation’s first graduate repertory company, Wayne State’s Hilberry Theatre has a reputation for both great theatrical productions and gorgeous architecture. Currently occupying a repurposed church dating back to 1917, theater patrons have enjoyed the Hilberry’s classical Roman style for 50 years. The only problem is WSU’s theater program has far outgrown the space.

“[The Hilberry] is a wonderful historic building and it has served us very well, but it’s just no longer adequate to support technologically intense theatrical productions,” says Matthew Seeger, professor and dean of Wayne State’s College of Fine, Performing & Communication Arts. There are other problems too, endemic of buildings this age. The basement has experienced problems with flooding, and sets and costumes have to be transported to a storage building a block away due to lack of space.

WSU recently announced plans for what it dubs “the Hilberry Gateway project,” a $48.6 million initiative kick-started by a grant from the Kresge Foundation. The final theater complex will combine the existing building with an adjacent 500-seat new theater and attached scenic and costume designing facilities.

The expansion offers much-needed space for the Maggie Allesse Department of Theatre and Dance, which is currently operating out of the Old Main building. “It’s of the best dance programs in the region,” Seeger says. “Making a space that is conducive to their needs is an important part of this project.” In addition to housing the dance department, the church will be converted into a 150-seat space that will have flexibility for films, lectures, and other community events. The downstairs Studio Theatre will continue as an experimental space.

“Theaters have an important impact on the economic impact in the area as the patrons come to the theater and wander around town,” Seeger says. “Theater is an important economic engine. It’s also important in creating a sense of placemaking. There’s a lot of emphasis on creating walkable communities in the Cass Corridor, and we think an active, vibrant theater is part of that.”

Another part of the expansion has to do with trying to shift the Hilberry’s demographic, which has a reputation for classical theater and Shakespeare, to a younger crowd. “That’s true generally of live theater; it’s more of an older audience,” Seeger says. “Theater is something that once you experience it, it’s an amazing and engaging art form. We have some plans to reach out to the younger, hipster clientele, which is everywhere now in the Midtown area.”

Seeger emphasizes that the project is only in the fundraising phase, and the university hasn’t selected an architecture firm yet. But the university has commissioned conceptual renderings. “One of the ideas is to create a glass front to the theater so you can see into the scenic shops and the production facilities as you drive down Forest Avenue,” Seeger says. “This is a concept of a ‘gateway,’ which is how the project is being described. You can actually look in to production. I think that’s very intriguing to people.”

There’s also the issue of the historic David Mackenzie house being located in the footprint of the new proposed theater, a building that has already escaped demolition once in the 1970s when student protesters saved it. The university is planning on moving the existing Mackenzie house to another location. “Actually, moving older homes is not challenging,” he says, noting that the much larger Gem Theatre was moved five blocks in 1997.

Seeger says that the Hilberry is “one of the crown jewels” of Midtown and has been an anchor for the neighborhood for the past 50 years. “We want to provide a facility that will provide our needs for the next 50 years,” he says.