At least it has the look and feel of something that's eyepoppingly great. 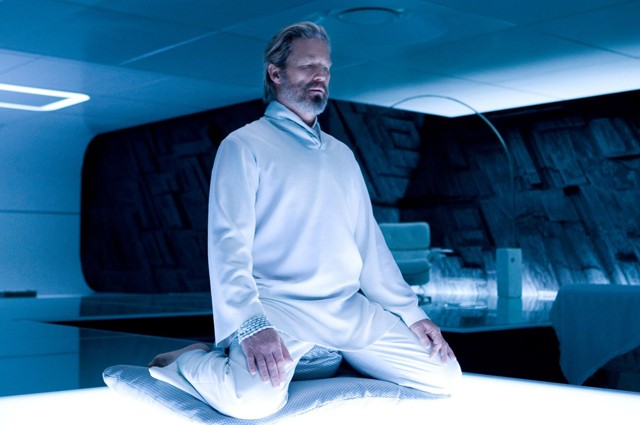 The power of Bridges can't save Tron.

Hey, Disney, here's an idea: If you're going to spend $170 million on a special effects-laden holiday tent pole movie intended to beget sequels and an animated series, you might want to throw a few extra bucks at the screenplay and, you know, hire writers who can actually tell a coherent (or even dramatic) story. Just an idea. No pressure or anything. Oh, and while I have your attention, if the title of your movie is Tron: Legacy, you might also want to make the character of Tron more than just an inconsequential plot prop.

That said, getting Daft Punk to compose your soundtrack was a stroke of genius. Sure, the story's filled with cardboard outlines of characters plodding their way through a series of chase and action scenes that don't add up to anything resembling an original idea, but the pulsating, synth beat and steroidal laser planetarium effects make Tron: Legacy seem like it's much more than it is. Right from its opening ripped-off Christopher Nolan visuals, the movie has the look and feel of something special. Too bad it isn't.

Disney's attempt to reboot its nearly 30-year-old property and turn it into a sci-fi franchise is aesthetically dazzling, emotionally sterile and relentlessly derivative when it comes to anything that involves human beings. Beyond the script's total lack of imagination, lead actor Garrett Hedlund's blandness makes you beg even for the dynamism that is Shia LeBeouf! And, come on, a movie really has to work hard to make Jeff Bridges this uninteresting. Only Michael Sheen brings some life to his role as a Bowie-esque nightclub impresario. His queeny Castor is pure camp.

Director Joseph Kosinski can clearly push pixels with the second-best of them but lacks any feeling for his characters or the art of storytelling. Tron: Legacy is essentially three propulsive action sequences surrounded by endless exposition. And as cool as the effects are, Kosinski's world has no clear rules. This allows the kind of logistical sloppiness that plops antique books and a roasted pig dinner in the digital realm, then caps off a climactic battle with a twist that it not only steals from Iron Man butmakes absolutely no sense (does the Grid even have atmosphere, no less one that operates like Earth's?). Even the realms of Harry Potter and Star Wars established a modicum of internal logic.

Thematically, Tron: Legacy has some interesting ideas — the imperfection of perfection, how identity can be corrupted — but they're faint echoes in a movie far too in love with its set designs and 3-D compositions.

And, yes, wow, the blacklit landscape of translucent towers, neon lines and multi-planed arenas will send fanboys into convulsions of joy — especially when the 3D is blown up to IMAX proportions. Taking the design elements of Steven Lisberger's cult classic and updating them with state-of-the-art filmmaking, Tron: Legacy has fashioned a malevolently gorgeous world that feels as ahead of its time as the original. Only the pixelated performance of the film's nemesis CLU, a computerized re-creation of Bridges at 34, falls short. Dead-eyed and weirdly plasticine, the digital gimmick might have worked if Kosinski had confined Bridge's simulacrum to the world of the Grid, thus heightening the real from the fabricated. But he uses the effect in flashback scenes, undermining his intended goal.

Tron: Legacy is a soulless mash-up of the Star Wars prequels, Speed Racer and The Matrix. Which means two out of three of its inspirations are woefully misbegotten. Worse, there's no getting around the fact the movie feels like a high-priced product, setting us up for more yet more to-be-released Tron products. Unconvinced? Ask Cillian Murphy why he's introduced at the beginning the movie, never to return after the opening. Or wait for the inevitable sequel. I'll bet you your identity disc he's the next villain.