Two young women in hijabs pose underneath a photo of a girl with a neon sign that says eib glowing across her face. The Arabic word doesn’t translate exactly, but the closest English counterpart is “shame.” Techno music pumps steadily in the background as the girl in the photo sits behind the loss of innocence that’s been imposed upon her. The two youth, however, are anything but ashamed as they smile and snap pictures in front of the portrait.

The photograph is part of To Make is To Stay, a new exhibition in Detroit featuring over 70 pieces of work from six Arab artists. To see them all, you’ll have to visit two vastly different Detroit art spaces — Spot Lite, an eastside record shop/co-working space hybrid with a techno dance floor, and Galerie Camille in Midtown. It's on view until March 19.

Walking through the exhibit within Galerie Camille’s white walls feels completely different than sipping a cup of coffee at Spot Lite as the photos seemingly watch you from their own respective realities. Viewing the exhibit at midnight on the dance floor after a couple of drinks is another vibe entirely.

And that’s exactly the point. As you move between the two venues, you experience the exhibit as a different version of yourself in each setting where the atmosphere changes your behavior and perception. It's a subtle nod to code-switching and cross-cultural identities. 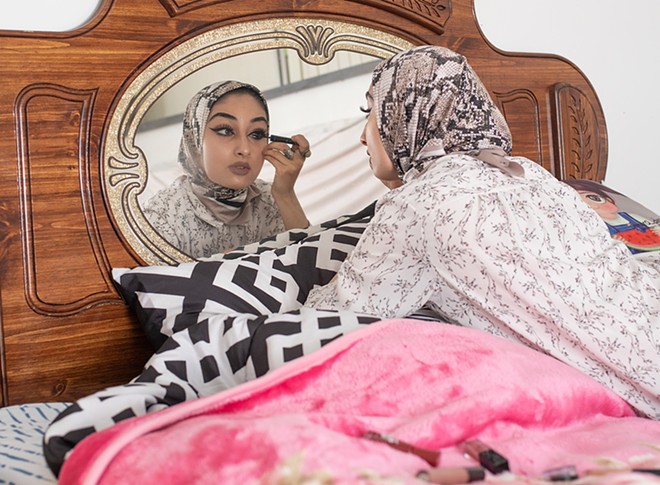 “The idea is that by making art we are staying connected to the places we are from,” co-curator of the exhibit Nour Ballout tells Metro Times. “I want the audience to move through time and space and see the work in two different places in order to replicate the experience of living in diaspora. The work is physically divided just as the artists are divided between countries of origin and the countries they inhabit in diaspora.”

Ballout is a Detroit-based interdisciplinary artist who was born in Beirut. They’re also the creator of Habibi House, a community and art residency space.

The neon glow of “Eib” can be seen at Spot Lite next to a wall of records. If you don’t speak Arabic the significance of the word may be lost on you, but that’s the beauty in stepping into a culture that’s different than your own (respectfully) — it presents a chance to learn something.

This piece comes from Los Angeles-based artist Yasmine Nasser Diaz who did a residency at Dearborn’s Arab American National Museum (where her installation soft powers is still on display). This isn't the first time "Eib" has been shown in metro Detroit either — it was featured at Habibi House back in 2019 as part of Diaz's "Dirty Laundry" installation.

Diaz tells Metro Times the word eib is used as a tool for social conditioning and can make young girls feel ashamed of their body at an age when they shouldn’t be sexualized. The girl in the photo is Diaz when she was about six or seven years old.

“It’s one of those words that’s so ubiquitous and said so many times. I remember being told eib while sitting on the floor with my legs positioned a certain way," she explains. "I grew up in a Yemini immigrant community in Chicago and the gender roles were very clearly defined in terms of how you should be as a boy or girl and what your role was... It’s a damaging thing to make a child feel ashamed of their body at that age.”

To Make is To Stay is part of a larger series called A Real Arab Blueprint (A.R.A.B.) which was a 2019 Knight Arts Challenge winner. This is just one of several installments in the year-long project co-curated by Ballout and Spot Lite owner Roula David, who is a first-generation immigrant from Jordan. Previous shows in the series focused on music, spoken word, film, and media while To Make is To Stay highlights visual art (mostly photography). Neon patterns repeating in a matrix and the vulnerability of the human body photographed with loving-kindness are displayed at Galerie Camille. Meanwhile, at Spot Lite, two women hang out in a bar with their faces obscured by a cloud of shisha smoke as a group of men wearing keffiyehs crack jokes around a table in a nearby photograph.

“It’s interesting because that photo really breaks so many stereotypes of men dressed that way,” David says of the previously mentioned piece by Farah Al Qasimi. “They’re smiling and you can see the joy on their faces like they’re about to pull a prank on their wives or something. For me, it just seems so normal, but for non-Arabs, it seems surprising.”

While the cultural influences are clearly present, to simply call To Make is To Stay an exhibition of Arab art would, indeed, be a shame. Instead of pigeonholing these talented people as “Arab artists,” think of them instead as just “artists” — creatives who possess as much skill and attention to detail as any other artist, Arab or not.

“The six artists in this show share Arab identities and while many of the works display specific cultural references, they are not necessarily about being Arab,” Diaz says. “I would love for people to walk away from this show with a sense of connectivity and feeling of expansiveness that is revealed in the stories these works tell.”

Whether you experience To Make is To Stay in the traditional gallery setting or at the bar, the work sits as an invitation to meditate on the ways in which our environment, culture, and the desire to be truly seen shape us all.

“I’m interested in building relationships across communities by saying ‘this is who I am, this is what I come from, and I’m inviting you to know me,'” Ballout says. “The undertone of the work is creating a place where we can all experience radical joy. It’s a place of connection where we can build from by having a good time and seeing each other as human.”