We're all trying to find the guy who did this and give him a spanking! 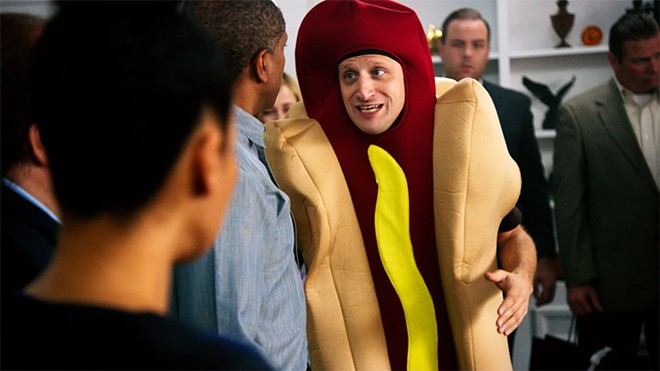 Netflix
A still from Tim Robinson’s iconic hot dog sketch on I Think You Should Leave.

Robinson's wacky comedy show I Think You Should Leave was renewed for a third season at Netflix, according to Variety. Richardson, a collaborator on the show, confirmed the news to the publication.

"I'm not sure when they’ll start filming," Richardson said. "But there are funny sketches coming already, I can tell you that much."

Robinson and Richardson met at Detroit's former Second City comedy club, and soon became good friends. Robinson went on to Veep. But the two never forgot their Michigan roots, partnering for Comedy Central's TV series Detroiters, which was shot here and ran in 2017 and 2018. The show starred Robinson and Richardson as admen working Detroit's advertising industry, with episodes loaded with so many local references and cameos that it inspired Detroit vs. Detroiters, a podcast that aimed to keep track of them all.

The two joined forces again for I Think You Should Leave, which aired in 2019 and 2021 and had a more surreal, sketch-style brand humor.

The two comedians were the subject of a 2018 Metro Times cover story.

Leyland "Lee" DeVito grew up in the suburbs of Detroit, where he read Metro Times religiously due to teenaged-induced boredom. He became a contributing writer for Metro Times in 2009, and Editor in Chief in 2016. In addition to writing, he also supplies occasional illustrations. His writing has been published...
Read More about Lee DeVito
Scroll to read more Television articles