Via Google Maps
On Monday, Detroiters debated proposed regulations to the city's burgeoning medicinal marijuana scene. According to the Detroit Free Press, some citizens are concerned that there is not enough regulation for the estimated 150 or so dispensaries operating in the city.

Others said the industry, which was approved on a state level by voters in 2008, was damaging Detroit's reputation. One Detroiter said she was concerned that the abundance of dispensaries was turning the city into "a laughing joke."

But here's what is no laughing matter: Legalized pot is a big business. In January 2014, Colorado became the first state to allow recreational sales of cannabis. So far in 2015, the business has brought in nearly $86.7 million in revenue.

That said, we do have to admire the sense of humor that goes into branding and advertising what is essentially a new frontier in Detroit.

Earlier this month, Loveland Technologies released "Weed in the D," an attempt to document the city's dispensaries. As the report notes, many dispensaries operate in a clandestine fashion to avoid unwanted attention. But other businesses go all out with some creative signs and names. Here are some of our favorites:

Loveland Technologies
Detroit Grass Station (2930 E Grand Blvd.)
(There are multiple Grass Stations in Detroit, but this one gets bonus points for being in an actual former gas station.) 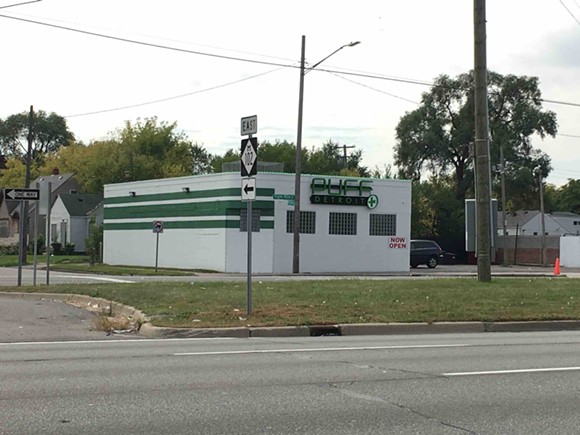