It seems like there's no better person to revive the Outer Limits Lounge – a dive bar at the border of northeast Hamtramck and Detroit – than John Szymanski, aka Johnny Hentch.

As the organist/bassist for The Hentchmen, The Paybacks, and SSM tells it, he has long held a sweet spot in his heart for the "ratty corner bar." It sits just down the street from his family's house, which eventually became the "infamous "Hentch House" party den in the 90s and 00s. Though it never hosted many shows, The Hentchmen played Outer Limits on Hentch's birthday several times, and it was just the kind of low key/dive-y/weird bar with $1.50 drafts that people in and around Hamtramck love so much.

But it closed down in 2010 and sat vacant until Hentch fulfilled his destiny by purchasing the building in 2012 and making plans to eventually fully open it. Over the last few years, he and wife Kelly Jean Caldwell (Wiccans, Saturday Looks Good to Me) used The Outer Limits for get-togethers, band rehearsals, and they even got married in what functioned as their one-of-a-kind club house on Caniff.

It was also the best spot in town to drink into the wee hours, but the city of Detroit eventually put a stop to that. Since then, Hentch and Caldwell slowly began planning and putting together the proper licensing to reopen. In its next era – which starts on Nov. 4 with a grand opening celebration – the Outer Limits Lounge will go legit.

Beyond that, Hentch and Caldwell also turned the Outer Limits into a makeshift recording studio that captures the right sound for the bands rehearsing there, like The Cheetahs. 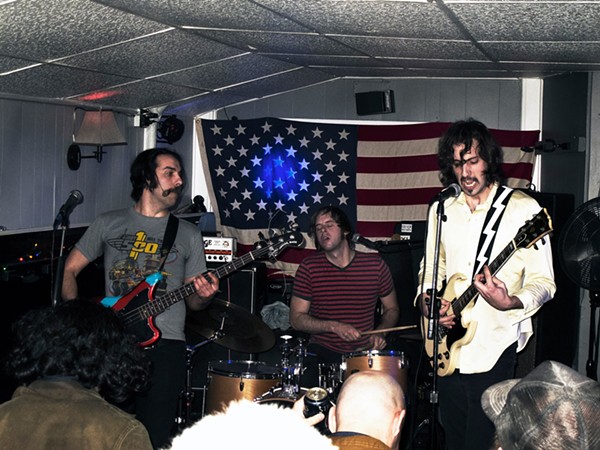 Photo by Steve Shaw
The Cheetahs
Hentch notes that he never recorded a band prior to The Cheetahs, but "with the help and the youthful ingenuity of the Cheetah boys, the results were greasier and greater than anyone could have hoped!"

"It was a good space for rehearsing and all along we were making demos here," Hentch tells Metro Times. "I didn't know if The Cheetahs recording was going to be good or not, but everyone loved it so I was like, 'Shit, let's put it out!'"

That led to the expansion of the Outer Limits' other extension – Outer Limits Records. The label first released The Kelly Jean Caldwell Band's "Downriver" LP in late 2016 and the couple initially intended for it to be a home for their projects only.

But they couldn't resist presenting The Cheetahs new LP, and OLR now has in the works three releases for the coming months.

Its third is the long-awaited LP by Caldwell's other group, The Wiccans. In Bad Habit you'll find the electrical incarnation of the band "weaving the ethereal harmonies and pagan balladry they’re known for, amid the stoned shreddery." Kelly Jean Caldwell/Courtesy photo
And around the holidays OLR will release The Hentchmen's 25th anniversary record. It's enough to make anyone who was around to see them in Detroit's 90's garage rock heyday feel old, but the group still plays with the energy and a formula that keeps it fresh even decades later.

"It's pretty wild. If you look back it seems like there's different lifetimes in there," Hentch says of playing with the band for 25 years. "There's the person I was in the 90s, then we were real serious for a while, then we didn't like it all for a while, and now we eased into this thing where we play once every six months or year."
Though the Outer Limits is not yet open, the celebration starts this weekend at PLAV Post #1o in Hamtramck with The Cheetahs record release party. They're supported by Sugarcoats and Mexican Knives. Find all the details here.

Stay tuned for more details on the bar's official opening.