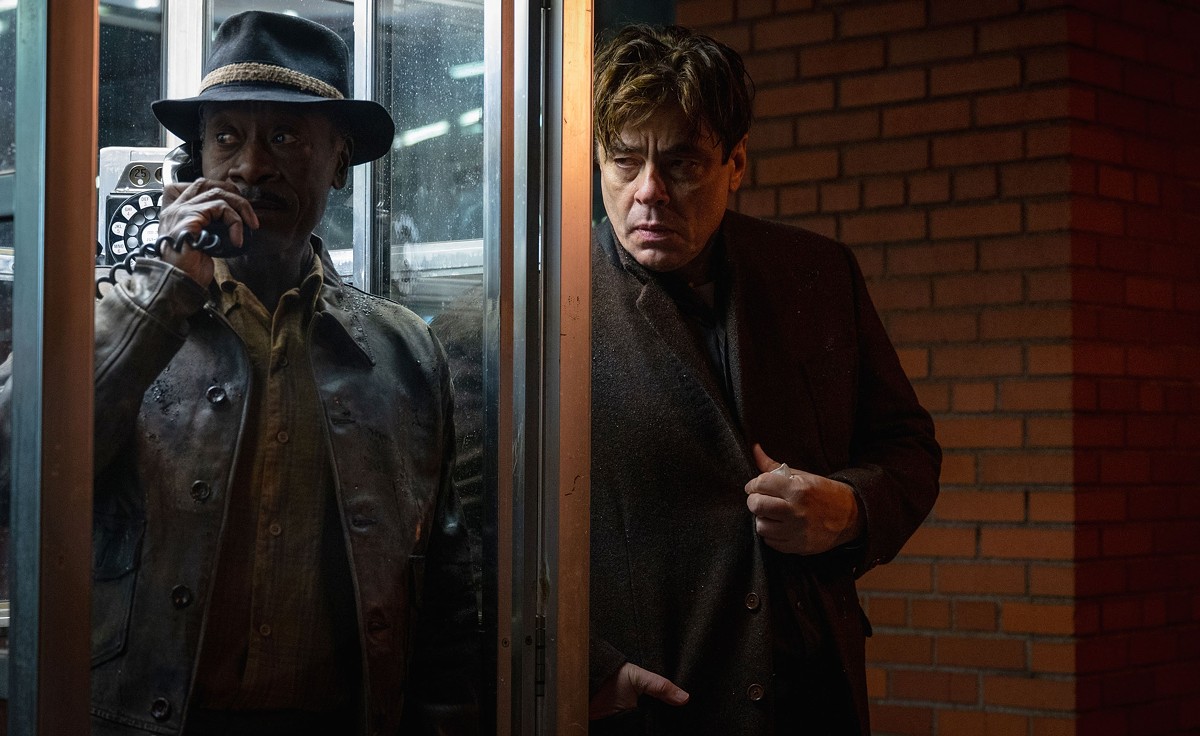 No Sudden Move unfolds as a heist film in a version of 1954 Detroit that feels both bruised and familiar — and not simply because it was shot here last fall. Making the most of the too-few architectural spaces that survived from the film's period, it does so without fetishizing Detroit's opulence at mid-century (as residents and visitors so often do). Shuttered factories and weatherbeaten storefronts are visible as they are today, and production designer Hannah Beachler's managed to make the story feel of its time without dressing up the interiors overmuch. From start to finish, No Sudden Move's environment of streets, homes, and alleyways spanning the metro area manages to feel credible and lived-in largely because of this. Working from an attention to the realities that endure here instead of pretending to remember some phantom set of ones long gone, No Sudden Move lets its creative team map not just Detroit's landscape and its history but the tensions still radiating from its core.

As shaped by Steven Soderbergh's hand in directing, shooting, and cutting together (as in past works like his Ocean's trilogy, Contagion, and Che, he covers the latter duties under pseudonyms), Move is nothing if not tense. Shot and written in a decidedly modern style (limited palettes, tilted camera angles, and rapid cuts across low-lit shots), Soderbergh applies his practiced hand here with an easy sense of flourish. Working from a clever, caustically funny, and self-aware script by Ed Solomon, No Sudden Move glides along like a skater on a rail; bumps are felt, a sense of precarity persists unforgotten, but its momentum, poise, and balance are maintained.

This air of practiced ease stems as much from Move's cast as anything else. With Don Cheadle playing Curtis Goynes, a worn and largely independent streetwise gangster with few bridges left to burn in town, his leading performance shepherds Move nearly as much as Soderbergh does. Delivering lines that feel charred by tobacco and a life spent both living and witnessing far too much, Cheadle imbues his speech here with an unfailing — and underutilized — verbal and tonal agility that frames the film loosely within the confines of his wary, outturned gaze. Thrown a bone at the movie's start — a "babysitting" job monitoring a nuclear family of hostages while their patriarch (David Harbour) retrieves a document from a safe at his automotive job — Goynes is thrown in quickly with a stranger, fellow gangster Ronald Russo (Benicio del Toro), who scans younger, laconic, and a bit smug. Finishing the trifecta is Kieran Culkin of Succession's bratty rake, who's spearheading the document retrieval piece of the job. It's not spoiling much to say the heist doesn't proceed as planned, sending the film careening around Detroit locations, with its leads bumping heads with a dizzyingly large and accomplished cast.

In many cases, this would be a bad sign. Ensembles tend to suggest that a film is over-moneyed and thus likely to be over-touched by the studio's powers-that-be. But Soderbergh's an exception, having gradually built up a friendly stable of actors over years of collaboration since his Palme-snatching debut in 1989 while striving always to keep his productions quick, cheap, and lean — the better to make many of them. At present, he's one of the few directors in Hollywood able to work quickly and consistently enough to make his films easy to commit to, shooting efficiently enough to keep potentially nagging higher-ups off his back, all while actually providing roles that give performers something substantial to chew on. And in Move's case, it shows — Cheadle's joined by a gang of true experts. Ray Liotta, Brendan Fraser, Amy Seimetz, and Julia Fox as Russo's mistress all feature — each, to my mind, in roles impeccably cast and played. And just a few among many.

Freed by Soderbergh and Solomon's approach to the period, which seems more invested in an evocation of how things might feel than an overt expression or accurate encapsulation of the film's particular time, these actors are free to cut loose with a range of styles and gestures that draw on both past and present. From Seimetz's comedic timing under duress as a housewife taken hostage, to Liotta's tempestuous performance as an irascible mob leader, the performers seem refreshingly unburdened by whatever we might take now to be the manners of Move's time. The result, as underlined by the film's at times distracting use of a fisheye lens, is a world un-stuck from both today's "realist" formal and actorly conventions and nostalgia of virtually any kind. Within the familiar structure of a heist film, Soderbergh and his collaborators are free to experiment in their technical and formal gestures, working toward a shared vision of a place and culture more than of a time.

Driven not by any notion of innocence or interpersonal idealism but instead by a widespread presumption of guilt on the part of both entities and individuals, Move uses its period as a mirror of what should feel to most like a fallen present we inhabit, creating a disarming space in which to explore feelings of entrapment, alienation, grievance, and unease — all with an air of biting, existential humor. In moments of tension or imminent violence, Soderbergh's characters often become split from one another in his editing, isolated within their own frames — and at times, their own acting styles, a dynamic mirrored often in the film's moments of comedy. In Move's view of 1954, even married couples and lovers bear their troubles alone, and when the film's leads embark on a repeated series of home invasions to various ends — casual acts of trespass on the sacred temples of mid-century life — the lives they're interrupting prove anything but pristine.

But if the film's characters are guilty, illicit strivers, they aren't so in a vacuum; they're victims — and often perpetuators — of ugly circumstance, as well. In a movie that grants careful attention to currents of money, urban development, race, and power, hewing close to the perspective of characters on the fringes not only of acceptable society but of organized crime, Soderbergh suggests that everything we are is contingent on our context, weaving a cast of rich characters and personalities, yes — but not of potent, self-determining individuals, whatever they might wish or think. In a world, or a city, like this — there's little those on the margins can do but scramble. And it's this — call it what you want, whether it's hustle, or struggle, or drive — but it's this great mess that fuels the country as a whole.