The legacy of the Detroit Poets 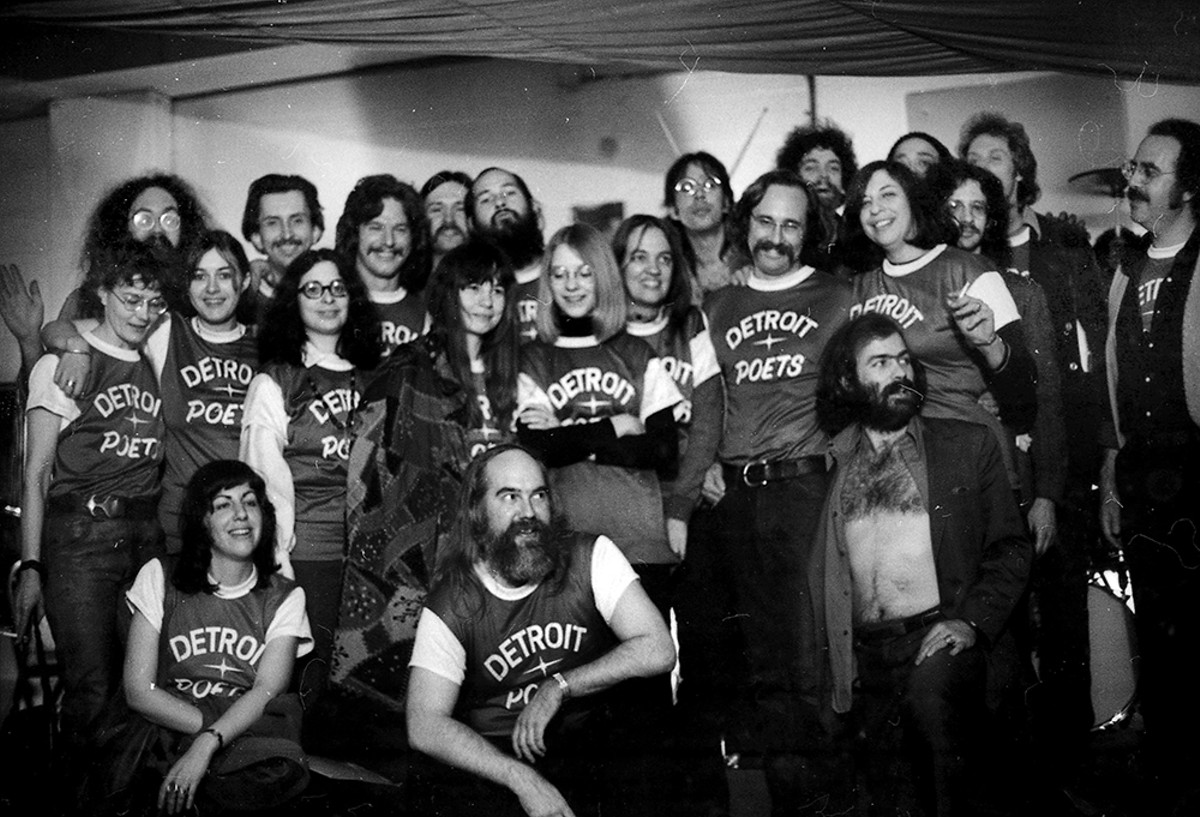 Inside (poet) baseball (jerseys): This group photo of the Detroit Poets was displayed in the 1980 Detroit Institute of Arts Show “Kick Out the Jams: Detroit’s Cass Corridor 1963-1977.” Leni Sinclair

The short story, best as I can tell, is this: On April 12, 1974, Leni Sinclair photographed an amazing lineup of Cass Corridor poets wearing Detroit Poets baseball jerseys that poet Donna Brook had made for a reading. In the photo, three rows of poets and poets' people smile and laugh, some looking at the camera, many are looking away, laughing and joking. It's not an orderly, at-attention team portrait like you see in school yearbooks and trophy cases. Most of the men have facial hair. They're in jeans with heavy belt buckles, some have cigarettes, people have their arms slung around each other. Artist Ann Mikolowski is smiling and looking off to the side in the middle of the group, with her thick, dark bangs and long hair, a long patchwork jacket over one of her shoulders. They're resisting the rules of orderly lines and doing their own things, just as poets are supposed to do.

In the decades since, some of these poets have stayed in the area, others have moved on, to other cities or the great beyond. The shirts themselves have become a sort of mythical object of Cass Corridor cool. There have been remakes. Another round of jerseys was made by Jackie Feigenson (of the Faygo pop family, who ran Feigenson Gallery in the Fisher Building) for the Just Artists and Poets baseball games in the 1980s.

The original bright red shirts, with white ringer collars, cap, sleeves, and writing have worked their way into works of art. There's at least one jersey that's still in circulation showing up at the occasional reading and event even now. It took awhile to figure out the details, so I'll tell you what I heard. If you know more or different, let us hear it in the comments. Even though spring is here, it's not like we'll be busy watching baseball for a while.

Ken Mikolowski's original Detroit Poets shirt still shows up at readings and events here and there, the wearers vary by event. Mikolowski himself wore it at a reading for his Wayne State University Press book That That a couple of years ago. John Sinclair confirmed he was a proud shirt owner. In Leni Sinclair's photograph, he can be seen in the back left corner, with his hand up in a wave and his granny glasses gleaming, framed by his cloud of long dark hair and mustache. The book 48222: A Detroit Book of Poetry, published by Detroit River Press in 1979, has a line drawing of an artist's workspace by Betsy Hansell. That features one of the shirts, actually two sights of it, in reflections in the artist's mirrors.

Going through Jim Gustafson's papers uncovered images of him wearing his in Bolinas, when he was roommates with poet and Basketball Diaries author Jim Carroll. Gustafson even wrote about his. In a draft of a poem that uses articles of clothing to discuss life periods, Gustafson, who died in 1996, wrote:

I wonder what I will remember

And will that memory be

as vibrant as the

my mother bought at a rummage sale,

or as bright as the Detroit Poets t-shirt

I once wore so proudly.

Gustafson even wore his shirt in one of painter Ann Mikolowski's two miniature portraits of him (whereabouts are unknown for Ann Mikolowski's other palm-sized portrait of Gustafson, one of the poet eating spaghetti).

Mikolowski credited poet Donna Brook for the shirts, which she confirmed via email.

"It's hardly War and Peace," Brook wrote from Brooklyn, where, she says, "they only care about Brooklyn." Brook said she had a team's worth of red baseball jerseys made at a sports equipment shop near her place in Highland Park around 1970. She seemed amused that I was asking about it at all. Another goose chase inspired by Ken Mikolowski, who has a way of telling stories that can make people want to find out more.

Mikolowski remembered the shirts were given out at a reading when poet Ed Dorn came in to visit from the University of Colorado, where he was teaching. There was discussion of who got which number, and then there was a long reading where everyone had a chance at the mic. Mikolowski said, "16 some poets read, every one of them ignoring the 10-minute maximum." And every poet got a T-shirt."

Donna Brook remembered hearing back then that there'd even been a photograph of poets in the jerseys that was blown up on the wall of the DIA's "Kick Out the Jams" show in 1980, but she never saw it. She had already left the city and moved to New York. The Dorn reading must have been the event where the photo was taken, maybe exhibit records could confirm. Time to ask around, dig around, and head to the archives!

The show, "Kick Out the Jams: Detroit's Cass Corridor 1963-1977," took its title from the first four of five words of the refrain of the MC5 song of the same name. It focused on Detroit artists and was put on at the Detroit Institute of Arts in 1980, one of a series of Michigan-centric exhibits in that time period. The exhibit catalog has great photographs, including some by Carl Schurer and a few by Leni Sinclair, but the Detroit Poets photo is not reprinted in the book.

Maria Ketcham and James Hanks, archivists at the DIA, were able to pull up the black-and-white installation shots of the exhibit. They said the Kick Out the Jams show is one of the most-requested topics by researchers in the reading room (along with the Rivera mural, Drag Mass, and the "For Modern Living Exhibition" of 1949). The Kick Out the Jams photos confirmed a large version of the photo was on the wall! This photograph of 21 poets or honorary Detroit Poets teammates — and one unidentified shirtless man at bottom right — had been enlarged and displayed on the wall in one of the rooms in the Kick Out the Jams show. The news that had traveled to Brooklyn in 1980 was true. Donna Brook had heard right.

The museum's archival photos show the photograph in a room of the DIA exhibit that featured other documentary photographs on the wall, plus three wall-mounted and one free-standing table display that featured other exhibit photos and poetry. It's hard to tell scale for the photo, but it looks like it was at least poster-sized. It could've been three-feet wide. It's hard to make out the faces in my iPhone photo of this photographic print of a picture on a wall in 1980. The wall label wasn't legible, and we didn't find any records of the exhibit's labels. This was a huge discovery, though. The picture had for sure existed and been displayed. Maybe it could be found again by a laissez-faire part-time, on-again-off-again poetry fan and amateur researcher like yours truly.

Ken Mikolowski remembered this scene at the Willis Gallery. Photographer Carl Schurer recalled catching a lineup of the Detroit Poets at the Strada Gallery, not the Willis. He took photos that night, too, and said, "According to my contact sheet, the date was April 12, 1974." But Schurer wasn't satisfied with the quality of his photos, so he never printed them. When I talked to Leni Sinclair, she said she thought it had happened in the basement of the Detroit Artists Workshop. She would look through her contact sheets to see if she photographed the event, too. I was used to dead ends.

She confirmed the date via email: "On the back of my proof sheet it says: Artists' Workshop Reunion - April 12, 1974."

In the photograph, 22 smiling and laughing figures take up most of the frame. An incomplete who's who: The back row includes John Sinclair, Jim Semark, Ric London, George Tysh, Ken Mikolowski, and others. The middle row shows Daphne Cox, Chris Tysh, Ann Mikolowski, Glen Mannisto, Robin Eichele, and Henrietta Epstein. In the bottom row: Donna Brook, Bill Cox, and an unknown man without a shirt.

You can't make out much of the background. A ways behind them is a white wall. Behind someone's head, it looks like a pair of TV antennae. To the back right, a cymbal seems to stick out of a drum kit. Is there a stage in that corner? There's a drop ceiling — it might be fabric, like a parachute silk. Maybe it was in the DAW basement?

Leni Sinclair also shared that "the guy in front with the naked torso was not one of us or a poet, and nobody knew how he got in that group photo or how to get him out of there."