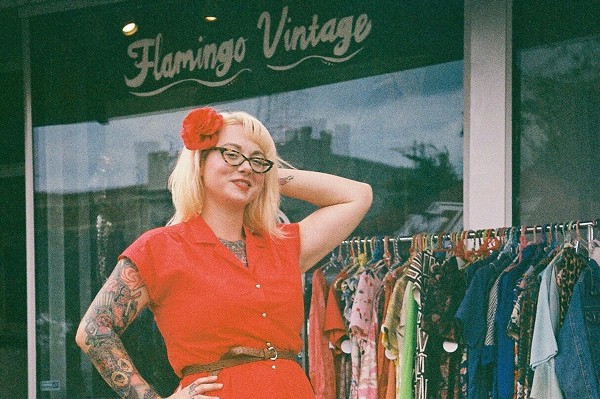 It took vintage fanatic Nikki Neuzil and her husband, a Detroit native, three years to relocate from Austin and nearly a year and a half to scope out the perfect storefront. Eventually, she landed on a hundred-year-old space with a rich retail past in Southwest Detroit.

"When I lived in Austin, I dressed in primarily vintage and spent a lot of time in the vintage stores there. One day my collection got so big that I decided to open a store a few hours away," Neuzil says. "Five years later, I found myself in Southwest Detroit. And when I found this building I couldn't turn it down." Courtesy photo
Flamingo Vintage, 5449 W Vernor Hwy in Southwest Detroit
Flamingo Vintage opened its doors last week in the building which once belonged to menswear retailer Hector's. According to Neuzil, the restoration was meticulously done and was done so by studying a collection of photos of the shop's previous life. The building's new owner utilized everything from the large wooden built-in displays as well as the male dress forms left behind.

Located at 5449 W. Vernor Hwy., Flamingo Vintage offers a mix of men's and women's clothing and accessories from the 1920s through the '80s as well as furniture and mid-century home decor. Neuzil says that most pieces range from $20-$40, while jewelry items start at $8.

How does Austin's vintage style compare to Detroit's aesthetic? Neuzil gives the point to Detroit.

"I think personally that the style here is cooler because we have a Motown background and an appreciation for that 1940's-1960's heyday."

Flamingo Vintage will host its grand opening event on Tuesday, Feb. 12 and will offer food, drinks, as well as DJ's and additional vendors.