Clad in hot pants, leather jackets, and black cowboy boots, twin sisters Alejandra and Zoë Villegas wear the uniform of punk rock witches. They say their abilities were awakened when they were given their first tarot deck at the age of 12. "I don't really remember a period of time when we didn't know how to read tarot," Alejandra says, now 30 years old.

The Villegas sisters spent their teen years in the DIY music scene, exercising their unique calling. They say they used their tarot skills for fundraising, including raising money for legal defense funds for compatriots in need. Though they both wrestled with their values and moral code when deciding to parlay their gift into a sustainable living through their pop-up spiritual service GeminEye, Zoë reminds us that tarot is a currency of its own.

"We see it as being able to provide a resource that is kind of a spiritual form of support and also to be able to take anything that we make to provide for our immediate community as well," she says.

Together, the sisters Villegas are the antithesis of Gwyneth Paltrow's commodified brand of pseudo-spirituality, and the magic they possess has no interest in the throwaway occult as seen on the racks and shelves of your local mall's Urban Outfitters.

"One of the most painful things for me to witness is when spirituality becomes an emotional crutch," Alejandra says. "Like leaning on this constant white light, inspirational quote, or a crystal for every need — that's challenging for me to watch because I view it as disempowering rather than empowering. It's the constant chasm between faith and reason."

Though some seek GeminEye's guidance, Alejandra reminds us that tarot does not often serve those who are ill-equipped to handle the truth.

"It's not really our job to sugarcoat things," Alejandra says. "I look at the tarot as being reflective of where we are."

Zoë adds, "Regardless of whether somebody's ready to hear the truth or not, we feel like it's our goal and what we're there to do is to just say things as we see them. I think that if you're reaching for some honest answers, it's important to be open to that and not everybody is."

With this in mind, we asked the sisters to do a reading for the city of Detroit. Although they admit they've never done a reading on such a large scale, they're up for the challenge. The future of the city is very personal for GeminEye as the Villegas family, who identify as Mexican-Americans, have been in Detroit for 100 years and were among the first to be illegally deported in the 1920s. (The sisters are eager to point out that their grandfather is actually depicted in the famous Diego Rivera's "Detroit Industry" frescoes in the heart of the Detroit Institute of Arts, just steps away from the Kresge Court where we decide to conduct the reading.)

When it comes to addressing what's in the cards for Detroit, Zoë says it has a lot to do with confronting Detroit's tale of two cities. "Half of the city is living with their water shut off and then we have this contested kind of definition of growth and progress, which seems to only include really upper-middle-class or wealthy people who come into the city and really don't need to rely on the tax base or the infrastructure," Zoë says.

She continues, "Every conversation is very loaded — all of our interactions, everything from the bike lanes to the Kid Rock concerts and racial relations which are extremely tense. We're reverting to Jim Crow within Detroit public schools and people are living with a quality of life that is unheard of and unparalleled in any other American city."

For Detroit's reading, Alejandra and Zoë pull cards for a Celtic Cross spread, which is commonly used for situations that require a bit more spiritual unpacking. Here's what they found: 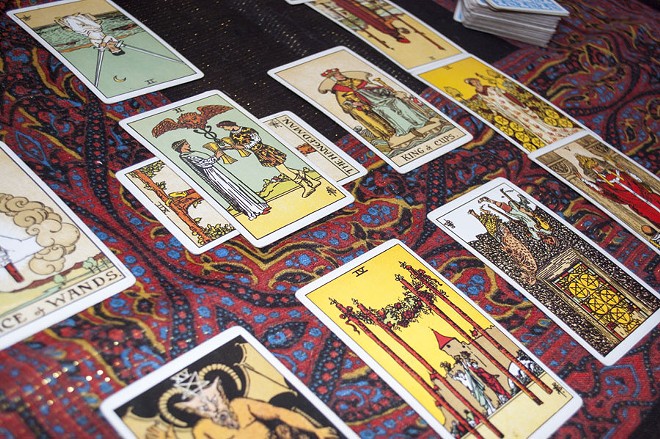 Zoë: We're suspended between these two realities, these two cities, we articulated earlier. I see the Hanged Man as a need for practical answers to a spiritual question and figuring out how we reconcile these differences.

Alejandra: Two of Cups is really symbolic of the type of love that grows after the idyllic phase of the physical and sexual connection. It involves, what I would say, in the context of the question surrounding truth, loving something in spite of its flaws. There is actual growth and development that can come from that. Rather than denial and delusion or reactionary responses to the state of current affairs.

Zoë: The only way for growth or progress is through the actual connection to honesty through communication.

Ace of Wands and Two of Swords (reversed)

Alejandra: The Ace of Wands that follows represents a revolution in consciousness. It feels like there are good fortune and blessings that follow that, but then the Two of Swords reversed...

Zoë: The Two of Swords reversed is an inability to make a decision and I feel that this is a very loaded card for this situation because the woman is blindfolded and she has these two swords drawn to her chest, standing against a rocky tide. It's this inability to position ourselves to make an important change and understand our strategy and role in the war. Is there a war going on? And how can we be efficient and strategize, recognize our own place in the scheme of things when we are blindfolded?

The King of Cups

Alejandra: This feels like an intercession. Like somebody intercedes on behalf or oversight of some of what is transpiring politically in Detroit. It feels like maybe a more empathetic individual who is able to step in. I'm really hoping this is a new director of the water board.

The Devil and Four of Wands

Zoë: Absolutely. I think the King of Cups, because we're looking at the basis of the tarot as reflecting some things that are metaphorical and some things are very straightforward, I am seeing this as being water-related, when we're in the process of dealing with people's literal access to water and life force is being denied. The Devil and Four of Wands... this partnership, I don't like it.

Alejandra: Do you have names to name?

Zoë: I don't have any immediate names to name in regard to this alliance. Do you?

Alejandra: I do but I don't want to say.

Zoë: This is financial strife and the spiritual strife that comes with it, and to me, that reality in Detroit is so poignant and so real for people who are struggling to be able to access the basic resources that sustain their lives.

The Hierophant and Nine of Pentacles

Zoë: These are two characters who are here alongside each other and weathering that storm. Being that it is reversed and next to the Devil and the Four of Wands, to me has to do with breaking that balance and relying on the tension that can exist within these times and within our relationships, interpersonal relationships, within the institutions, and politically. Where we started here with the Two of Cups these energies have to work in tandem, now we have the grounded reality we are in with the tension and hardship which is causing this fracturing that stops progress.

Alejandra: Immediately, the Hierophant followed by the Nine of Pentacles makes me feel like institutionally there are structures that cannot crumble or be dismantled. I see that actually as being basic tenets of civilization. No matter how much you war with them, the spirit and integrity behind that institution and its history allow it to maintain. There's a certain dignity you can't strip away. The library comes to mind.

Zoë: Right, The Hierophant being someone who acts as a guardian of education.

Alejandra: And the Nine of Pentacles feels like healing is able to transpire, like something is locked into place.

Zoë: The way we refer to magic as the science of love, we look at the Nine of Pentacles as being an affirmation of this character. She has this charisma and this natural ability to create abundance, and this lush environment around her that sustains both she and everything that surrounds her. That's tapping into something deeply connected to her identity and an ability to thrive without finding a place within these institutions. This speaks to the strength in the identity of Detroiters and our ability, regardless of the tension that persists, this is about the entrepreneurialism, the spirit, the unbreakable spirit that nurtures ourselves and our community. This is a powerful pairing.

Two of Wands (reversed) and The Magician

Zoë: Somebody leaving a position of power.

Alejandra: I also thought with The Magician following it, somebody steps in politically who is a game changer. And with the Two of Wands reversed, it's not a time for expansion, but defensive action. It's about holding down the line. That means, essentially, people need to stop coming in. There's a lot of opportunities here and that's beautiful, but now is not the time to be prospecting.

Alejandra: And not at the expense of the poor.

Zoë: The Magician balances all of these various components of our existence. Within The Magician, I see this ability to have a very broad definition of what it means to be human and how do we embrace our spirituality, and how to implement living with authority that can bring abundance to the collective. He is someone who has a purpose without ego.

Alejandra: The Magican also, they don't have a camp, right? So, they're not resistant to change. The message surrounding The Magician is, "As above, so below." They're neither old nor new.

Zoë: The Magician is a free agent who responds to a higher purpose or calling. They're trying to restore a universal balance.

So what does it all mean?

"I thought there would be a lot more darkness, to be honest," Alejandra says. "I actually thought The Devil would be present. There aren't any cards that symbolize chaos or defeat, and I'm not surprised by that because there is this propensity for people in the city to deal with things as they come."

"We're survivalists. We roll with the punches," Zoë says. "That's why I think the Nine of Pentacles is so important. That's part of Detroit identity through and through. We make beauty out of chaos and oppression that still exists here."

"I feel things wax and wane. It feels that the cycle is changing," Alejandra says. "I have hope."

GeminEye are available for private appointments and events. To inquire, contact them at 313-412-9824, or facebook.com/GeminEyeDetroit.