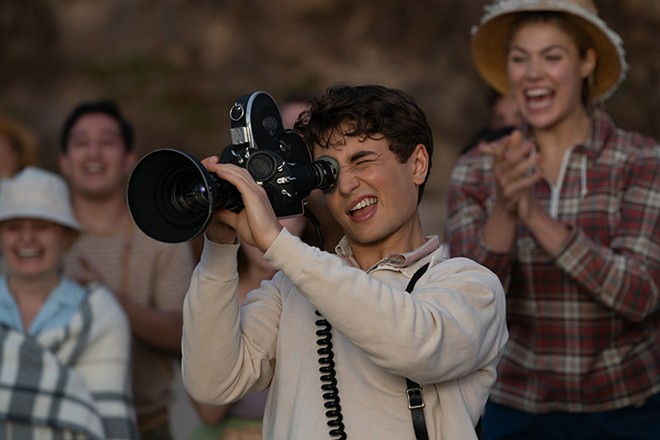 In one of The Fabelmans’ best scenes, three family members — a father, a mother, and a son — work on separate creative tasks as a force moves between them. The mother dutifully practices the piano, retreating into her instrument as its tones carry through the house. The father sits with a notepad across from her, seeming to make notes as he listens. At the same time, upstairs, their son Sammy engages in the rhythmic tasks of film editing on an analog bench, working on a short work dedicated to his mother at his father’s secret request. Living amid the tensions of these related forms of work, and treating film as a few of the things it can most naturally be — both documentary and a creative expression — Steven Spielberg’s latest film concerns itself with what Sammy’s work reveals. Alone in the dark, he’s left to map out his vision of the world, the specters of both familial and artistic influence carrying through the air.

As a bildungsroman engaged in playful self-mythologizing past the crest of a staggering film career, The Fabelmans manages to prove so buoyant, fluid, and wide-ranging in its concerns that it retains a liveliness one wouldn’t expect from its premise. Recounting a childhood (plainly a close approximation of Spielberg’s own) in which a middle-class Jewish kid falls in love with filmmaking, Tony Kushner’s collaboratively written screenplay frames the form its lead falls head over heels for as something between a science and an art.

Those two poles don’t spring from nowhere; instead, they’re set out in alignment with Sammy’s two quite differently constituted parents. With Sammy (newcomer Gabriel LaBelle for most of the movie) navigating between his mother’s restless creativity and eventual discontent versus his father’s more actualized, if faintly conservative attention to the capital-p Practical (though still creative and well-meaning) disposition as an engineer, the film also presents a study in divergent acting styles. As Mitzi, Sammy’s mother, Michelle Williams plays things nearly to the rafters, appearing in flowing garments (courtesy of costume designer Mark Bridges) that seem like conscious efforts in cultivating a sense of freewheeling looseness her circumstances refuse to allow her. Seeming somehow inadequate to her efforts to express herself amid her lot as a homemaker and a partner to a husband with an accelerating career, these almost proto-hippie garments — like Willliams’s performance — mark Mitzi’s life as one of dreams only partially fulfilled. Characterized through clothes, circumstances, and what she can’t achieve in maneuver or expression during a constricted but changing time, Williams plies the language of mid-century melodramas in striving to get at gesturally what’s hard in the film’s particular moment for women to more plainly show or say.

Appearing in more familiar trappings and textured suits, Paul Dano as Burt, Sammy’s father, speaks with a hushed but warm seriousness, conveying a kind of ardor that’s earnest and unrestrained even as it’s stilted, delivered as it is from his character’s freer place of dorky paternal obliviousness. Conversationally awkward, effortfully polite, and sometimes blithe, Dano’s gee-whiz mannerisms paper over a simmering temper and the fact that harms often arise from the best sorts of intentions — making for a less eccentric, more actorly performance, in contemporary terms, than Williams’s.

In this familial context, Sammy’s life exists in the context of a kind of turf war waged between his parents — albeit one fought through soft means, rarely erupting into anything too fierce. When either parent pushes Sammy in a particular direction, they do so as something like peers, expressing needs or grievances they’re (somewhat cheaply) leveraging parental authority and a sense of obligation to either satisfy or air.

This running conflict lends The Fabelmans only a loose structure, one which trusts its meanderings to be as rewarding as any throughline might. (This tension, between the “practical” expectations of linear plotting and more intuitive draw of exploratory, episodic musings, enriches the film in parallel with the binarized polarities that tug at its young lead.) As it advances, and as Sammy moves through childhood into his late teens, the film’s tone and focus shift to and away from his parents, across states, and between the daily work of artistic craft and hostile confrontations at school. The film’s movements across episodes need not assume or deliver a sense of reliable progress, only a sense of occurrence, texture, and feeling, least of all because we know as viewers where the story ends. It’s inevitable (which partly curbs the film’s sense of suspense or risk) that Sammy will succeed, that he’ll go on to have a career first in television and then remake an industry, just as his maker’s been lucky enough to have.

But this sense of wandering is mostly a virtue, interrupted at intervals by the sorts of pep talks about self-fulfillment and pressurized questions regarding direction in life so familiar to coming-of-age fare. (For examples of these tropes grievous enough to sink a like autobiographical film, one need only look to 2014’s Boyhood, but The Fabelmans, thankfully, survives them.) This sense of integrity is undeniably helped by Spielberg’s chops as a narrative entertainer, as well as Kushner’s wry, largely balanced writing work (only occasionally devolving into self-gratifying coyness).

Janusz Kamiński’s characteristically freakish work as a cinematographer and lighting designer makes an ongoing case for itself here, too — a collaboration which tends to make Spielberg’s work far stranger and more expressive than it’s often given credit for. Toying with film formats and some elemental, almost primitive techniques of camera placement, blocking, and light, there’s something rich (if self-flattering) about Spielberg retracing his first steps in filmmaking as he does here, restaging his past with a sense of good-hearted bemusement married to aesthetic inquiry.

Of The Fabelmans’ many fine features, its approach to influence stands as one of its best. Positioning Spielberg’s early work (and, by extension, his later output) as products as much of history, collaboration, and personal experience as anything resembling authorial originality, his portrayal of filmmaking as a process acknowledges, in a work with few sharp edges, the volatility of the relationship between input and effect. In other words, it accounts for the inability of any calculation to plot the links between creative effort and audience response. As with the spheres of physical science and creative artistry which the film charts a course between, the tensions inherent to the medium present mysteries that can be navigated but never resolved. Readily acknowledging the limits of what a career of often striving films can do, Spielberg situates his work modestly here in the slipsteams of cultural history, dealing with it both as a product of both his experiential limits, his influences, and his time. Less imagining here that he could change the world than that he might reframe it, his craft is framed mostly as not too much more than a welcome — and hopefully stirring — diversion in the end.